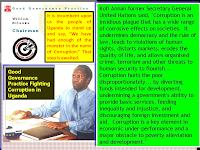 Sam Kuteesa and others stepped aside despite Museveni's call for them not to
Kutesa, Nasasira and Rukutana went ahead and stepped aside
President Museveni told Sam Kutesa, John Nasasira and Mwesigwa Rukutana it was not necessary to step aside but they went ahead and quit, The Observer can reveal.
The three stepped aside from their ministerial posts on the eve of their trial in the Anti-Corruption Court on charges of misappropriating funds for Commonwealth meeting preparations in 2007.
A State House source has told us that Museveni met the trio on October 11, a day before their much-publicised resignations.
They wanted Museveni to approve what they described as “our humble” request to “resign” from cabinet. They told the President that the believed the anti-corruption tsar Raphael Baku and his office are being used to fight proxy and politically motivated wars.
The trio, we have been told, reckon that an influential person in government is using the Inspectorate of Government (IG) to fight them. Our sources further revealed that the embattled ministers also told Museveni that in order to allow justice to prevail and the truth to come out, it was better for them to step aside while the law takes its course.
Museveni, however, refused to buy their view. Instead, the President told them to be strong and not to panic because the cases against them are not solid in his view. We have been told that during this brief meeting, which started at 3pm and ended at 4pm, Museveni thought he had managed to convince the ministers not to resign.
But the three came out of the one-hour meeting with mixed feelings. Whatever happened later clearly shows that Museveni’s reassurances came to naught, as the ministers “stepped aside” a day before they were paraded in the Anti-Corruption Court over the loss of Shs 14 billion in CHOGM expenditures.
“We have, in order to allow for the due process of the court, which we highly believe in, and in the interest of the party to which we belong and the government we serve, deemed it prudent and desirable to seek leave from our appointing authority so as to step aside, until this matter is concluded,” read part of the statement they issued.
During a media briefing at Nakasero state lodge, the President said the ministers’ resignation was “their decision”. The President also told journalists that he would investigate if indeed some institutions are being used to fight political battles. Specifically addressing himself to former Vice President, Prof Gilbert Bukenya’s CHOGM indictment, Museveni suggested that Bukenya is a victim of political bickering within the ruling party.
“Be careful not to spoil our institutions. They were put in place to help people; not to fight wars. If I, as the commander in chief of the army, decide to use it to fight personal wars everywhere, that will not be right,” Museveni said.
While he did not point out the institutions he was referring to, the Inspectorate of Government under Raphael Baku has previously been accused of selective prosecution. Baku in particular has been accused of protecting Prime Minister Amama Mbabazi, who he used to work for.