OBUA'S SUSPENSION WAS A BIG MISTAKE DUE TO EMOTIONS RULING

Devastated Bobby apologises:A glum Cranes coaching team and players after the match
We all make mistakes, however, the suspension of Obua at the eleventh hour was a very big emotional mistake. There was no reason to suspend Obua at that critical time when he could be summoned after the match. The team mates must have known that things were not to be as expected. Emotions are a big problem, and may be, if obua had been left, Uganda would have got a goal.
William Kituuka Kiwanuka 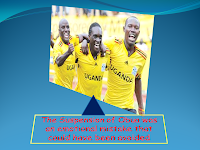 Uganda Cranes striker David Obua has urged Ugandans to come out in force to support the team in their match up with Kenya's Harambee stars on Saturday 8 October 2011.
Both sides are in need of a win to enhance their chances of qualification for the 2012 AFCON championships, with the Cranes knowing a win will definitely put them through to the finals.
However, Kenya will arrive in Kampala with ambitions of their own and Scottish based striker Obua knows it will be tough, hence the need for Ugandan's to come out in large numbers.
-We do not need to be reminded about anything. We know what’s at stake. We know what to expect and what we have to do. The situation alone is enough motivation for us.
-All we ask fans is to believe in us and push us all the way as we try to finish off the job, he told the New Vision.

According to the report, the Cranes spent the whole of Thursday 6 October 2011, working on doubling up on the talented Harambee stars midfield players.
Coach Bobby Williamson continually reminded his team to stay compact in the match to try and stifle the main trio of Kenya's creative talent: McDonald Mariga, Victor Wanyama and Dennis Oliech.
Captain Ibrahim Sekagya will lead the team out at Namboole on Saturday and he was cautious but confident of delivering a good performance.
-They have a decent side but we will be prepared, he said.
The Ugandans have been preparing at the match venue the Namboole stadium all week in readiness for the match.

Cranes defender Nestroy Kizito feels dejected after the final whistle. But he was not alone, the whole nation felt the same as Uganda drew with Kenya. PHOTO BY EDDIE CHICCO
By Andrew Mwanguhya

Judie Boucher’s Tears On My Pillow could be mellow but it might not have consoled 33 million Ugandans last night, much worse, the Cranes players. None of them had the courage to leave the dressing room after drawing goalless with Kenya yesterday at Namboole Stadium to postpone the Nations Cup wait until South Africa 2013.

The Saturday fixture, on the eve of Uganda’s 49th Independence anniversay, ended with a mixture of humiliation and controversy as they were held to a goalless draw by the Kenyan side. The sounds from vuvuzela, ululation and dancing that defined the mood of the fans for hours before the match, turned into moans and abject dejection and despair as they quietly walked out of the stadium, with some fans letting tears freely flow.

The players could not hide the depression as well, while some cried uncontrollably other lay motionless on the pitch.
“It’s been a good campaign. We have the fans some great moments and scored lots of goals. I am devastated most especially for the players who gave their all throughout the campaign,” Bobby Williamson, the Cranes coach, said.

Yesterday’s draw means the Cranes now lose out to Angola, who were 2-0 winners over Guinea Bissau to top Group J with 12 points. Uganda, who had to win to end the 34-year wait since playing at the Nations Cup, have yet again failed on the big occasion. Just like in 1993 when Adam Ssemugabi had to score a penalty against Nigeria for Uganda to qualify but squandered it.

What went wrong?
Kenya’s coach Zedekiah Otieno partly explains it. “Uganda have themselves to blame,” he said, “They had the chances but failed to utilise them.”

Brian Umony, who had a spirited game despite failing to find the net, should have scored when he turned James Situma inside the area but his low drive went inches wide.

Moses Oloya, a second half substitute for tired Vincent Kayizzi on the right midfield, should have connected the cross from his fellow substitute Mike Mutyaba, who came on for Mike Sserumaga, first time rather than control with Kenyan goalkeeper Arnold Origi Otieno at his mercy.

Before coming off, Sserumaga himself should have buried the ghost but his shot shook the woodwork.

Geoffrey Massa won good headers early on but failed to have an impact on the game with some poor decisions, and when his replacement Geoffrey Sserunkuma came on late, he had his drive in the area saved brilliantly by Origi. Origi was impressive on the day, standing firm every time Uganda probed. Tonny Mawejje in the midfield at times carelessly lost possession but Musa Mudde covered.

The hunger was there in the Cranes team. You could see it. Onyango was less troubled in goal, ensuring Uganda finish the campaign without conceding a goal at home, but that clean ball from the midfield to the strikers and a smart finish lacked.
Bobby, knowing the Cranes had to score, especially that Angola were leading in Bissau, did what he exactly had to do--bringing on attackers Mutyaba, Sserunkuma and Oloya--but the Stars stood their ground.
Yes, Uganda played well, but in this business it is goals, not displays, that count.

Missed Obua?
However, yesterday’s loss will be overshadowed forever in the minds of soccer fans and the players as they reflect on the moment that robbed them of a glorious opportunity.

That moment came just 24 hours before the match, when Cranes utility player David Obua was suspended by Bobby over what he said was indiscipline. Thousands of fans who braved the morning rain and hoped that this move would not affect the game could not hold their disappointment afterward; all blaming Fufa boss Lawrence Mulindwa for the loss.

The suspension of top scorer Obua has been pointed out as partly the reason for the failure. The timing by Fufa to send him away from camp with less than 24 hours before the country’s most important game in three decades told of amateur administrative decisions.

But whether the Obua incident had a hand in Uganda failing to score for the first time at home this campaign is out for the jury. He could still have played and the result been the same Yet again, history will haunt that Cranes have not scored a goal without Obua on the pitch since 2006.

The Hearts forward, who also missed the barren reverse fixture last October, has ended the campaign as Cranes’ top scorer with two goals in four games.

Cranes, Obua, Bobby’s futures
Well, the Cranes can get back to the drawing board and prepare for the preliminaries of the 2013 Nations Cup in South Africa. Had Uganda qualified for next year’s finals, they would have played just one home and away engagement with any team that emerged from the preliminaries.

None of the Cranes players had the courage to leave the dressing room after drawing goalless with Kenya yesterday at Namboole Stadium to postpone the Nations Cup wait for at least another year, at least until South Africa 2013.
Many cried but the captain of the ‘now-sunk’ ship was firmly cast in the light. Coach Bobby Williamson came here three years ago with a simple script – deliver Uganda to the continental event.
He even strayed way out of the line as Angola beat Guinea Bissau 2-0 away to collect 12 points, one more than Uganda and just enough to qualify.
“How Guinea Bissau can be 3-0 down at halftime when they play well at home just beats me,” he added about a game which Angola were up 1-0 at recess. “I wish Angola all the best at the finals.” The pain of Cranes leading the group right from the first whistle then choking was too much to bear.
And the Scot did expect his future to come into the picture yet Fufa have on many occasions refused to give details on how long he will be here or how much he earns since his arrival back in September 2008.
“I cannot discuss my future now. The future is good for Ugandan football, you saw the young players who came off the bench and almost got us the goal we needed,” Bobby, 50, said. Substitutes Moses Oloya and Mike Mutyaba, both playing in this consistent side for the past few years, went close but the lone goal Uganda needed never came. During the interview, Bobby repeatedly thanked the fans. “The fans came in numbers and gave us support in addition to the President, ministers and Members of Parliament.”
So will Bobby be here when the next qualification campaign starts next year? “I love working for football and I love working for these people. I will be here unless those in charge have other ideas. “It’s been a good campaign. We have given the fans some great moments and scored lots of goals. I am devastated most especially for the players who gave their all throughout the campaign.”