TIME IS NOW TO FIGHT CORRUPTION IN UGANDA; THE WAY FORWARD 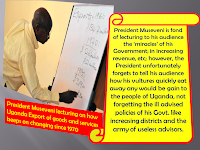 Organizations involved in the corruption war in Uganda are the only solution to the scavengers that are turning Uganda broke and inducing abject poverty to our people. We must stop this business of just talking about thieves as they accumulate at the expense of Ugandans and posterity. The way forward is for organizations involved in the anti corruption crusade to raise money from all possible sources and advertise to pay handsomely whoever can give concrete information leading to exposure of those who are looting the country. This will help to get information as it is a fact that the deals which lead the country broke are undertaken with the knowledge of many people who if given incentives may easily give details of the information so that recoveries are made or a record is kept so that recoveries are done at the appropriate time if the NRM Government is reluctant to see recoveries made.

William Kituuka Kiwanuka
Why Law Makers made a U- turn

Most lawmakers baying for the blood of ministers who allegedly pocketed billions of shillings as kickbacks, and demanding their resignation, have dramatically made a u-turn and are planning to rescind decisions they took on the floor of Parliament during the explosive debate.
Uganda’s Parliament, on October 12, unanimously voted to have Prime Minister Amama Mbabazi, foreign affairs minister Sam Kutesa and internal affairs minister Hillary Onek step down and give way for an ad hoc committee to investigate allegations of bribery against them.
“Enough is enough on corruption; there is no smoke without fire. I don’t see any problem in resigning a job once you’re suspected. The President can send them on leave to give way for investigations,” Gen Elly Tumwine, an army representative and close confidant to the President, argued then.
The resolution was one of the ten for which MPs voted after two days of heated debate.