LUKWAGO SHOULD BE GENDER BALANCED WHEN APPOINTING A DEPUTY 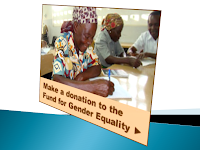 Lukwago should be Gender balanced when considering the Deputy Lord Mayor

It is bad news to see that some people in responsible positions don’t see the logic in gender balance. It defeats good understanding to see that the Lord mayor cannot realize the importance of gender balance at this moment in time when world wide there are strategies to see the inequality between men and women addressed.

I wish to appeal to The Lord Mayor to consider a woman whether NRM or opposition for the position of Deputy Lord Mayor.

Gender refers to socially and culturally defined roles, attributes, and privileges of females and males. Gender inequality may be understood in three dimensions; that is inequality under the law, inequality of opportunity in economic, political, social and other fields as well as inequality in dignity of the person between women and men. Gender inequality is a concern in the process of development because it is greatly responsible for the bad indicators associated with women the reason that explains the poverty and deprivation they are associated with. Gender inequality and poverty are the result of distinct though interlocking, social relations and processes. Women’s experience of poverty is mediated by social relations of gender. On the other hand, gender affects critical factors contributing to poverty risks: income, opportunity, security and empowerment. Gender inequality is reviewed in the context of capabilities (health and education), opportunities (employment, access to economic services, and time) and levels of employment (ownership of productive assets, participation in governance, and access to justice). Gender equality is not just a question of justice that women and men should have equal opportunities in all aspects of life; it is a question of good economics and is essential for development. Cross - country experiences have shown that in situations where technology or other economic conditions change rapidly, human capital will have a key impact on growth. One of the key lessons of development experiences is that development activities function much more effectively if all people are empowered.

In “Gender Inequality in Uganda: The Status, Causes and Effects,” Discussion Paper 11 of August 2006 by the Ministry of Finance, Planning and Economic Development, it was found that within households, women were more likely to fall sick compared to men. However, women received disproportionately less treatment when sick compared to men. Since awareness about HIV/AIDS is equally high for both women and men, the fact that the prevalence is higher among women is a result of unequal gender relations within households. Literacy rates are unequal with women having a rate far below the national average while the men are above. More females are unemployed compared to males; in urban areas, the unemployment rate for women more than doubles that of men. In rural Uganda, poor women work between 12 and 18 hours per day, with a mean average of 15 hours, compared with an average male working day of approximately 8 – 10 hours. The main source of discrepancy is women’s heavier commitment to their reproductive roles (child rearing/care of family members) and the additional responsibility for the family food security. At household level, it is the decision making that counts. In many cases men make the decisions because they are the breadwinners.
In Uganda, women’s rights are limited both by the inequitable legal structure and by traditional practice. Data shows that female – headed households have less land than male headed households. Women own only 7% of the registered land in Uganda. For all types of livestock, women headed households were less endowed compared to their male counterparts. It was also evident that women owned mostly chicken and goats. It is surprising to note that many women (70%) accepted domestic violence and could not report because the offenders are their partners. This is a sign of disempowerment.
The Gender Analysis of Uganda Household Survey Data 1992 – 2003 shows that female headed households were more disproportionately represented among the chronically poor, and the households moving into poverty. There is a well established link between education and fertility in Uganda.
UN Women, through the Fund for Gender Equality, Kicks Off New Call for Proposals on Women’s Empowerment in Arab State
UN Women Press Release
For immediate release
Media Contact: Oisika Chakrabarti, Media Specialist, oisika.chakrabarti[at]unwomen.org, +1 646 781-4522.
High impact political and economic empowerment programmes sought, grantees to be announced in December; other regions to follow
United Nations, New York — UN Women’s Fund for Gender Equality, a grantmaking fund initiated by Spain and dedicated to advancing women’s rights and gender equality, announced today its second Call for Proposals, inviting women’s organizations and government agencies to apply for grants to support women’s political and economic empowerment. In recognition of the recent developments in the Arab States region, which have created additional opportunities for supporting efforts to improve the life conditions of women and girls, the first phase of the Fund’s 2011–2012 call will immediately focus on proposals that seek to empower women and their communities in this region.
“UN Women supports the participation and rights of women in the Arab States, and the Fund for Gender Equality can bolster women’s empowerment and participation during this time of transition,” said Michelle Bachelet, Under-Secretary-General and Executive Director of UN Women. “We hope that these grants support women in their quest for democracy, equality and political participation.” UN Women administers and oversees the Fund for Gender Equality.
The Fund has set aside USD 16 million for its 2011–2012 grantmaking cycle, with USD 4 million projected for grants in the Arab States and more if contributions during this grantmaking cycle increase. Grants will start at USD 200,000 for initiatives that make tangible improvements in the lives of women and girls. The Fund will accept proposals from Algeria, Bahrain, Egypt, Iraq, Jordan, Kuwait, Lebanon, Libya, Morocco, the occupied Palestinian territory, Oman, Qatar, Saudi Arabia, Syria, Tunisia, United Arab Emirates and Yemen. Applicants may download the Call for Proposals and Grant Application at http://www.unwomen.org/fge/application-guidelines/. The first set of grants will be announced in December 2011.
In 2012, the Fund will complete the second grant cycle by inviting grant proposals from Africa, Asia and the Pacific, Latin America and the Caribbean, and Eastern Europe and Central Asia.
The Fund is one of the leading grantmaking funds on gender equality in the world. Created in 2009 with an initial contribution of USD 65 million (EUR 50 million) from the Government of Spain, it now has expanded with contributions from Norway and Mexico.
To continue to significantly advance gender equality and women’s rights through grantmaking of this scale, UN Women calls on UN Member States, the private sector, and individuals to contribute to this vital source of funding for women and gender equality advocates by contacting the Fund at fund.genderequality@unwomen.org.
For additional information, visit http://www.unwomen.org/fge/.

Prior to the voting, drama ensued in the meeting hall when Mr Luyiga was tricked by his NRM counterparts to sign a Memorandum of Understanding with them in exchange for support.

The approval
When the meeting reconvened in the afternoon for voting, Mr Luyiga sat on the NRM side but was shocked to see majority endorsing his opponent to take up the third top post in the KCCA hierarchy.

NRM councillors, who constitute majority of the council, had earlier vowed not to endorse any of the two nominees, saying none of them belonged to their party. “By the virtue of the authority entrusted to me, I appoint Sulaiman Kidandala the deputy Lord Mayor of Kampala City,” Mr Lukwago told the meeting.

Mr Kidandala was seconded by Councillor Angela Kigonya [Rubaga Division]. Out of the 31 councillors, 20 belong to the NRM while 11 subscribe to the opposition and some are independent. The meeting, which began at 10am at City Hall, suspended other businesses to fill the position of deputy Lord Mayor which has been vacant for at least five months.
Share This Story
Share

In his acceptance speech shortly after the meeting, Mr Kidandala pledged to work with Mr Lukwago and serve the people of Kampala to their expectations. “It is a great day for me and I thank the Authority for entrusting me with such responsibility. I am faced with several challenges but I will work hand in hand with him (Lukwago) to serve Kampala,” Mr Kidandala said. Section 9(3) of the Kampala Capital City Act, 2010 empowers the Lord Mayor to appoint his deputy from among the councillors.

Recently, the councillors grilled Mr Lukwago over his delay to appoint a deputy and steering committees, saying it had frustrated the Authority’s operations. Apart from appointing a deputy, the Lord Mayor is also expected to draft rules of procedure and thereafter spearhead the formation of committees that oversee the running of the authority.

Section 11(20) of the same Act empowers the deputy Lord Mayor to assist the Lord Mayor in the performance of his functions and otherwise deputise him in his absence.

While the new law governing Kampala gives the executive director more control over city affairs, the Lord Mayor and his deputy still have a big voice.

They are mandated to spearhead the formulation of laws, policies, and programmes and make sure that the technical team implements them. They also oversee their implementation. The duo also has a few other functions, which include presiding over the authority’s meetings, hosting foreign and local dignitaries and ceremonial functions.