IS THERE ANY HOPE IN UGANDA GIVEN THE CORRUPTION? 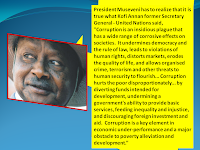 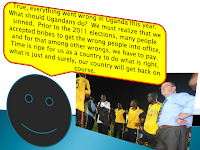 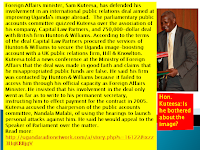 Mr Karuhanga said he was “ready to die for telling the truth” as he identified Foreign Affairs Minister Sam Kutesa, former Energy Minister, now Minister for Internal Affairs Minister Hillary Onek and former Security Minister now Prime Minister Mbabazi as the alleged beneficiaries.
Mr Karuhanga said Mr Kutesa was at one point given Power of Attorney by Tullow Oil, a British company involved in oil activities in Uganda, and that he received Euros 17.5 million (about Shs68.5 billion).
The money was allegedly processed under the name of the East Africa Development Limited in Nairobi, Kenya. Under the deal, Mr Karuhanga said Mr Kutesa was to receive the money through his bank, EFK bank in Zurich. According to the dossier, between June 21 and August 2010, Eng. Onek received a total of Euros 5.6 million (about Shs21.9 billion) from Tullow Oil, reportedly paid in several installments.
It is alleged that Onek received the money through an Emirates Bank account in Dubai, United Arab Emirates (UAE). Mr Karuhanga told Parliament that Tullow pledged $100 million (about Shs286.4 billion) to “these well connected influential Ugandans” in relation to the arbitration case in London.
MPs demand halt in govt oil deals citing bribery

Mr Karuhanga said it was in Tullow’s interest that Heritage Oil, which sold its stake to Tullow, drags government of Uganda to London for arbitration in order to set up a precedent to be used by other oil companies in farming out their interests from Uganda.
The Ugandan team of alleged beneficiaries to this pay-out is referred to as “experts”. They were reportedly led by Mr Kutesa. Others were Mr Onek, former Acting Solicitor General and now a judge Mr Billy Kainamura and the Deputy Secretary to the Treasury Keith Muhakanizi. It’s alleged that their payment was for “professional services”.
These accusations come at a time when Mr Kutesa and two other ministers are supposed to appear before the Anti-Corruption Court on Thursday to answer charges relating to the misuse of Shs14 billion in Chogm funds.
In another dossier titled: “Tullow sees corruption in oil sector,” Mr Karuhanga said Tullow vice president for Africa Tim O’Hanlon identified Security Minister Amama Mbabazi and Onek as Ugandan officials who benefited from the attempted sale of production rights by Heritage Oil and Gas to Italian company ENI.
A visibly agitated Mr Kutesa, who stood on a point of order amid a barrage of taunts from lawmakers, denied the allegations.
“Hon. Karuhanga has alleged that I received bribes through my company in Nairobi, is it in order to use this House and the privileges attached to members to table falsehoods? Is he in order to make defamatory statements against me which are false and well-knowing that that he cannot repeat them outside this chamber,” Mr Kutesa said.
Mr Kutesa accused Mr Karuhanga of using forged documents “that have been circulating in the city”.
While Eng. Onek was not in the House, Mr Mbabazi did not say a word. The Speaker adjourned the debate to today 11am.

Former Energy Minister Hillary Onek is one of the ministers whose name came up during the oil agreements' debate in parliament
By Yasiin Mugerwa
Posted Tuesday, October 11 2011 at 00:00

The government came under attack for conniving with foreign oil companies as petitioners who forced a recall of Parliament from recess to discuss a matter of urgent national importance led debate on the oil sector.
In a bipartisan oil petition presented by Lwemiyaga MP Theodore Ssekikubo (NRM) and seconded by Bugweri MP Abdul Katuntu (FDC), the lawmakers demanded an immediate halt on executing oil contracts and all other transactions until necessary laws have been passed by Parliament to put into effect the National Oil and Gas Policy.
The lawmakers have also demanded that the government tables all the relevant Bills within 30 days, reviews the Production Sharing Agreements, accounts for the revenues so far received from oil dealings, desists from executing any contract in the oil industry with confidentiality clauses and sets up a judicial commission of inquiry headed by a Supreme Court Judge to investigate ministers named in bribery scandals. They also want the government to withhold the consent to the transactions between Tullow Oil (U) Ltd, Total and CNOOC, reportedly slated for October 15, before capital gains tax assessed by URA payable by Tullow is paid in advance and a report to that effect is made to Parliament.
The government was also asked to explain how it procured foreign lawyers in the Heritage Oil case in London.
Mr Ssekikubo told the House that although Uganda is supposed to pay for the costs incurred during the exploration and production process, the oil companies are cheating Ugandans through exorbitant salaries for themselves and their employees.
He tabled documents indicating that some employees of Tullow with certificates in catering were being paid between Shs36 million and Shs54 million per person per month.
The documents also put local representation in terms of employment in the oil sector at only 30 per cent.
Parliament heard from the Lwemiyaga MP that for accommodation and feeding, each employee pays about $201 per day (about Shs560,000).
The money according to Mr Ssekikubo is shared by contractors linked to “powerful Ugandans” in government.
Mr Ssekikubo told Parliament that instead of establishing a parking yard in western Uganda where the oil is located, the government allegedly allowed Tullow through a company owned by Prime Minister Amama Mbabazi’s daughter Nina Mbabazi and a one, Mathew Rukikaire to establish the yard in Kiira, a Kampala suburb.
“One wonders the rationale of having a yard in Kampala yet oil fields are in Hoima. All these are tricks to abuse public funds,” Mr Ssekikubo said.
“Neither matooke nor fish is bought from the local people; these people get their food from Kampala because some people in government cut deals,” Mr Ssekikubo said.
“We are paying $120,000 per day for rigs which were brought yet they are idle. The companies are not losing anything because at the end of the day, they are supposed to recover their costs,” he added.
Attorney General Peter Nyombi attempted to stop the debate claiming that it was prejudicial to a court process underway in London but was overruled by Speaker Rebecca Kadaga.