AS MINISTERS PREPARE TO VISIT BUKENYA IN LUZIRA, THEY SHOULD MAKE SURE CONDITIONS IMPROVE AS MANY ARE POTENTIAL CANDIDATES OF THE SAME 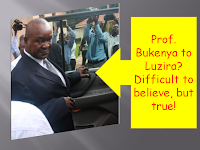 AS MINISTERS PREPARE TO VISIT BUKENYA IN LUZIRA, THEY SHOULD MAKE SURE CONDITIONS IMPROVE AS MANY ARE POTENTIAL CANDIDATES OF THE SAME
Can we have Luzira a better place? The NRM Government should be aware that anybody can tomorrow got to Luzira given the various mistakes done including involvement in corruption (outright stealing of tax payer money which is like a norm today by many who are well connected).
William Kituuka Kiwanuka

The Cabinet has announced a plan to visit incarcerated former Vice President Prof. Gilbert Bukenya, who today marks five days in Luzira Prisons.
Cabinet held several meetings on the matter and according to government spokesperson, Ms Mary Karooro Okurut, the date for the visit will be communicated later. “Bukenya is a senior citizen and of advanced age who should be treated with decorum,” Ms Karooro told journalists at the Media Centre.
Ms Karooro’s communication comes a day after the Minister in-charge of the Presidency, Ms Kabakumba Masiko, told the media that President Museveni was very much concerned about Prof. Bukenya’s health in the Luzira Prison, hence appealing for his bail application hearing to be brought forward.
Ms Karooro defended the President’s request for a speedy bail hearing for Prof. Bukenya, saying its legal. She, however, denied that Mr Museveni had ordered a speedy bail hearing as had been portrayed in the media, but that he “had merely asked.” “The President’s statements aren’t an interference to court processes. The President isn’t ordering courts but asking because he got legal advice from the Attorney General,” she said.
On Thursday, the Judiciary said it would stick to its constitutional mandate in dispensing justice irrespective of President Museveni’s reported comments. The High Court has set Tuesday as the date for hearing the bail application case.
Prof. Bukenya was remanded to Luzira Prison on Monday over charges of abuse of office, for his role in the expenditure of Shs9.4 billion during the 2007 Common wealth Heads of Government Meeting. (Chogm).