BLAME DISUNITY OF THE OPPOSITION FOR SINGH'S VICTORY

If Uganda's opposition were a united force the number of Movement MP's would not be what they are in Parliament. The opposition as I noted earlier were 'confident' of making it each in own capacity hence ending up with so many candidates contesting against the Movement one's who were well armed having been in power for 25 years. If the opposition leaders unit and agree on joint leadership without favouring a particular one, chances are that there will be a step forward. If nothing of the sort is realized, the opposition should be ready for more frustrations as is the case of Kasibante.
William Kituuka Kiwanuka 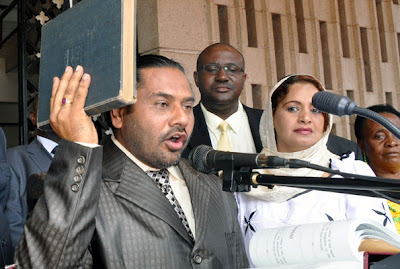 By Anthony Wesaka (email the author)

Posted Tuesday, May 17 2011 at 00:00
Attempts by Mr Moses Kasibante to stop the swearing-in of his rival Singh Katongole for the Rubaga North parliamentary seat yesterday proved futile as the latter was sworn in a day earlier than scheduled.

Mr Kasibante was later to suffer more frustration when he was arrested at Nakulabye. His Plan B was to block his rival’s swearing-in before court could dispose of a counter petition.

According to the initial schedule, Mr Katongole was scheduled to take his oath today but instead took it yesterday in what his rival called NRM’s plan to deny the people of Rubaga North proper representation in Parliament.

However, the spokesperson of Parliament, Ms Helen Kaweesa, backed the changes to have Mr Katongole take his oath a day earlier than scheduled on grounds that he had to travel abroad for medical treatment.

“Mr Katongole wrote to us last week requesting to be sworn-in a day earlier because he is flying out of the country for medical operation. His request was accordingly granted,” Ms Kaweesa said.

When he learnt of the developments, Mr Kasibante rushed to Nakulabye to brief his supporters and in the company of about 15 of them, he was confronted by police, who ordered them to disperse.

As the group headed to Kasubi, they were intercepted and supporters tried to resist his arrest but were overpowered. He was whisked off to Old Kampala Police Station where he was still being held by press time.
Kampala returning officer, Ms Molly Mutazindwa, in February declared Mr Kasibante winner with 24,054 votes against NRM’s Katongole, who polled 18,595 votes.

But Mr Katongole sought a vote re-count at Mengo Magistrate’s Court, which was granted and effected despite a High Court injunction against it.

Ms Mutazindwa then declared Mr Katongole the winner with 24,802 votes to Kasibante’s 22,850 votes. Mr Katongole was then hurriedly gazetted the same day.

Mr Kasibante yesterday, vowed to fight on to reclaim his “robbed victory”. His election petition hearing starts soon at the High Court in Kampala.
Posted by williamkituuka.com at 12:44 AM