The Uganda Police is fond of telling those who intend to demonstrate to seek its clearance, however, Uganda Police ought to be more serious. By now they should be aware of the damage caused when they interfere in would be peaceful demonstrations. If the Law Society members want to demonstrate over a right cause given the prevailing situation, then the saying that they have to clear with the Police does not hold simply because they should just move in to see how a peaceful demonstration is undertaken. The use of excessive force will not help Uganda more so that the problems the country finds itself are greatly related to the overstay of Museveni in power.
William Kituuka Kiwanuka

By APOLLO MUBIRU
Lawyers have started a three-day sit down strike at the High Court in Kampala protesting what they call excessive use force by the Police and the army in quelling demonstrations over rising food and fuel prices.
Uganda Law Society (ULS) president, Bruce Kyerere, said government should apologize to Ugandans for the lives lost, injuries and the damages caused in the recent protests in Kampala and other towns.
"There is upfront abuse of rule of law and human rights from security state organs and we don’t see remorse from government,"Kyerere said.
He explained that during the three-day strike, Lawyers will not go to Court to represent their clients as well as transacting any legal deals.
The advocates will hand over a petition to the Chief Justice, Benjamin Odoki, detailing their grievances.
"This is to make a statement of displeasure on police brutality and the conduct of judiciary in the manner in which they are handling cases of arrested demonstrators," he said.
Last Thursday, security officials blocked Uganda's main opposition leader, Kizza Besigye, as he drove to work, sparking a standoff that ended in his arrest after a plain clothed Policeman smashed his car windows and doused him in pepper spray. 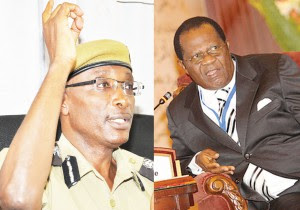 Weeks of opposition-led protests because of rising food and fuel prices in the country have sharpened divisions and not smoothed them. The start today of a three-day sit-down strike by Ugandan lawyers has put Chief Justice Benjamin
Odoki and police chief Maj Gen Kale Kayihura on a warring path.
While Kayihura has warned lawyers against the protest and said police will not okay any demonstration, Odoki told The Razor in an exclusive interview yesterday
that lawyers “have got a right to strike”.
Their difference in opinion has put the two men on different sides of the political pedestal and has left Kayihura in an unenviable situation. A trained lawyer, Kayihura finds himself with the task of stopping his fellow lawyers from exercising
their right to protest.
The Uganda Law Society (ULS) announced that lawyers across the country would lay down their tools and sit peacefully at the High Court buildings throughout the country, starting today for three days, as an expression of discontent at the government’s imperious crackdown on the walk-to-work protestors.
Odoki admitted in the interview that, while the strike may paralyse court business, the lawyers have every right to protest. “I think they have got a right to protest,” he said. “They are independent of the judiciary and if they have any grievances they can protest,” he said.
He added, however: “If they paralyse the courts, it is the p ublic who will suffer. For us, we shall be working because what can we do? We are a public service institution and tomorrow [today] is not a public holiday.”
The lawyers say their protest is inspired in part by the supposed bias of some of judiciary officers and they have singled out recent cases of the walk-to-work protests involving FDC leader Kizza Besigye and other opposition
figures.
Chief Magistrate Justine Atukwasa’s neutrality has been questioned by the lawyers,
who wonder why and how, in a space of days, she was able to hop from one jurisdiction to another to hear Besigye’s case.
Initially, Atukwasa refused to hear Besigye’s bail application at the Nabweru Chief Magistrate’s Court in Wakiso District on the grounds that she was busy, but after the FDC leader had spent six days behind bars she was curiously drafted on to the Nakasongola Court circuit several miles away to preside over the same case and went on to slap a Shs50million non-cash bail on him.
When Besigye was arrested a day later she turned up at the Kasangati Chief Magistrate’s Court to hear fresh allegations of unlawful assembly against him.
In the interview, Odoki admitted that there were grounds for complaint by the lawyers.
“Yes, there could be one or two issues,” he said. “But I don’t know if that [Atukwasa’s hopping] could have changed the decision of the magistrate. Would that change their decision if they had stayed in the same location?”
Odoki said he was prepared “to dialogue with the lawyers” to address their concerns. “We shall deal with that matter. If there is a problem [with Atukwasa], they [lawyers] can apply for revision,” he said.
For his part, Kayihura issued communication through Kampala metropolitan
police spokesman Ibin Ssenkumbi, cautioning the lawyers against leading any demonstration without getting permission from the police.
“If the demonstration is to happen in public places such as roads, then the organisers should meet the concerned people to avoid unnecessary
clashes,” Ssenkumbi said. “At home everyone has control without seeking permission,
but beyond it one is supposed to respect the fundamental rights of others; so they are supposed to get access by informing police to provide them with enough security.”
But the idea of whether or not police should grant permission to anyone intending to protest has proved to be a sticky matter. While it remains to be seen how the police intend to thwart the lawyers, this will be the second time in four years that they are laying down their tools.
In 2007, lawyers and other judicial officers led a sit-down strike protesting at the now infamous Black Mamba attack on the Kampala High Court when security operatives re-arrested Besigye and his co-accused, who had been granted bail pending hearing of a treason case against them.

UGANDAN LAWYERS TO STRIKE OVER CRACKDOWN
Posted on | May 4, 2011

Ugandan lawyers are set to begin a three-day strike Wednesday, to protest the government’s treatment of demonstrators complaining about high food and fuel prices.
The head of the Uganda Law Society Tuesday accused police of using excessive force on the protesters. Society president Bruce Kyerere also questioned the conduct of the courts handling the cases of protesters who were arrested.
Ugandan police have used live ammunition, rubber bullets and tear gas on protesters. During the last three weeks, at least eight people have been killed and more than 250 wounded. Police have arrested hundreds.
Opposition leader Kizza Besigye, who is leading the demonstrations, has been arrested four times this month.Uganda Lawyers to Strike Over Crackdown
The lawyer’s group criticized a magistrate who refused to hear Besigye’s bail request saying she was too busy with other work.
Ugandan President Yoweri Museveni has defended police actions and has vowed to stop the protests. He blames Uganda’s inflation on drought and rising oil prices.
Besigye has led Uganda’s opposition for a decade. He has lost three straight presidential elections to Museveni, who has ruled Uganda since 1986.
Some information for this report was provided by AP, AFP and Reuters.

4 May 2011
The planned picketing of the High Court by lawyers, protesting some magistrates' conduct and the government's brutal response to the walk-to-work protests, is unwelcome, a Judiciary spokesman said yesterday.
Despite this, the Uganda Law Society leadership has insisted the three-day sit-down proceeds today.
ULS president Bruce Kyerere told Daily Monitor he would brief Chief Justice Benjamin Odoki yesterday afternoon, and also indicated that depending on the outcome of that meeting, "the arrangement is as we agreed".
"That is a strike. It is a demonstration. If they are coming for other business outside their legal work, they are unwelcome. Sitting down is not auxilliary to the legal business. They will be unwanted persons," Mr Erias Kisawuzi, who argued the bench is not perfect and is therefore open to dialogue over the matter, said.
The lawyers announced on Monday they would protest what they called "partiality of the Judiciary", and the high-handed response of the police and other security agencies to the ongoing walk-to-work protests.
They demanded action from Justice Odoki against magistrates who appear not to be acting independently as is demanded by the Constitution. Retired Supreme Court Judge, Prof. George Kanyeihamba, concurred yesterday, saying lawyers are free to demonstrate if they feel some judicial officers have taken sides.
Mr Kisawuzi, however, suggested that since lawyers are officers of court, and therefore members of the same family; "we should not be seen in a fracas." He said channels of communication remain open and also proposed a meeting between ULS and Justice Odoki
Several attempts to get a comment from the Chief Justice's chambers wre futile.
Late yesterday, Mr Kisawuzi called this newspaper and confirmed that a meeting took place where it was agreed that ULS delivers its petition in Courtroom 1 of the High Court in Kampala.

Conditions
"They will be allowed in for only purposes of presenting their petition and any other business outside that will not be entertained. Otherwise lawyers are free to demonstrate at their residences and chambers," he said.
Contacted over the matter after Daily Monitor failed to reach Police spokesperson Judith Nabakooba but Kampala Metropolitan Police spokesperson Ibin Ssenkumbi said, "we have not got any request from the management of the High Court to provide them with security".
Mr Ssenkumbi added: "If they have reached an understanding and there's no breach of peace, then we don't need to come in. If the Judiciary feel there's likely to be breach of peace they can always notify us."

In spotlight
At the centre of this matter is Nabweru Court Magistrate Justine Atukwasa. The magistrate's handling of the State's proceedings against opposition leader, Dr Kizza Besigye and others, has brought her impartiality into question. The ULS is also disturbed that although she is officially assigned to Nabweru, Ms Atukwasa turned up in both Nakasongola and Kasangati courts, miles away from her known jurisdiction, to preside over related matters.
"If what we are reading in the papers are true it is most unfortunate. They (lawyers) are right to demand judicial inquiry into her conduct. This can be done administratively. The Chief Justice can appoint a one-man tribunal to do this," Justice Kanyeihamba said. The walk-to-work campaign has seen members of the public, opposition leaders and their supporters shot at, beaten and teargassed by the police in tragic scenes which have seen the death of at least 10 people, including two babies.
Countrywide protests have been met with ruthless force from a combination of police and other security agencies, provoking condemnation from the international community, human rights organisations and religious leaders.
The last time the legal fraternity, including judges and magistrates, went on a one-week strike was when a secret security outfit invaded the High Court premises and re-arrested Dr Besigye and others, who had been freed on bail, pending their trial for alleged treason.
Posted by williamkituuka.com at 12:13 AM