IT IS REAL MADNESS IN UGANDA AS LUBIGI IS ENCROACHED ON 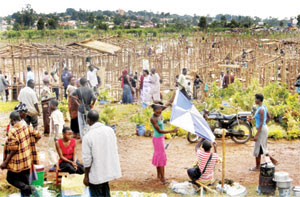 THE Government insists that encroachers on Lubigi Wetland must vacate immediately. The invasion by people claiming to be army veterans has destroyed the wetland, which shields northern parts of Kampala from flooding.

The swamp takes storm water from River Nsooba, whose flood plain at Bwaise has been destroyed after years of reclamation to pave way for settlement.

The water and environment minister, Maria Mutagamba, yesterday said the encroachers would be evicted before the end of the week.

She explained that the encroachers took advantage of the festivities during the swearing-in of the President to encroach on the wetland.

Mutagamba said she had invited the group’s leaders to discuss the matter, but they declined.

By last evening, the minister was scheduled to meet the Inspector of Police, Maj. Gen Kale Kaiyihura, to plan the movement of troops during the eviction.

Environmentalists from Makerere University yesterday said they were concerned about the destruction of the swamp.

“Do we have a Government or a body in charge of the environment? Why are they waiting for the entire swamp to be destroyed? This is not acceptable,” Dr. Chris Bakunetta, a lecturer at Makerere University, said.

The encroachers, who claim to be operating under their umbrella body of Uganda Patriotic Volunteers Association, said they were marginalised street vendors.

But the head of environment Police, Naboth Kusima, described the group as illegal occupants. “We do not know where they have come from but they are going to be evicted.”

Kusima said the group, which raided the swamp last Wednesday night, had by yesterday increased to between 3,000 and 5,000 people.

The spokesperson of the encroachers, Dennis Ssebuwufu, however, said they would not vacate the land.

“We know this is illegal but we also want to work and earn a living,” he said.
Ssebuwufu said they had registered 25,000 people.

By press time yesterday, thousands of people continued to cut the papyrus reeds. Others were setting up makeshift stalls.

The group’s chairperson, Richard Lubwama, said the wetland is part of Kabaka’s land and that they did not need permission from anyone to occupy it.

However, another group also claiming ownership, has threatened to take over the swamp.

There was confusion when a group of youth from Kasubi market threatened to cause chaos, claiming it was their land but the Police intervened and calmed them.

“This is our land and we shall not allow strangers to take it. We are going to fight them until they either give us part of it or vacate,” Kenneth Sonko, their councillor, said.

Dan Kyarimpa, 27, a resident of Nansana, a nearby suburb in Wakiso, said he was happy because he had got a place of work.

One of the occupants who declined to be named said they would occupy the swamp in the same way they took over Wakaliga, the Children’s Park at Wandegeya and part of Namanve forest in Kirinya.

By press time, the crowds continued to ferry eucalyptus poles, heaps of murram and other building materials to construct stalls in the swamp. 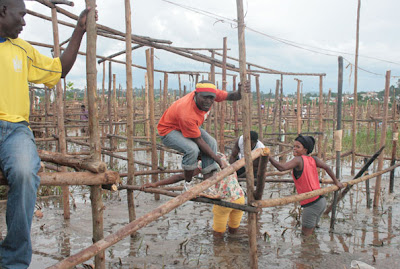 Yesterday, some of the over 2,000 encroachers, who have parcelled out Lubigi wetland, busied themselves with construction of structures. The encroachers, many of whom claim to be NRM veterans, have since Thursday allocated themselves portions of the wetland.

By John Njoroge (email the author)

Posted Tuesday, May 17 2011 at 00:00
A middle aged man is submerged in the marshy Lubigi wetland. He is busy hammering away at what he says will be his new market stall in a few days.

Hajj, as he is repeatedly referred to by his colleagues, says he is a former soldier who lost a used-clothes vending business when fire gutted parts of Owino Market in Kampala last year.

“This is new hope for me and my family,” he said, allowing this reporter to take several pictures of him. “My family and I have suffered since I lost my business. Now I can start all over again.”

Oblivious of the environmental implications of their actions, Hajj and more than 2,500 other encroachers have since last Thursday allocated themselves portions of Lubigi wetland.

Located between the Namungoona roundabout and Sentema Road junction in Kampala, the wetland connects Lubigi Channel to River Mayanja, one of the main tributaries to L. Victoria.

Who allocated wetland?
In what is now turning out to be the worst environmental invasion in Uganda’s recent history, the encroachers have erected semi-permanent structures across a stretch of 2 kilometre of the wetland and are mobilising truckloads of soil to reclaim the ecologically important natural physical feature.

Environmentalists are outraged by the move and have called on government to quickly evict the encroachers to avert an imminent disaster.
The encroachers are, however, adamant.

“We have nowhere to go. This land was given to us by Mzee (President Museveni). If they (government) want us out, let them give us land,” they insisted, adding that the wetland is in fact part of Buganda Kingdom’s land, which they were entitled to.

“If government is setting up a sewage plant, why can’t we set up a market?” a woman shouted. As President Museveni was taking oath of office last Thursday, the encroachers, claiming to be veterans and Kasubi Market traders under the Uganda Patriotic Voluntary Organisation (UPAVO) descended on the wetland and a Uganda National Roads Authority (UNRA) road reserve nearby.

Attempts by UNRA and National Environmental Management Authority (Nema) officials to peacefully remove the encroachers fell on deaf ears. Not even Environment Minister Maria Mutagamba, who visited the wetland over the weekend, was listened to.

At one point, Ms Mutagamba had to be whisked off after the encroachers turned rowdy and tried to attack her for “interfering with their entitlement.”

Ms Mutagamba, however, said she had not received any communication from Mr Museveni to that effect, a thing that infuriated the encroachers, forcing her to be whisked away.

Minister heckled
“If I can see anything in writing that the President has given you this wetland then I will go back to him and say I have received this,” she told them but she was heckled.

As news continues to spread of the mad rush, thousands more continue to stream in, grabbing whatever marshy portion they can lay their hands on.
Those already at the wetland told this newspaper they are determined to build permanent structures for a market while others proudly said they would erect residential structures.

By 3pm yesterday, over 2,500 encroachers had received UPAVO Beneficiaries’ Registration Forms, a sign an individual had identified and allocated himself portions of the swamp. The encroachers hurriedly constructed semi-permanent structures measuring between 4-by-5 feet to 5-by-6 feet.

“Powerful” persons within the group have, however, encroached on even larger portions, the encroachers said. By press time, long queues of thousands more could be seen patiently waiting to receive registration forms for which they paid Shs1,000. Hundreds more could be seen wading through the marsh, others submerged in the water but determined to carve out their own space.