We are aware that women have played a key role in supporting the NRM Government, so they clearly have a right to demand what they deem is due to them. However, the statistics show that women are disadvantaged on many fronts. Those who are fighting for the women rights should endeavour to show women the right things to do, for example have smaller manageable families after practicing family planning. One cannot expect the Government given the trend so far for the 25 years to change all of a sudden. Women should endeavour to have some money on them as they plan to produce hence stop producing as if in a race to see who can produce most.
William Kituuka Kiwanuka
ACTIVISTS STORM COURT OVER MATERNAL DEATHS 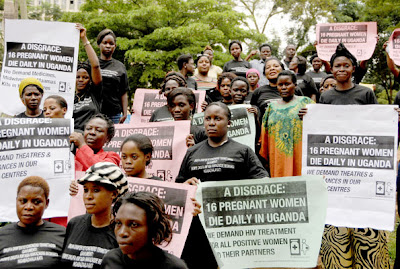 The activists protesting the high maternal deaths at the Constitutional Court. PHOTO BY STEPHEN OTAGE
By Anthony Wesaka (email the author)
Your Email
Message
Send Cancel

The matter arose in March this year when a civil society group, Centre for Health Human Rights and Development together with three individuals; Prof Ben Twinomugisha, a lecturer at Makerere University, Ms Rodah Kukkiriza and Mr Valente Inziku dragged the Attorney General to the Court.

Clad in black T-shirts with words: ‘Not another needless death: Government stop the deaths of mothers now!’, the activists converged at the court premises at 8am and remained devoted throughout their stay.

The group accuse government of, among others, for failing to provide basic indispensable maternal facilities in government health services leading to high maternal deaths.
They further claim to be affected by the imprudent and unethical behaviour of health workers towards expectant mothers, an act, they say, is inconsistent with the Constitution.
At least 16 expectant mothers die each day during child birth or soon.

However, the State was not represented at the case which upset lawyers of the petitioners led by Mr David Kabanda. But this did not deter Court registrar, Erias Kisawuzi from moving to hear Mr Kabanda’s conference notes after which, he gave him an audience.
The registrar advised the lawyers to put their petition in order by June 7 and thereafter see if they could fix the matter for hearing citing a backlog of cases and judgments the justices have to attend to next month.

The petitioners want court to compel government to compensate families of mothers who have died due to negligence of health workers and none provision of basic maternal health care packages and be compensated because of rights violation.

However, the government in its defence suggests that the disciplinary committees of nurses and mid wives council and the medical and dental practitioners should address the issue involving unethical behaviours among medical workers.

The government also claims the petition is speculative, discloses no question for constitutional interpretation, lacks merit and that it should be dismissed with costs.
According to the trends in maternal mortality between 1990-2008, the leading causes of maternal deaths include, massive shortage of trained professional health workers to attend births and lack of access to emergency obstetric care.
Posted by williamkituuka.com at 5:23 AM