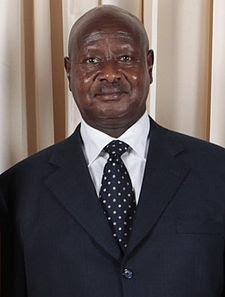 President Museveni due to be swear on 12th May 2011 for what would be the 6th Presidential term given that terms in office are 5 years in Uganda.

The framers of the Uganda 1995 Constitution borrowed much from the United States Constitution to the extent that the country should not have a Prime Minister which is President Museveni's creation; but also the time from the declaration of a winner in the Presidential elections is a time-lag not less then 2 months as is the case of America. What has happened in the time prior to the swearing of President Museveni is an eye opener such that this time should be made as short as possible if possible two weeks. A sitting government can completely disorganize the country in that given the frustration of leaving power, the country's reserves are likely to be the 1st victim. If the time lag among other things is to allow the outgoing leader time to finalise affairs, and allow the incoming leader to make any administrative changes. They have to choose a cabinet, they will have a new team...there's a lot of work involved in the transition, there is need to have a review so that the leader who is moving out stays for as short as possible. The in-coming leader has really good time during the campaign time to make the line up for those he wants to work with.
William Kituuka Kiwanuka