SSEMPALA OF WORLD BANK IS AN OG OF NAMUTAMBA DEM SCHOOL 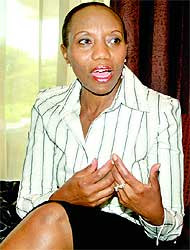 Ssempala heads the international affairs in external affairs section of the World Bank
20 YEARS OF DIPLOMATIC WORK, SSEMPALA TAKES ON WORLD BANK
By Arthur Baguma
WITH hands on her hips and the elbows standing out, she leans forward. She pays attention to every detail in her surrounding as she occasionally waves back to passers-by.
She speaks with confidence, illustrating her points with gestures. Dressed in a simple black skirt, a white striped shirt and matching black shoes, she exudes an air of diplomacy.
She looks like a 20-year-old. She laughs when I ask her about the contrast between her age and physical appearance; she jokingly shrugs off the issue with a smile.
“Women don’t state their age,” she says and admits, this is a question that often comes up when she meets people. She laughs again, sighs, looks at her ring before hesitantly saying: “I have peace and fulfillment in my life. I live my life one day at a time.”
Edith Grace Ssempala is the new director of international affairs, in the external affairs vice-presidency of the World Bank. Ssempala has a wealth of experience in diplomacy stretching over 21 years. She has served as Uganda’s top diplomat in different regions of the world.
“I didn’t expect to get the job,” she reveals, in a thoughtful posture. “I have worked hard for all my achievements.”
Ssempala’s new calling is a blessing to the Ugandan woman? One would wonder how a poor Ugandan in a typical rural village can benefit from an up class career woman sitting in Washington. However, Ssempala elaborately states that her new job is about helping the poor of the poorest.
She argues that the basic source of funding for developing countries like Uganda which benefits from the International Development Agency is the World Bank. Ssempala says once this funding is increased, poor countries like Uganda will benefit more. The World Bank funding also includes the International Finance Cooperation, which finances the private sector comprising mainly small-scale businesses which are the majority in Uganda.
“My work will have an impact on ordinary Ugandan women. We have almost doubled financing to agriculture where most Ugandans, especially women derive their livelihood,” Ssempala says. She says studies have shown that agriculture has three times the potential to reduce poverty than any other sector.
It has not been a rosy rise to the top in a world where the male ego and stereo types rule. “Every challenge is an opportunity. I have not looked at myself in terms of being disadvantaged as a woman. All one has to do regardless of their gender is working hard, be focused, committed and love what you do,” she says.
Ssempala has a passion to serve others. Her hands-on skills in diplomacy manifest in her career spanning over 20 years. She occasionally cites several sayings that have helped her through the rough journey of her career.
For instance she explains that you may not determine what happens to you in life, but you can determine how you react to it. And that is what makes the difference, because in life, what you may see as a huge challenge, another person sees as a challenge that strengthens you.
Born in 1953, Ssempala was raised in a village setting in Namutamba village, Mubende district. She comes from a family of seven. She went to Namutamba Demonstration School for her primary education, Gayaza High School for O’ level and Nabumali High School for A’ level.
Ssempala attained a degree in civil engineering from Lumumba University in Moscow, Russia in 1978. After graduating, she took up a job with an electronic company in Sweden. When a calling came for volunteers to liberate Uganda, she offered her services.
Ssempala did external work for the liberation struggle which ushered in the Movement Government in 1986. After the war, she was appointed ambassador to the Nordic countries (Denmark, Finland, Iceland, Norway, and Sweden). She served in this portfolio for a decade.
Later, she was appointed Uganda’s ambassador to the US where she served for nine years.
Ssempala’s most recent position was as the Ugandan permanent representative to the African Union and the United Nation’s Economic Commission for Africa, as well as ambassador to Ethiopia and Djibouti.
Ssempala says she had never nurtured a dream of becoming a diplomat although she has a passion for politics and all her role models are politicians. They include President Yoweri Museveni and internal affairs minister Dr. Ruhakana Rugunda.
Ssempala has a long history of being a performer wherever she has served. “She represented Uganda well. And I am a firm believer in her style of work. She will definitely deliver,” says a retired diplomat who worked with her.
When she speaks, Ssempala portrays a wide vision not only for Uganda, but Africa. She argues that what Africa lacks is aid that can put countries on their own feet — and that is aid to the private sector. She says aid should be a facilitator not an end.
In her position, Ssempala is responsible for international affairs functions, managing North America, civil society, speaker’s bureau teams in Washington, offices in Europe and the United Nations liaison offices in New York and Geneva.
Her turning point was when she committed her life to Jesus in 2000. She loves reading, especially Christian books. She also spends her time with her three daughters whom she describes as the best thing that has happened to her.
Posted by williamkituuka.com at 12:42 AM