WHY I CANNOT SUPPORT THE WALK TO WORK 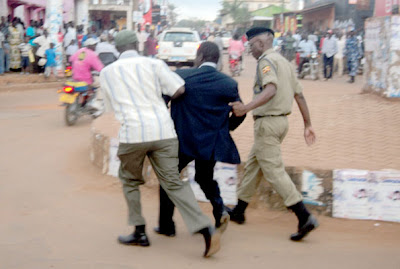 Victim of walk to work
The major reason I cannot support the walk to work campaign is that overtime I have observed President Museveni's Government machinery,and this will do anything possible whether reasonable or unreasonable to see Museveni unmoved, in the process a campaign like walk to work which is better interpreted as an attempt to see Museveni out of power is suicidal. We for example are aware of innocent people who were with Dr Besigye when he was mishandled,these people must have been working on Besigye's instructions,but who cares about them? The innocent victims of the riots many of whom are still nursing their wounds and scores of others dead,yet Kiiza Besigye receives coverage daily and he promises to continue where he stopped. As far as I am concerned from the time the opposition failed to get one Presidential candidate to contest against Museveni I don't take them serious. We have to do business but now one is not sure of what is to happen next simply because the opposition is full of gamblers. We are now hearing about people being arrested countrywide on allegation of their being involved inriots and who knows whether some are just being victimized?
William Kituuka Kiwanuka

In Uganda, over the last week, opposition political leaders organized Walk-to-Work days in order to protest the rise of fuel and food prices. Citizens were urged to do just that – walk through Kampala rather than drive or take public transportation. In the process, many, including Kizza Bisegye and Norbert Mao, have been arrested, with Bisegye suffering from a gunshot wound to his hand.
Following Mao’s arrest in Kampala, he was released and returned to the north, where many of his supporters are located. Another protest was quickly organized, this time in Gulu, to express frustrations over fuel prices and Mao’s arrest. As a result, Mao was arrested a second time, and the citizens of Gulu began to riot, resulting in the deaths of three people with others injured.
The Invisible Children staff and beneficiaries are all safe and we are continuing our work. Thanks to all of you who have expressed concern for our safety and for the people of Uganda.
We’ll continue keep you posted. 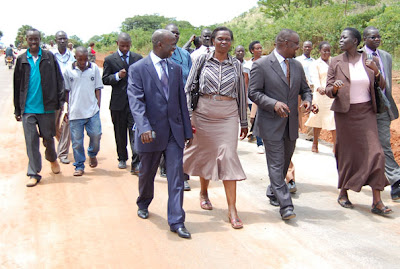 Opposition politicians walk to Nakasongola Prison to visit DP leader Norbert Mao before he was freed on bail. FILE PHOTO
By Gerald Bareebe

Opposition leaders yesterday said they will today continue with the Walk-to-Work protests over the spiraling cost of living in Uganda.
Mr Matthias Mpuuga, the national coordinator of Activists for Change (A4C), said, “definitely we shall walk tomorrow (today)”.
“Our initial plan was to donate blood but Red Cross informed us that they have enough blood to take them for a month. We have decided to walk today and donate blood at the end of the month to help victims of police brutality,” he said.
The walk-to-work campaign, organised by A4C, has been marked by violent clashes between protesters and the police since they began on April 11. Several opposition politicians, including FDC leader Kizza Besigye and DP president Norbert Mao have been arrested over the protests.
Dr Besigye, whose brutal capture sparked off deadly riots last Friday which claimed the lives of five people, is currently undergoing treatment in Nairobi Hospital for injuries sustained in the attack on him by security agents.

“We shall walk tomorrow as usual,” Ms Musumba said, adding, “Our only hope is that this brutal police force allows Ugandans the space to exercise their rights.”

The opposition campaign was yesterday boosted by the arrival of former Army Commander Maj. Gen. Mugisha Muntu, who has been out of the country for the last three weeks.

However, it was not clear if Maj. Gen. Muntu will take part in today’s protests, though he spent most of yesterday in a series of meetings with FDC officials.

Ms Musumba said; “We are just from a meeting and all of us will walk. We are not operating under FDC. We are now all members of Activists for Change.”

In an Interview with Sunday Monitor last week, Maj. Gen Muntu asked members of the civil society and those within the NRM party to join hands with the opposition to ensure that political reforms take place in Uganda.
“I am not surprised by the violence of the Museveni regime because they are operating out of fear. My suspicion is that the situation will get worse before it gets better,” Maj. Gen. Muntu said.
“However, all of us as leaders – not only in the opposition parties but also in the civil society and even those in the NRM who want to see reforms carried out for the good of the country – need to be psychologically prepared for the long haul. Freedom and democracy are not issues that we can negotiate. They are our right and we must continue to struggle to achieve them.”
Mr Mpuuga said he has been informed that Mr Mao will join today’s protest. “Most of our leaders will walk today,” Mr Mpuuga said.
“I have been told that Mao will walk and all other DP leaders and [Makindye West MP - Jeema] Hussein Kyanjo called me to confirm that he is walking tomorrow. Walking is voluntary.”

NAMASUBA BOY WHO DID NOT SURVIVE RIOTS

How trigger-happy cop got away with murder
After driving along a dirt road with several patches of mud formed from the previous night’s downpour, we arrive at a small house with a rusty iron roof, hardly five metres from one of the several roads that criss-cross Ndejje in Namasuba, on the outskirts of Kampala.

In front of the house is a Dyna truck, with people off-loading property. Noticeable are two medium-size beds, a small clay pot and a heap of clothes.

“That was his property, and this one here is one of the brothers; and that one over there too,” our contact, Bosco Kibuuka, points out.

Augustine Guwa, 22, a boda boda operator, died, according to a post-mortem report from Mulago hospital, of overbleeding after a bullet shot through his back was lodged in his heart. Hours earlier, Guwa had bumped into his father, Kizito Mayanja Segirinya, who was walking back to his home. Segirinya, dark-skinned man of medium height, with sprouts of grey hair in the middle of his scalp and looking every inch older than his age, had asked his son, the second of three, to be safe because the situation was dangerous.

This followed protests in Kampala and a few other towns at the brutal manner in which FDC leader, Dr Kizza Besigye, had been arrested on April 28. The government says eight people lost their lives, while more than 300 were injured. But, like Guwa’s, many deaths could have gone unreported.

While Segirinya continued on his way home, his son parked his motorcycle at his elder brother’s house. Not long after, as Segirinya was in his house, a couple of metres down the hill towards Entebbe road, he received news that broke his heart.

“While inside my house, one of my neighbours walked to me and said, ‘I know what I am going to tell you isn’t good news, but your son has been shot dead’,” Segirinya narrates.

He said he gathered himself up and walked back to where he had just been. He was led to a one-roomed house where his son’s body lay – a son he had only spoken to a few minutes earlier and advised to take care. After locking up his motorcycle, the source of his livelihood, at his brother’s house, Guwa was hanging around his neighbourhood as security officers combed the area. Along Entebbe road nearby, residents were protesting against Besigye’s brutal arrest the previous day.

According to the late Guwa’s youngest brother, there were running battles between the police and the rioters.

“The police chased them to one end. Bullets were flying all over the place,” he said, standing at the same spot he had as he witnessed his brother run past, for the last time, to meet his death.

One of Guwa’s friends said he saw a policeman fire shots into the ground. It is one of those shots that hit a toddler, less than two years old, in the back. That is the toddler who was shown on TV being rushed to Mulago hospital’s casualty ward by a Red Cross staff, with its wailing mother in hot pursuit.

Another eyewitness, who identified himself as Kadumbuli, and a close friend to the late Guwa, described what he saw.

“I was with Guwa over there (pointing in the direction) when we bumped into two policemen, one dressed in a khaki uniform and another in their blue camouflage. The one in khaki ordered his colleague to shoot at us, but the colleague refused.

“We then took off in different directions but unfortunately for Guwa, he ran straight into Arthur Taremwa, who all the while was standing by in front of a gate. He pulled out his gun and pointed it at Guwa, who then made a u-turn.

Taremwa then fired at him through the right side of his back. He struggled to walk towards a wall, but collapsed after a few metres. I took off,” said Kadumbuli, a rugged taxi tout on Entebbe road.

Described as lanky and of light complexion, residents of this village insist that they know Taremwa as an operative of the Rapid Response Unit (RRU). This police outfit, to which Gilbert Arinaitwe also belongs, has often been accused of torture.

With the smoking gun safely tucked away, Taremwa, witnesses said, disappeared into the crowd. A woman in a nearby house who witnessed the shooting screamed, attracting other people who quickly picked up the bleeding Guwa and rushed him to his brother’s house, where he breathed his last.

“We later returned the body to the dirt road for everyone to see what these people had done. It is then that the ambulance arrived,” said one of Guwa’s friends.

Taremwa was reportedly present, among the crowd, when Guwa’s bloodied body was bundled into the ambulance, but later grew uneasy when people singled him out as the shooter.

“He pulled out two pistols and fired indiscriminately, but fortunately, no one was hurt. He was then taken away by his colleagues,” said one resident.

On Sunday, Guwa’s body was laid to rest in Nzwanyi, Wakiso district, as the man alleged to have senselessly ended his life moved houses, to another area. Vincent Okurut, the Katwe police station CID head, was guarded when contacted for a comment.

“We are trying to reconstruct the evidence of how this person was killed,” he said. He denied knowledge of the alleged killer, Taremwa, adding that no arrests have been made so far.

“We are investigating, and I cannot divulge any more information.”

For now, Guwa’s young family, consisting of a three-month-old baby and her mother, have to look elsewhere for a livelihood.

hbogere@observer.ugThis e-mail address is being protected from spambots. You need JavaScript enabled to view it
Posted by williamkituuka.com at 11:30 PM