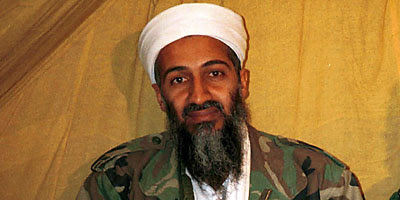 Barack Obama AP – President Barack Obama reads his statement to photographers after making a televised statement on the …
By JULIE PACE and MATT APUZZO, Associated Press Julie Pace And Matt Apuzzo, Associated Press – 1 min ago
WASHINGTON – Osama bin Laden, the glowering mastermind behind the Sept. 11, 2001, terror attacks that killed thousands of Americans, was slain in his luxury hideout in Pakistan early Monday in a firefight with U.S. forces, ending a manhunt that spanned a frustrating decade.

"Justice has been done," President Barack Obama said in a dramatic announcement at the White House.
A jubilant crowd of thousands gathered outside the White House as word spread of bin Laden's death. Hundreds more sang and waved American flags at Ground Zero in New York — where the twin towers that once stood as symbols of American economic power were brought down by bin Laden's hijackers 10 years ago.
Another hijacked plane slammed into the Pentagon on that cloudless day, and a fourth was commandeered by passengers who forced it to the ground — at cost of their own lives — before it could reach its intended target in Washington.
The United States attacked Afghanistan within months, pursuing al-Qaida, and an invasion of Iraq followed as part of the Bush administration's global war on terror.
U.S. officials said the CIA tracked bin Laden to his location, then elite troops from Navy SEAL Team Six, a top military counter-terrorism unit, flew to the hideout in four helicopters. Bin Laden was shot in the head in an ensuing firefight, these officials said, adding that he and his guards had resisted his attackers. U.S. personnel identified him by facial recognition, the official said, declining to say whether DNA analysis had also been used.
The U.S. team took custody of bin Laden's remains, which American officials said were being handled in accordance with Islamic tradition. Obama said no Americans were harmed in the operation.
Three adult males were also killed in the raid, including one of bin Laden's sons, whom officials did not name. One of bin Laden's sons, Hamza, is a senior member of al-Qaida. U.S. officials also said one woman was killed when she was used as a shield by a male combatant, and two other women were injured. 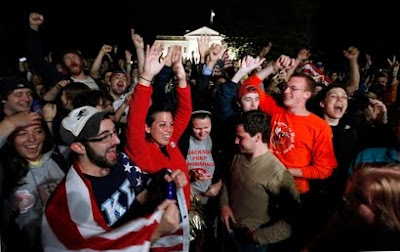