MONITOR, THANKS FOR EXPOSING THE DIRT IN UGANDA POLITICS 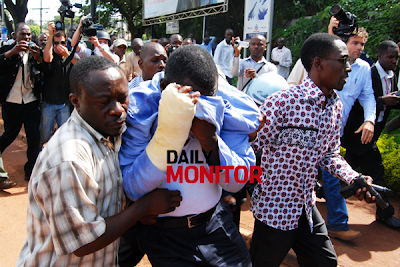 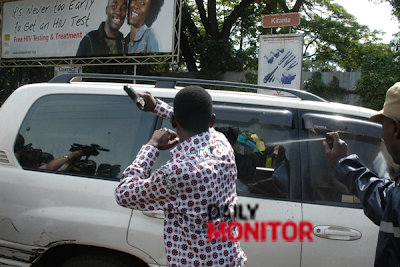 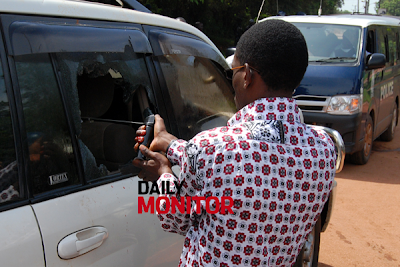 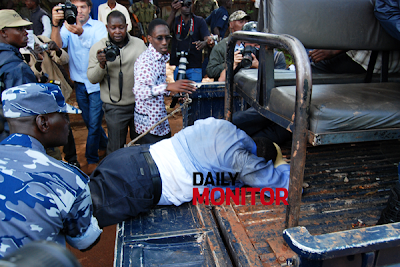 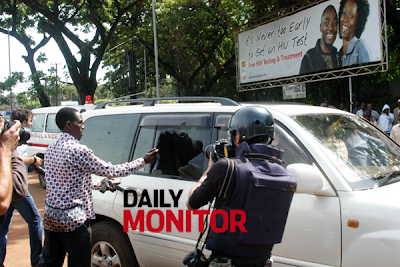 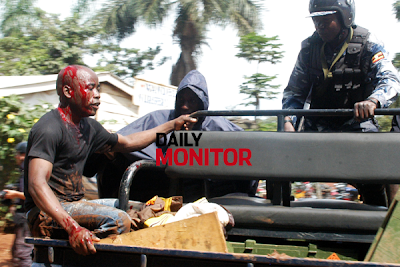 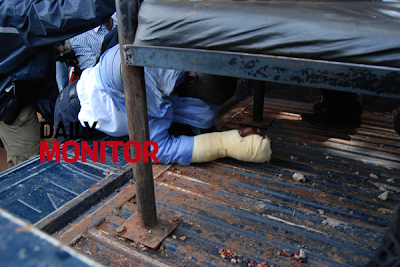 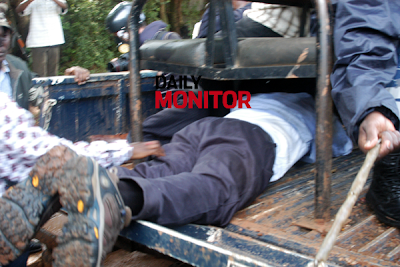 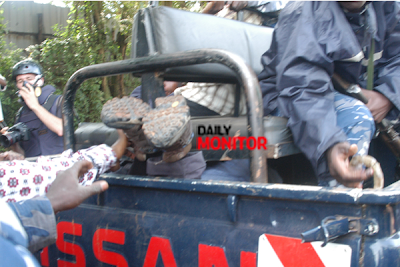 HOUSE SPLIT OVER THE HAMMER 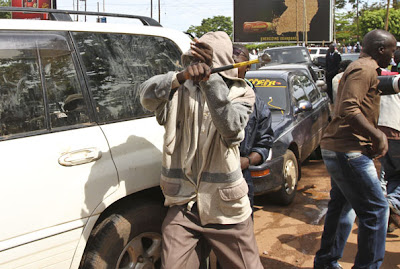 A hooded man smashes Besigye’s car windscreen with a hammer.
By Monitor team
Posted Thursday, May 5 2011 at 00:00

One of the clips had been presented by government through the junior Minister of Internal Affairs, Mr Matia Kasaija, while the second was presented by FDC secretary general Alice Alaso to counter the first show.
In the clip from government, apparently patched together from footage of different events, Dr Besigye was shown holding a hammer and threatening to hit the police.
While that from the opposition showed a hooded police operative running away from Dr Besigye’s car and the opposition politician telling journalists that the hammer the man was wielding had just fallen in the car.
Opposition MPs said the clip brought by the minister of internal affairs was doctored to portray the FDC leader as having used pepper spray and a hammer to hit the police. This angered the opposition who called for honesty rather than posturing.
“This is mere acting. Everyone knows what happened but they brought the cut-and-paste videos. We can’t accept this,” Mr Abdu Katuntu (FDC, Bugweri) said.
First Lady and Ruhaama MP Janet Kataha Museveni blamed Dr Besigye, the victim of the vicious police. “If he had any [leadership capabilities], he should have accepted police orders,” she said.
“It is unfortunate for a leader like Dr Besigye to show the kind of behaviour he has been showing day after day,” Ms Museveni said.
“More unfortunate for members of the opposition to try to defend him.”
Her statements prompted some MPs to ask her where she had left her “Godly self.”
“Hon Janet should stop pretending here that she is saved when she is blaming the victim. I have seen functions where Janet [Museveni] attends and people close their eyes and pray,” Aruu County MP Odonga Otto, said.
He added: “We expected her to give a motherly statement, and pray for the country but not to blame the victims.”
Budadiri West MP, Nandala Mafabi said he “thought Hon. Museveni was saved but I am surprised that she comes here to tell lies.”
And while others called this newspaper “heroic” for exposing the truth in pictures, Minister of State for Animal Husbandry, Maj. Bright Rwamirama, who said he was angered and dismayed by the way his long-ime friend had been arrested, accused Daily Monitor running fabricated photos of an alleged state operative hitting Besigye’s car windscreen before losing the hammer.
“This picture which appeared in the Monitor should be investigated. I do not see a possibility of a hammer hitting a car windscreen three times and it fails to break unless it is a bullet proof car,” he said.
He insisted it was Besigye who came with the hammer.

Arinaitwe innocent?
He also said no blame should be put on police officer Gilbert Arinaitwe who smashed Dr Besigye’s car windscreen with the butt of his pistol before spraying him with pepper spray saying he was acting according to the law.
Before MP David Bahati [NRM, Ndorwa] moved a motion to investigate the incidences of excessive use of force by police and state agents, acting leader of the opposition in Parliament Kassiano Wadri asked government to replace the FDC leader’s car.
He called for the resignation of the minister of internal affairs together with the Inspector General of Police, saying they over-stepped their mandate and are no longer fit to serve the government.
Prime Minister Apolo Nsibambi called for dialogue among the leaders.
“We should restrain ourselves so that we enjoy political sobriety. The opposition should bring proposals so that we see if we can adopt them,” he said.
Speaker Edward Ssekandi moved the final debate and resolution on Mr Bahati’s motion to today morning.
Reported by Isaac Imaka, Sheila Naturinda & Mercy Nalugo
Posted by williamkituuka.com at 11:52 PM