THE TRIALS OF AN OPPOSITION LEADER IN A FAKE DEMOCRACY

It may be true that some of the moves of Dr. Kiiza Besigye are not the best, however, the excesses of the state are a matter of concern to all peace loving Ugandans. When leaders in republics like Uganda make mistakes, they assume that people who are led would just worship them which is absolutely wrong. Many of us are focused on the best way to run state matters, not like a jungle way of doing things.
William Kituuka Kiwanuka 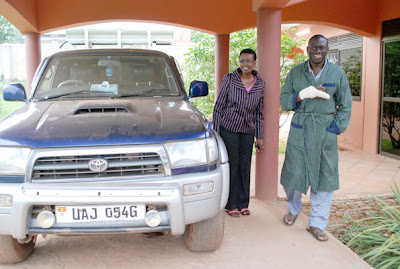 Opposition leader Dr. Kizza Besigye with his wife Winnie Byanyima at their home, moments after Ms Byanyima was briefly detained at Kasangati Police Station. Photo by Isaac Kasamani.
By Paul Amoru & Isaac Kasamani
Posted Monday, May 16 2011 at 09:30
Ms Winnie Byanyima, the wife to opposition leader Dr. Kizza Besigye was on Monday morning besieged in her car right outside their family gate at about 6:30 am and towed by a police truck to Kasangati police station, about 20 kilometers from the Kampala.

The police believed the opposition leader was in the car.

Ms Byanyima however was with Dr. Besigye’s driver and two aides heading to Entebbe International Airport, to catch a 9:00am British Airways flight to New York, where she works as director for gender in the Bureau for Development Policy at the UNDP.
Ms Byanyima says she is outraged by the incident and will instruct her lawyers to take on the Police Chief Maj. Gen. Kale Kayihura and also demand a formal apology.
She said their family home is now under siege by the police and other security operatives. “I am absolutely furious at this incident, and it seems my husband is now a hostage… they (police) have besieged my home,” Ms Byanyima said in an interview with Daily Monitor, moments after she was released from the brief detention.
Ms Byanyima has now returned home and says she is making arrangement for the next available flight. Meanwhile, Dr. Besigye is held up at his home with heavy police presence at his gate.
Besigye said in an interview with this Newspaper that he has flu and would not be walking to work on Monday Morning. “My wife was travelling back to New York, I don’t know what is going on, but I intend to go to a clinic,” the opposition leader said.
It is not clear whether police will allow him to visit the clinic. The development comes after Uganda’s President Yoweri Kaguta Museveni was sworn in last Thursday for the Fourth term after winning the February 18 elections with 68 percent but the ceremony was overshadowed by the arrival of his arch rival and three time challenger Dr. Besigye who had been flown to Nairobi for medical treatment from injuries sustained during a violent arrest last month.
The swearing-in ceremony was graced by a few African presidents, from Somalia, Ethiopia, Kenya, Zimbabwe, Tanzania, Democratic Republic of Congo, South Sudan and Nigeria. 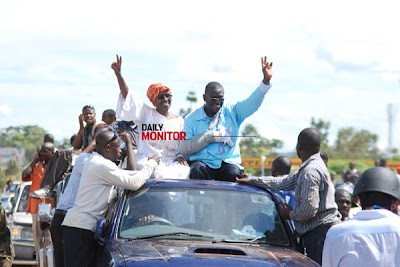 Dr. Besigye was almost stopped from coming back to the country the day before the swearing-in ceremony.
Blocked from boarding a Kenya Airways flight after reports that the Uganda government would not allow the airline to land if he was on board, Besigye was later offered a seat on another evening flight which he declined.
Together with his wife and former confidante Together with his wife and former confidante Museveni Winnie Byanyima, they chose to come back on the very day of the swearing in ceremony.
The army used tear gas and canes to try to disperse crowds gathered along Entebbe Road as they waited for Besigye. The military had to make way for foreign dignitaries to be able to access the road to the airport as a journey that usually takes about an hour, took Besigye and his crowd of supporters over six hours to make it to the city.
Ugandahas faced a stalemate after Activists for Change (A4C), a new pressure group behind the walk-to-work campaign to protest the high fuel and commodity prices. Government however outlawed the walk and police has been violently handling the protesters, and in the process, about 10 people have been killed in the police shootout.
Posted by williamkituuka.com at 2:23 AM