IT WAS WRONG FOR BLOOD BANK TO PUT OFF DONORS

The boss of Uganda Blood bank may have acted on powers from above which is the reason many professionals fail to operate meaningfully in Uganda. It is clear that the Blood Bank needs blood, but to tell Ugandans that the Blood Bank has enough blood to get through the month was unfortunate.
It is clear, the powers from above on a day to day basis interfere so much with the logical decision making of professional executives; the reason why many well qualified persons ignore jobs advertised and instead they keep to their own business. The Blood bank Boss would instead have welcomed the blood donation and agreed on a workable time table, then the group would go ahead and mobilize donors, and blood would be got.
William Kituuka Kiwanuka 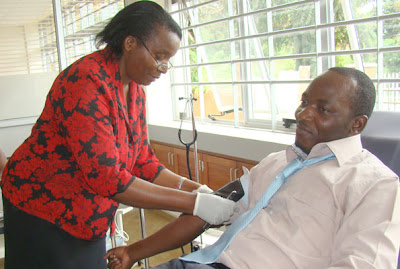 * In April 2010, Dr Kyeyune raised an alarm that hospitals will face blood shortage if people do not donate more blood.
* On December 8, 2010, the Uganda Blood Transfusion Services said Nakasero Blood Bank alone needs 5,000 units of blood to sustain it yet the holiday is long. School children contribute up to 90 per cent of blood collected.
The Director of the Uganda Blood Transfusion Service has said the institution has enough blood in its bank, dismissing claims by Activists for Change (A4C), a pressure group that is behind the walk-to-work campaign, that the country was facing severe blood shortage.
In a media briefing organised by the police at the Uganda Blood Transfusion Service offices at Nakasero, Dr Dorothy Kyeyune-Byabazaire, distanced herself from a planned blood donation campaign being organised by A4C in Kampala.
“We want to disassociate with A4C because we have no programme with them to collect blood. I want to assure the public that we have enough stocks of blood in our blood banks for any emergency that may arise,” Dr Kyeyune said.
This is first time the organisation, which is under the Ministry of Health, has claimed to have enough blood stocks in the last 10 years. On Tuesday, the national coordinator of A4C, Mr Mathias Mpuuga, called for a blood donation drive to help hospitalised victims of the recent protests. A dozen people have been killed and more than 200 injured following a violent government crackdown on walk-to-work protesters that started three weeks ago.
Dr Kyeyune disclosed that the Ministry of Health Permanent Secretary, Mr Asuman Lukwago, and the Inspector General of Police, Maj. Gen. Kale Kayihura, called her that they were concerned about A4C’s blood donation drive in Kampala.
However, UBTS website shows that May is a month they carry out blood donation drive nationwide. During this month, UBTS cannot meet its blood targets because students, who constitute at least 90 per cent of the donors, are on holiday.
But the director says they currently have 10,000 units of blood and only need 6,000 units to meet this month’s target. She said annually they need 200,000 units but Daily Monitor has established from the UBTS web site that the said units are way below World Health Organisation (WHO) standards.
According to the WHO standards, a country is supposed to collect blood units equivalent to 1 per cent of the total population if all the transfusion needs are to be met. As of 2010 Uganda requires about 300,000 units of blood which is projected to increase by 10 per cent annually.
Uganda has about 31 million, meaning 25,000 units of blood per month are needed.
Dr Kyeyune asked Mr Mpuuga to write to them formally, which he accepted to do.
Posted by williamkituuka.com at 11:34 PM