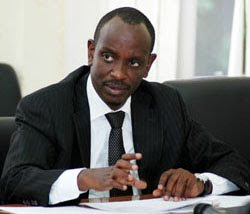 The new Secretary General of the East African Community has come a long way quickly, and his journey of course will be familiar with any Rwandan who ever grew up in exile.
Sezibera

Not that there was doubt from the beginning that the soft-spoken Rwandan refugee kid would go places despite the fact his schooling started in appalling conditions in camps for displaced Rwandans in Burundi.

Richard Sezibera was diligent in his studies; he always seemed to be at the top of his class; he was good with numbers and with language and he aced his year’s Primary Leaving Exam when he sat it at the Namutamba Demonstration School; he passed so outstandingly he was admitted to what is generally considered one of the best secondary schools in Uganda – St. Mary’s College, Kisubi. Not many kids who suffered the double whammy of losing a father before they were born – his father was a victim of Parmehutu pogroms in Gikongoro – and growing up in conditions of severe material deprivation would hope to finish primary school, leave alone go to an elite secondary school where a place is almost as rare as chicken teeth.

When we sit down with Minister of Health Sezibera at his offices in Muhima you can hardly tell this is the man who just got confirmed to the EAC’s most powerful job by the region’s heads of state.

From outward appearances, he exhibits the same level of excitement about it as you would if someone invited you out to lunch. Nothing seems out of the ordinary. Not that one would be expecting a dignitary to be gushing on about what a great gig they have gotten. With Sezibera however there isn’t even the faint air of gravity some men would affect if they got elected mayor of a district; there is not the slightest hint of self-awareness here that the man will be participating in policies and making decisions affecting the affairs of over 120 million people. He just looks at me politely, in his dark, plain suit and waits for the questions to begin, answering them in measured, careful terms.

To look at Sezibera is to be reminded one more time of how often people serving in the Rwandan administration seem to be so underage relative to the posts they hold. Here is a health minister who is just a few weeks short of his forty seventh birthday – he was born on 05 June 1964 – who also is the best candidate Rwanda could nominate for secretary general of the EAC! In terms of the years in experience it would require in another country for one to even be named permanent secretary of the ministry of health, the man is a baby! Like him, most Rwandans with senior posts have been compelled to grow into their jobs, but few of them as much as he.

One remarkable thing is that Sezibera seems to work hard to dispel impressions you may have that he has been named SG of the EAC due to any individual brilliance on his part, or competence, or even as recognition for the deftness with which he led the team that negotiated Rwanda’s accession to the EAC. That was in the early 2000s and the negotiations – the ‘Sezibera Team’ was composed of about a dozen high-ranking members of Rwandan institutions among them the RRA, the Ministry of Commerce, the Private Sector Federation and others – were “often difficult and exhausting”. The team represented a country that was culturally different from the ‘traditional three EAC countries’ in so many ways, and one where the region’s lingua franca, English had only recently been introduced. Convincing the ‘traditional three’ would take all the negotiating skills and soft persuasive powers of a consummate diplomat, and Sezibera was just the man. (In fact Burundi would do well to send him and his team a thank you note – if it hasn’t done so – because it was the ground work they did that principally made it possible for the relative ease with which Rwanda’s twin to the south too acceded to the EAC).

Sezibera prefers instead to give much of the credit for his success to his boss (at least until very recently), President Paul Kagame. “I am grateful to H.E. the President for the many opportunities he has given me to serve my country, and it is no different even with the chance to serve as SG of the EAC,” he says.

He, it is easy to see, is only being modest and properly differential to the President. There are other Rwandans who would be in a position to do the jobs Sezibera has been entrusted with down the years. But one thing you can be sure of is that they are not many at all.

In 1990, the year the RPF launched the war of liberation, the young Sezibera – only 26 at the time – was made one of a very few field medical officers for the struggle that lasted four years. He was barely over a year out of medical school at Kampala’s Makerere University after doing his entire six years of secondary school education at Kisubi. He joined the struggle when he promptly abandoning his duties at Mbale Hospital in the east of Uganda and by the time the war and the Genocide were over the young man was entrusted with the duties of physician cum personal assistant to the new president, Pasteur Bizimungu.

“Those were absolutely challenging times,” Sezibera says. “You can’t imagine what it was like; the ministers did not have chairs to sit on! There was only one working phone line in the entire country and communication was mostly by military walkie talkies! There was no currency at all.” He pauses pensively then adds, “It is nothing short of miraculous to see what Rwanda has achieved only seventeen years on.”

He certainly has done his part in helping make those achievements possible, in the process going through almost the entire repertoire of duties possible to entrust one in a scarce field of competent, educated people. He was member of parliament from 95 to 99, after a short stint serving in Bizimungu’s office; he was ambassador of Rwanda to Washington DC from 99 to 2003; he was special envoy of President Kagame to the Great Lakes Region immediately afterwards, until his appointment in 2008 as health minister.

What does Sezibera envision for himself after his five-year term is up at the EAC? “I don’t like to think further ahead than what I have to do to properly do my job of the present!” says this family man who is father to four children.

“I focus on my job and don’t let other thoughts distract me. I hope to give it my best at the EAC and hope to do the same for anything I may get after that,” he says as we part and he exits the boardroom in which I have been interviewing him, through an adjoining door back to his office.
Posted by williamkituuka.com at 12:06 AM