THE GOVT. OF UGANDA NEEDS TO AVOID THE TEMPTATION ON BOTANIC GARDENS

It is normal for the Government of Uganda to keep re-allocating land use as is the case with the Museum. Our prayer is that that temptation is not extended to the Entebbe Botanic Gardens, a 40 hectare piece of land. There is all the hope that the Government will respect the Strategic Plan by NARO from 2009 to 2018. The Gardens are the only National Botanic Garden in Uganda. On establishment in 1898, the Botanic gardens were a reception centre for introduced crops such as Cocoa, Cotton, Coffee, Tea, Oil Palm, Sisal to mention a few. The land is a topography of wide range of micro habitats ranging from tropical rain forests, natural springs, sandy well drained soils, poorly drained marshy areas supporting the swampy vegetation as well as the shrubby areas typical of open savannah, with birds, monkeys, spiders to mention some.
William kituuka Kiwanuka

The garden is situated along the northern shores of Lake Victoria giving it an excellent view of the lake. There are 360 plant species of which 199 are indigenous to Uganda, 122 known for traditional medicinal value and 110 exotic plant species.
The Entebbe Botanical Gardens established in 1898 are situated on the northern shores of Lake Victoria virtually on the equator. Experiencing an annual rainfall of 1623 mm and at an altitude of 1134 metres the gardens are set in 40.7 hectres. 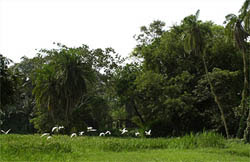 The gardens house a collection of species of plants of the tropical, sub-tropical and temperate zones, besides several shrubs and other plants regenerated naturally over the years.The collection as of 1998 numbered 309 species, 199 indigenous to Uganda, 122 with known medicinal value and 110 exotic. The gardens are a popular attraction for visitors of which some 40,000 per year are passing through the gates since the rehabilitation in 1998.
Posted by williamkituuka.com at 11:50 PM