Uganda's Parliament is simply a drain on the economy, you imagine a 375 strong Parliament for a least developed country like Uganda is unfortunate. Yet, what the executive wants just sails through because the NRM has numbers. Yes, the vicious circle of poverty will continue.
William Kituuka Kiwanuka 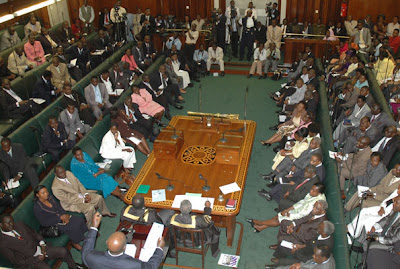 A week after they were sworn-in, MPs yesterday demanded that government extends a Shs50 million advance to each of them among other proposals for an upward review in pay and a removal of taxes on cars which they will buy under the already generous motor vehicle loan scheme.
To have their way, the lawmakers chased away journalists and stopped coverage of a plenary debate where they reportedly agreed to push for a pay raise in a move, according to sources, which is intended to shield them from rising cost of living biting other Ugandans.

Okupa’s proposal
In an unprecedented move, Speaker Rebecca Kadaga agreed with a proposal by Kasilo MP Elijah Okupa backed by Nakaseke Woman MP Rose Namayanja that all journalists be kicked out of the plenary.
All closed circuit television cameras which beam plenary sessions to offices inside the Parliamentary Building were also switched off and parliamentary police officers were asked to make sure that the confines of the Chambers were out of bounds.
The demand for an increase in pay is likely to renew debate over the bloated size of Parliament and whether MPs should be allowed to determine their salaries and allowances. In March, President Museveni questioned the logic of the constitutional provision allowing MPs to determine their own remuneration, a privilege that he said could be abused.
While Ms Kadaga later told journalists that this closed session of the House mainly discussed proposals on how to protect new MPs from conmen and manipulative money lending institutions, sources who attended yesterday’s sitting said.

Avoiding banks
“When it came to the welfare of the members, majority were of the view that Parliament gives us at least Shs50 million each as advances to sort out our needs instead of borrowing from banks.”
Other MPs told Daily Monitor that their colleagues demanded brand new vehicles instead of buying second-hand cars. “Other members want government to increase the car facilitation scheme to enable members gets new vehicles,” a source said, adding: “There was also a proposal to increase on the mileage (fuel), monthly emoluments and other allowances.
But Speaker told us that all these matters will be handled by the Parliamentary Commission.” The source added: “Well, some MPs in principle agreed that the salaries and allowances be increased owing to the rising cost of living but others suggested that we close debate on the subject so that we can raise it in other fora outside Parliament.
“We closed out you people (journalists) because sober legislators wondered how the public would perceive the fact that the new Parliament is the one discussing salary increments.”
According to sources, Iganga Municipality MP Peter Mugema and Kajara MP Stephen Tashobya, among others, proposed that the pay for legislators be increased to take care of the double-digit inflation which has officially surpassed 14 per cent according Uganda Bureau of Statistics figures.
However, other sources told Daily Monitor that there was also another proposal to increase the consolidated pay for a MP from Shs15 million to about Shs19 million.
If the yet-to-be constituted Parliamentary Commission endorses the proposal, taxpayers would fork out more than Shs7.1b every month to pay the 375 MPs in the House and Shs85.5b annually to facilitate lawmakers.
The proposal came a day after MPs passed a resolution to increase the number of Cabinet ministers from 21 to 29 and state ministers from 41 to 47 whose salary and that of the MPs would be shouldered by the already over-burdened tax payer.
Before Speaker Kadaga asked journalists to leave the chambers, Mr Okupa said: “We are discussing matters of housekeeping. We don’t need cameras. Let them be switched off. The members of the fourth estate of government (journalists) should also leave.”
According to sources, former Parliamentary Commissioner, Ms Justine Lumumba (Bugiri MP), reportedly supported the idea of raising emoluments.

New cars
While sources told Daily Monitor that the idea of increasing MPs salaries mainly came from new MPs, sources named Obongi County MP Hassan Fungaroo Kaps as one of those who demanded “brand new and powerful cars” and insisted that lawmakers should not get second-hand vehicles.
Lawmakers in the 8th Parliament received Shs35m each as part of the contributory Shs60 million car deal. Referring to the action of throwing out media, parliamentary spokesperson Helen Kawesa said: “The rules provide for a closed session. There were some pertinent issues members wanted to discuss and that’s why journalists were asked to leave.”
Kyadondo East MP Ibrahim Ssemuju walked out of Parliament shortly after journalists were asked to leave—protesting the Speaker’s decision on a matter of national significance.
“The Speaker said we were going to discuss the MPs welfare but I protested because I came to represent my people.”

Sole protestor
He added: “Our behaviour suggests that we are MPs for ourselves. Whatever issues come on the floor of Parliament must be discussed in the context of all Ugandans.”
But after Ms Kadaga moved out to allow her deputy, Mr Jacob Oulanyah, continue with the proceedings, she said: “We are not discussing increasing MPs salaries. I realised that a number of banks have been sending messages and offering loans to new MPs they must pay with interest.”
“We were cautioning members not to take such loans and watch out for conmen. They’re given the loans without security. Some MPs call me to get them out of prison and this time I am not ready to do this and that’s why we had to warn them.”
Posted by williamkituuka.com at 1:16 AM