25 YEARS IN POWER AND GOVERNMENT CAN STILL STOP INCREASE BACKED BY PRICE HIKES!

It is true that some schools make good money from fees, however, it is also true that when prices of virtually everything are hiked more so due to ill advised policies of the NRM Government where they saw the pumping of money into the economy as the viable way to win the hot elections. The order simply does not make sense. Even in the case of a person who has to make a living alone, it is becoming very difficult to make ends meet. Virtually everything has had a price increase. The question to ask is whether these head teachers or schools shop from a different market. If not, then the Government directive is simply ridiculous more so after so many years in power. What makes sense is to look to fiscal and monetary measures to deal with the solution. The Museveni Government has failed to see sense in stopping consumption related expenditure. The country will limp on until some other person will bail it from the unfortunate circumstances it is in.
The NRM Government would instead look at what is wrong in schools, for instance is the Ministry aware that there are some schools where a child with allegedly good points is not admitted simply because those schools are known to cheat in exams? What has UNEB done about teachers who cheat when asking for Examination fees and they end up taking parents for a ride? Why can't UNEB open Collection accounts countrywide so that the children/parents pay the official charges and at the same time eliminate the head teachers who cheat children money such that at examination time these children are not registered.
What has the Ministry of Education done about head teachers who deliberately don't allow their children to fill forms for Higher school so that when exam results are back these children have one option but to go back to the schools where they were for O'level. It is also true that some head teachers actually give students forms, which forms unfortunately are not submitted such that the children still find problems even when they got good passes.
Let the NRM Government manage Uganda professionally.
William Kituuka Kiwanuka
GOVERNMENT ORDERS SCHOOLS NOT TO INCREASE FEES! 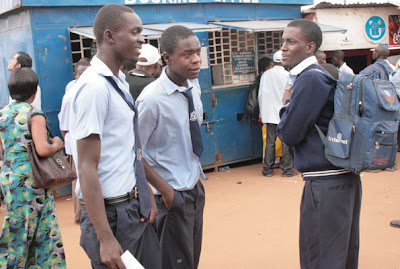 Students contemplate their next move after they broke off for first term holiday on Thursday. Some schools had increased fees for next term but govt has told them not to. PHOTO BY JOSEPH KIGGUNDU
By Anna Nafula
Posted Sunday, April 24 2011 at 00:00
The government has ordered schools that had increased fees for next term to first seek approval from the Ministry of Education. According to a mini-survey by Saturday Monitor yesterday, a number of school heads had sent out circulars to parents at the close of first term on Thursday indicating an increment in school fees for the second term.
Yesterday, the Information Minister, Ms Kabakumba Matsiko, said: “This increment has not been made with the approval of the Minister responsible for Education and Sports as provided for by law.”
Head teachers Saturday Monitor talked to cited the rise in food prices, higher utiltity bills and other supplies as the reason for the fees increment.
Most schools had increased their fees by at least Shs50,000.
Ms Kabakumba said the Education Act (2008) gives the Education ministry powers to approve schools fees and prohibit levying any charges for purposes of education in any primary or post-primary institution implementing Universal Primary Education or UPPET/Universal Secondary Education programmes.
The order applies to all government and private schools.
She added that contravention of this and other related provisions is equivalent to committing an offence and being liable on conviction to paying a fine not exceeding fifty currency points or imprisonment not exceeding 12 months or both.
“Even for the private schools, whose management committees or Boards of Governors are established in accordance with Second and Third schedules of this Act, fees payable by students is prescribed and approved by the minister,” she said.
“In the case of UPE and USE participating schools, including those private schools that have admitted USE beneficiary students under the Public Private Partnership (PPP) arrangement, which should all be Day Schools, increment of fees does not even arise since there are no costs associated with accommodation or feeding of students.”
She explained that government was particularly paying a little higher for students enrolled under the PPP arrangement to take care of the additional costs incurred by these schools.
The government pays each school Shs41,000 per child per term in schools implementing programmes while Shs47,000 is given for each child attending a USE partner private school.
In 1994, a government-instituted committee realised that school fees were increasing due to the high cost of education that put so many children out of school and recommended a new fees structure that would impose a ceiling on school dues.
Posted by williamkituuka.com at 11:02 PM