IN MEMORY OF THE LATE J C KIWANUKA 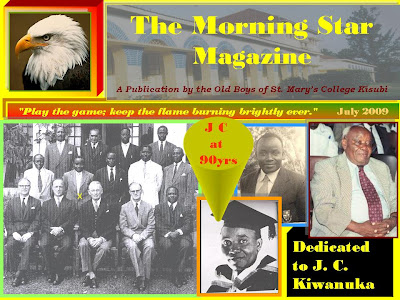 On June 12, 2010, God called to himself the only J C Kiwanuka our great teacher and more so, Professor of Mathematics. We thank God because Kiwanuka was not corrupt, he lived by example and he lived a worthy life. In 2009, we decided with Dr. Kkolokolo to write a Magazine to mark 90 years of our great teacher. On June 12, 2011, it will be one long year without J. C! Below I reproduce what Dr. Kkolokolo wrote about the great J C Kiwanuka.
May his soul rest in eternal peace
William Kituuka Kiwanuka
Lourdel House

The article below was written when the Late J C Kiwanuka turned 90 in 2009.
EAST AFRICA’S LEGENDARY MATHEMATICIAN CLOCKS NINETY! 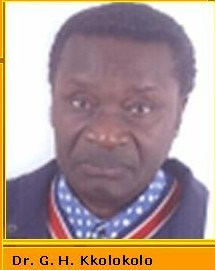 He is a living legend who commands love and respect from all layers of our national life, he is a larger-than-life savant and sage, he is a prescient primer whose multitudes of initiatives have always made him a multivalent schemer of an opulent high quality achievements. He is a person whose near magnetic effect could always make the ground quake! This is the very much celebrated Prof John Chrysostom Kiwanuka, a real national hero who by all accounts was East Africa’s first black Mathematics graduate and first graduate teacher, and the best in the field. He has now turned 90.
This down to earth guru has to his credit an infinite number of successes and super high achievements in all areas ranging from academics / education to politics, religion, syndicalism, social welfare and so on..
A very humble exemplary Christian, Prof J. C. Kiwanuka has succeeded to walk majestically in the footsteps of his super legendary namesakes, the saintly and scholarly Archbishop Dr Joseph Kiwanuka and the Great Benedicto Kiwanuka. His special charisma has made him an icon among the nation’s top elite and a real celebrity among the ordinary folk.

I was in the OBs Pavilion on SMACK’s centennial day celebrations and I just can’t tell how much I was moved by the mighty cheers and applauses that marked the standing ovation which the more than 1,500 assembled alumni gave to the great teacher as he approached the pavilion to wave to them! This is the real man whose international fame has turned him into a near-worshiped individual commanding honour, glory and respect all over Eastern Africa where his former students are always seen in very high regard and supernumerary esteem, and all over the world where hundreds of them have been rightly recruited in jobs across the skill spectrum.

As a down to earth scholar, Prof J. C. Kiwanuka’s effect has grown on all fellow nationals who have invested a lot in his upending conventional wisdom that has always delighted in moral building. His 65-year old career as an accomplished educator of an enviable uptrend has been a real blessing to the entire region and has won him the crown of a primer and a first class originator whose contribution to Uganda’s field of education is virtually unrivalled! He was Minister of Education (1961 – 1962) and did wonders as Uganda’s first native to occupy such a high profile portfolio. At the Ministry, he won all hearts thanks to his accessibility and omnicompetent mastery of all files and records, and this enabled him to work untold wonders! He sent 300 students abroad for further studies; he promoted many senior secondary schools to HSC status; he introduced pension schemes for teachers, a thing for which he had indeed ardently fought when President of Uganda Teachers’ Association; he represented the country on many missions abroad including attending a special conference jointly organized by the UNESCO and the then incipient autonomous nations of Africa that intended to focus on giving a special impulse on Africa’s education, and Prof J. C. Kiwanuka was one of the most dynamic proponents of a system that would see Africa fully mobilized to offer opportunities to all including the illiterate who could then profit from the proposed rural technical / agricultural and trade schools that were projected to mushroom up all over the Black continent! This was indeed a thing which qualified Prof J. C. Kiwanuka as a great extrovert thinker, a prescient visionary and a superordinate prophet! Imagine now what Africa would be had this very original system, which was rejected through sheer emotional nescience, been adopted and put into action!

And fifty years at St Mary’s College Kisubi! Years of a very much profuse inspiration to all! Years which promoted the famous Prof J. C. Kiwanuka to an astounding degree of hypermania! And the crafty erudite educator wisely used the period to shatter all myths. In him the nation had its first graduate teacher becoming overnight the topmost best teacher of Maths and Geography with his candidates regularly outsmarting the nation in the Cambridge Exams! In him the nation had a leading unionist combating successfully for teachers’ rights. In him the nation would produce an efficient teacher-cum-politician doing excellently very well in both domains. In him the nation would eventually have a very efficient Minister quickly conversant with all grains of the Ministry’s duties and immense responsibilities! In him the nation would discover a great patriot who on quitting a cabinet post would quickly return to his ordinary routine teaching job! And in him the nation would finally discover an incorruptible statesman and nationalist and hero who sticks for decades and decades to his humble teaching job, materially enjoying nothing much out of it save serving his country via the love of its people whom he has abundantly helped to construct a future!

Fifty years at SMACK! A contribution to the college’s unparalleled triumphs and successes in practically every field! It was at SMACK that this God-loving citizen and focused genius exhibited his phenomenal qualities of a real supremo procreating dedication with a rare combination of intelligence, integrity, humility, determination, resolution and proclivity to hard work and serious-mindedness. His presence, together with that of the Brothers of Christian Instruction, continued to make SMACK the surest gateway to higher education and the most reliable jump-on point for further studies at university and in top academic institutions all over the world! With the extensive introduction of intensive science subjects, maths, languages, social ethics, and the so many extracurricular activities on programme SMACK was to affirm its super premier position as the most leading secondary school all over the region and also as one of the best of the type all over Africa! Wherever he is, a SMACK product is always very difficult to outwit, to outrank and to outsmart socially, academically and intellectually! All this is the aggregate total result of a committed full devotion to duty and responsibility in an academically very conducive environment. And this is SMACK in its classical sense as an institution that has always been a prime mover.

“45 days to J C’s 91st Birthday, the Almighty God called J C Kiwanuka to himself, we miss him, but thank God for the life of J C. May the Almighty God rest J C’s soul in eternal Peace”
Posted by williamkituuka.com at 11:25 PM