NUMBER INJURED IN KAMPALA SHOOTS TO 84! 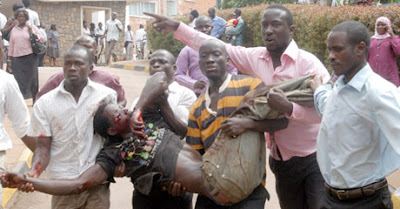 Demonstrators arrive at Mulago hospital carrying a wounded colleague who was shot during demonstrations in Kampala on April 29. Many people have been wounded. Photo by Joseph Kiggundu.
By Monitor Team
Posted Friday, April 29 2011 at 13:12
The ambulances with sirens blaring are arriving to deliver the injured at Mulago National Referral Hospital at an interval of 3 minutes, our reporter Justus Lyatuu reports.
A police an officer was among the total 84 registered at the medical facility by 12:30pm, many having sustained gunshot wounds. Children and women are among the victims.
Our Reporter Lyatuu says a policeman is making entries of the casualties’ particulars in a record book but has no clue how many are dead. Unconfirmed reports indicate at least four people have died, although the figure could be higher.
Earlier reports said three men were shot dead on spot in downtown Kampala and one taken to Mulago Hospital in critical condition after suffering gunshot wounds.
His legs were shattered, says a witness. Four other people suffocated by teargas collapsed and have been rushed to hospital after.
“There are many injured people here but I don’t have the figure of how many are injured or dead. We are too busy now,” says Mulago Hospital Spokesman Dan Kimosho.
The shootings occurred in Katwe, Owino and the Old Taxi Park. Bloody chaos flared up in that congested market due to agitation over earlier arrest of some of the vendors there.
Mercy Nalugo and Sarah Tumwebaze report that Jinja Road has been blocked at Kireka outskirt and a police teargas vehicle vandalised by an angry mob in the area. Other accounts, she says, indicate the riots erupted at around 10am following reports Besigye had died after his family was refused to fly him abroad for treatment.
Angry mobs started burning tyres in the middle of the highway and were stopping every car at Kireka, and pelting drivers who sped past.
Security forces moved in firing teargas and live ammunition while some police men were seen exploding the irritant inside people’s houses, forcing them out on the streets where they were promptly arrested and beaten.
The demonstrations have also erupted at Makaerere University where students are engaged in attack-and-withdraw fight. It is said some police have moved to lob teargas canisters into students’ halls of residence.
The mayhem has spread to the eastern Mbale town where there is running street battle between demonstrators and security forces. Our Bureau Chief, David Mafabi, reports that opposition supporters say they are demonstrating over the alleged inhumane and degrading treatment of opposition leader, Kizza Besigye, by security forces during his violent arrest on Thursday.
Plain-clothed and uniformed officers smashed the windscreens of the Land Cruiser carrying Dr Besigye and sprayed liquid pepper into his eyes and body, blinding him.
The situation in Entebbe and on the route to the airport appears to be spiraling out of control. A police truck has reportedly been burned, but the Force’s Spokesperson Judith Nabakooba says she is yet to crosscheck the information.
The area between Kajjansi and Zzana is now under virtual security lockdown, according to our staffer David Tumusiime. Enraged youth are burning logs, car tyres and using boulders to block the road while fighting back security crackdown.
MUHOOZI TAKES COMMAND AS CHAOS SPREADS ACROSS KAMPALA
Muhoozi takes command as chaos spreads across Kampala 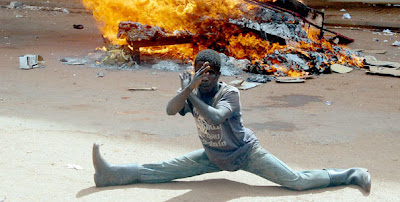 CROSS-SWORDS: An unidentified man taunts security forces during a demonstration near Kisekka Market in Kampala on Friday. PHOTO BY ISAAC KAASAMANI
Posted Friday, April 29 2011 at 10:55
Sporadic clashes between security forces and demonstrators that erupted early Friday morning spread across Kampala and its suburbs and gunshots are ringing from different neighbourhoods.

People coming into the city centre for work and or business are fleeing back home as police and military take over streets with armoured vehicles.
First Son Lt. Col. Kainerugaba Muhoozi, the commander of the Special Forces Group, takes command of operations at Kisekka Market in downtown Kampala, one of the bloody scenes.
Plain-clothed as well as uniformed security forces flush out journalists --- and some allege they were assaulted.
One person has reportedly been shot dead through the stomach in Kisekka Market in downtown Kampala and three others injured in Katwe suburb and Old Taxi Park.
The Bwaise, Bweyogerere, Kireka and Ntinda outskirts and sections of Entebbe and Masaka Roads are the most dangerous hotspots.
“I walked about 300 metres from my house but there was a lot of gun fire outside. So I and many others had to come back to our houses,” Don Wanyama, this newspaper’s chief sub editor says of the chaos in Kireka.
He says the road there connecting to Jinja is now cut off and this includes the Kinawataka short-cut. Our journalists on the ground say security forces have blocked them from covering the unfolding bloody scenes.
Passengers are being stoned in taxis as the situation degenerates. Our staff David Tumusiime says he was in a taxi and got hit with a stone hurled by a protestor.

Many traders have hurriedly closed shops and dashed back home, panicking.
“I came to town to do personal business but reaching the City Square, all people are running randomly. I also took off. There is a lot of teargas. It is worse at Kisekka Market,” says Peter Asiimwe.

“I don’t know what is happening and I hate this mess.”
Posted by williamkituuka.com at 2:26 AM