THERE SHOULD NOT BE WALK TO WORK ON 'GOOD THURSDAY'

As the public prepares for Easter, it will be wrong for the opposition to stage 'walk to work on Good Thursday.' Whether walk to work has achieved the targeted objective (s), it is very important to think about how it impacts on the people who are already impoverished. The opposition is aware of the ills inflicted on the innocent people, and we are yet to see how they come in to help the hundreds so far affected. I am of the opinion that the opposition is trying to whip a non responding opponent and i the circumstances, the innocent people are suffering the more.
William Kituuka Kiwanuka 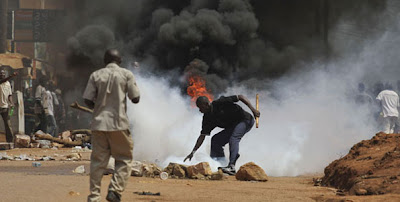 A Ugandan protester reaches down to pick up a tear gas grenade that police fired at a crowd in Kireka, a Kampala suburb, on April 18, 2011, during demonstrations that broke out after opposition leader Kizza Besigye was arrested in the morning following an attempt to take part in a "walk to work" protest against soaring fuel prices. Photo/AFP
By AFP
Posted Wednesday, April 20 2011 at 12:00
Uganda's failure to tackle popular concerns over rising living costs could see the country rocked by further protests, but the chances of a North African-style revolt remain slim, analysts say.
Four people have died over the past week, according to the Ugandan Red Cross, after opposition demonstrations over rising costs prompted a harsh crackdown by security forces and sparked rioting across the country.
On Monday opposition leader Kizza Besigye vowed further protests after he was arrested for the second time in a week as he attempted to walk to work in Kampala.
He was charged with inciting violence and released on bail.
The arrest of Besigye and around 20 other prominent opposition figures on Monday set off running battles between protesters and the security forces, as the police and army fired tear gas to disperse stone-throwing protesters on the outskirts of Kampala.
"The fact that the opposition is focusing on the issue of prices, which impacts everybody's livelihood, means they have struck a chord with the population," Frederick Golooba-Mutebi, a political scientist at Kampala's Makerere University, told AFP.
Annual inflation on food rose to almost 30 percent in March, while fuel price inflation rose to over 10 percent, according the Consumer Price Index.
Ugandan President Yoweri Museveni has vowed to crush the protests, dismissing the opposition demonstrations as "idiotic".
The government blames factors beyond its control, such as high international oil prices and recent droughts, for the price rises.
But Golooba-Mutebi said the state's brutal reaction to protests has only served to draw attention to the issue and warned unrest could escalate unless the government focused on dealing with the price hikes rather than just cracking down on the opposition.
"Simply responding to the protests with violence won't solve the issue," Golooba-Mutebi said.
"If they instead focus on dealing with the problem then that should render the protests irrelevant," he said, citing recent reductions in fuel tax in neighbouring Kenya as an innovative way of defusing public ire.
Museveni comfortably beat Besigye in nationwide elections in February and while opposition calls for protests over alleged vote-rigging failed to catch on, analysts said the government was caught "flat-footed" by the current food price demonstrations ahead of an expected cabinet reshuffle next month.
"The response by the government has been a total PR failure," Levi Ochieng, a Kampala-based, independent political analysis, told AFP.
Although the opposition were clearly politicising the price rise issue, Ochieng said the government had failed to reassure the public that they are dealing with the issue amid allegations of unnecessary state spending, including the recent purchase of two fighter jets and plans to spend over a million dollars on Museveni’s inauguration ceremony in May. 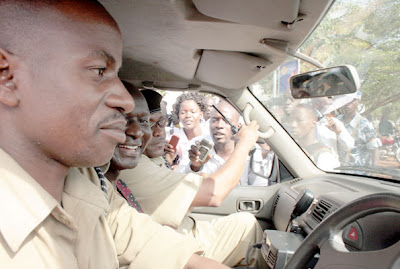 Uganda’s ‘Walk To Work’ Protests Will Continue, says Activist
Source: http://www.voanews.com/english/news/africa/Ugandas-Walk-To-Work-Protests-Will-Continue-says-Activist-120003879.html
A Ugandan pressure group is vowing to defy President Museveni’s ban on protests against food and fuel price rises. They say they will continue their call to walk to work to protest deteriorating economic conditions, and to show solidarity with the poor.
Ugandan president Yoweri Museveni on Saturday warned he will not allow the protests, which began last week, to continue. According to Reuters, he said they would worsen the economic situation because businesses, fearing attacks on their vehicles, would be afraid to bring food and fuel into protesting urban areas. Museveni blames drought for the rising food prices and said international events had pushed up the price of oil needed to deliver goods.
“We were not waiting for President Museveni’s permission,” said Mathias Mpuuga, the Masaka Municipality member of parliament-elect and the coordinator for the pressure group, Activists for Change (A4C).
“It has never been part of our program to seek his permission and consent for us to protest,” he said.
Mr Mpuuga said Ugandans have a right to protest and “Ugandans have an obligation to demand of him [president Museveni] and his government to do what other governments do in times of crisis.”
He said he is not surprised by the president’s reaction. “I would have been surprised if his message was different,” he said, “but this is his usual intimidation trick.”
For the last so many years, he explained, “Uganda is a country of the law of the rulers and not the rule of law.”
Mpuuga said it’s the duty of all Ugandans to enforce the rule of law as government would not grant them freedoms unless they fight for them.
He said despite the police brutality last week on peaceful people walking to work, the ‘walk to work” campaign will continue.
“We will not do anything different. Tomorrow (Monday) we will walk to work but this time round the walk to work campaign will not be a preserve of the capital, Kampala, but will spread throughout the whole country.”
Mpuuga urged the president to address the concerns of the citizens instead of demonizing the opposition.
Prices have been rising after drought cut food output across Uganda, while higher global oil prices have increased transport costs, pushing up food prices further in urban areas.
The consumer price index jumped 4.1 percent in March from February, pushing the year-on-year inflation rate to 11.1 percent, the fifth straight rise.
Security forces on Thursday fired rubber bullets and teargas to disperse a crowd of more than 1,000 led by Dr Kiiza Besigye, Museveni's closest rival in February elections. Besigye was injured in the march to the center of Kampala after a rubber bullet struck his finger.
Protests were also reported in the town of Jinja in eastern Uganda, Masaka in south western Uganda, and Gulu to the north.
Museveni said protests will do nothing to reduce the cost of oil, and urged Ugandans to use fuel sparingly.
Posted by williamkituuka.com at 6:58 AM