WHY SHOULD THE UN PLEAD WHEN A DICTATOR IS REMOVED? 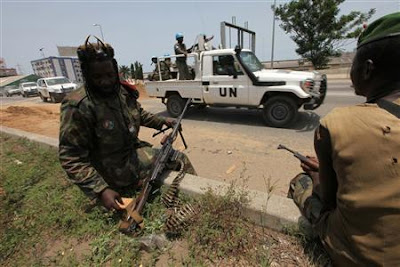 By Finbarr O'Reilly and Loucoumane Coulibaly
ABIDJAN | Thu Apr 14, 2011 5:20pm EDT
ABIDJAN (Reuters) - Ivory Coast's Laurent Gbagbo was overthrown by Ivorians, not by foreign powers, the United Nations said on Thursday amid rising criticism of its role in the removal of the former leader.
Gbagbo was captured this week by forces loyal to internationally recognized President Alassane Ouattara -- ending a bloody power struggle -- but only after French and U.N. forces pounded Gbagbo's heavy weapons stockpiles.
"The fundamental feeling is that (Gbagbo) failed to win the hearts and minds of the population here," the U.N. mission chief in Ivory Coast, Y.J. Choi, told reporters in Abidjan. "He underestimated the will of the people, and the credit must go to the Ivorian people."
Russian President Dmitry Medvedev said on Thursday that U.N. peacekeepers had taken sides in the conflict in Ivory Coast and called this a "very dangerous tendency," adding to criticisms by Gbagbo supporters that Ouattara is a patsy of the West.
France, the former colonial power in Ivory Coast, is also involved in Western military operations to destroy heavy weapons held by Libyan leader Muammar Gaddafi, amid a rebellion there.
Ouattara won 54 percent of the vote in last November's presidential election, according to U.N.-certified results, but Gbagbo rejected the outcome, claiming fraud in pro-Ouattara constituencies in the north.
Former rebels from the civil war of 2002-03 rallied to Ouattara's side and swept into the main city Abidjan in late March, triggering more than a week of fierce fighting that turned the city once known as the Paris of West Africa into a war zone.
U.N. and French attack helicopters fired on Gbagbo's heavy weapons during the conflict, including those located at Gbagbo's official residence where he was eventually captured.
"Gbagbo made mistake after mistake and in the end Gbagbo lost everything ..." Choi said. "He concentrated his forces in two spots and we found 800 soldiers in the residence area, all heavily armed."
"The basement was a cache for weapons including 500 M21 rockets and we intervened to destroy the rocket launchers and prevent a disaster. We don't believe it was outside forces that were responsible for ousting Gbagbo. We focused on the heavy weapons," he said.
Gbagbo is under house arrest in the country's north.

UNDERTAKERS
The post-election dispute killed thousands of people and displaced over a million, with reports of ethnically-driven massacres in the country's western regions.
In Abidjan on Thursday, Choi joined a United Nations convoy of about 50 vehicles through the battered city as two attack helicopters circled overhead.
In a sign of improving security since Gbagbo's capture on Monday, people and traffic circulated amid the rubbish and burned out cars generated by the recent fighting
U.N. vehicles patrol as soldiers from the pro-Outtara Republican Force of Ivory Coast (FRCI) sit at the Houphouet Bouagny bridge in Abidjan April 14, 2011.
Undertakers in battered minivans collected rotting corpses from the streets, where they have laid neglected for days in the sun, a Reuters witness said.
"It (security) is improving day by day," Choi later told the press conference. "People will be coming out more and more and we are continuing our patrols."
He said the United Nations was planning about 800 patrols per week and was assisting Ouattara's forces in protecting strategic locations, including the ports and banking infrastructure.
Residents in some neighborhoods heard sporadic gunfire overnight, and said looters were continuing to take advantage of the post-conflict lawlessness.
"The nights are a nightmare. We want the Ouattara government to quickly restore our security," said Romuald Teki, who lives in the upscale Cocody neighborhood.
Choi said the U.N. convoy on Thursday had steered clear of Gbagbo strongholds like the northern neighborhood of Yopougon and the downtown Plateau area.
"Yopougon is still not secured," he said. "I did not want to risk my staff being ambushed."
The Red Cross said bodies were still littering the streets in parts of Abidjan and mass arrests were reported.
"People are starting to obtain supplies, but not in every part of the city," said Dominique Liengme, the head of the ICRC delegation in Abidjan.
"Many who are injured or ill still cannot go to hospital because of the security situation, or because they lack transportation. Medical facilities that are still functioning are overwhelmed, and they lack supplies and personnel. In several parts of the city, bodies still litter the streets."
(Writing by Richard Valdmanis; Editing by Giles Elgood)
Posted by williamkituuka.com at 7:05 AM