MUSEVENI NEEDS TO BE WISER: CONFRONTATIONAL STRATEGY WONT HELP HIM 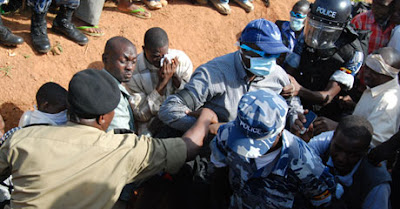 Besigye pulled out of the trench
The Baganda talk of "ndiwulira va mu kasooli," literally meaning that when danger is foreseen, it is logical to make wise moves. In the prevailing situation which hurts many, President Museveni would be wiser making a better advised approach to the situation. And he would seek to look for solutions other than some of his cabinet showing that they are indifferent. One reason why leaders are changed periodically is to get new blood to fight the country's problems. The current administration is immune to this, they can sit back and do what they want knowing that when there is an uprising, the police and tear gas are the solution, but it is being short sighted to imagine that this can be a solution for long.
William Kituuka Kiwanuka 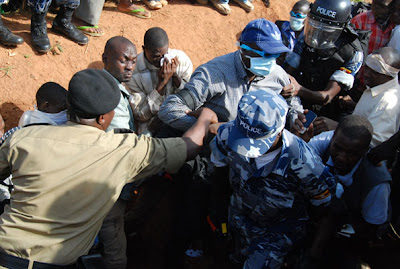 Dr Besigye (C) is dragged out of the trench. PHOTO BY ISAAC KASAMANI
By Monitor Team

Posted Friday, April 15 2011 at 00:00
At least 47 people injured in yesterday’ day-long opposition ‘walk-to-work’ demonstrations were by last night admitted to Mulago Hospital with those who sustained gunshot wounds, among them seven-months-pregnant Brenda Nalwendo, reported to be in grave condition.
Forum for Democratic Change party leader, Kizza Besigye, whom a combined force of military and regular police overpowered, together with his marching supporters at Kasangati trading centre, had a digit of his right hand broken after he was reportedly hit by a rubber bullet.
Defiance
He was treated at Kampala Hospital in Kololo, a city suburb. “I am not worried and I am going to demand my rights whatever it takes, however long,” Dr Besigye told this newspaper when still holed up in a roadside drain in Kasangati.
The Uganda Red Cross said seven-month pregnant Ms Nalwendo who was shot in Kajjansi was in critical condition. Mulago Hospital spokesman Dan Atwijukire told Daily Monitor last evening that she was in stable condition after surgery.
“The stray bullet hit her stomach,” said Catherine Ntabadde, assistant director of communications with the Uganda Red Cross. “We rushed her to Mulago, she is in theatre – we hope the situation gets better, but she was in terrible condition.”
Police Spokesperson Judith Nabakooba said Kampala Metropolitan chief John Kato had been hospitalised after angry demonstrators clobbered him. Three other uniformed men, one of them a military officer, were reported injured.
Sporadic violence erupted in the northern Gulu town last evening and soldiers at the nearby UPDF 4th Division headquarters pulled out in armoured cars and poured onto the streets and began shooting randomly to disperse residents protesting the arrest of district chairman, Norbert Mao.
Following a futile attempt to keep Mr Mao in custody in the face of unrelenting fight by a charged crowd, police last night reportedly dropped the Democratic Party leader/former presidential candidate, off at his home within town.
Like the violence that paralysed Metropolitan Kampala, Mukono, Jinja, Buikwe, Masaka, Hoima and Mbarara towns, pro-opposition supporters in Gulu also barricaded roads and lit bonfires in running battles with police and the army that exploded teargas and let loose volleys of bullets into the night sky.
Arrested MPs
Security operatives in some instances lobbed teargas canisters in shops and homes, particularly in Kasangati, Kampala’s Bwaise neighbourhood and Jinja town, forcing out occupants whom they later clobbered or arrested.
Last night, police announced in Kampala that they had taken into custody some 220 suspected demonstrators, among them six Members of Parliament and top political party figures.
Budadiri West MP Nandala Mafabi, his Kumi Constituency counterpart Patrick Amuriat, Mukono Municipality MP-elect Betty Nambooze, Kitgum District Woman MP Beatrice Anywar, Erias Lukwago and Isa Kikungwe of Kampala Central and Kyandondo South respectively, were charged at various courts but released on bail.
Grade I magistrate James Mwondha remanded JEEMA party officials; Asuman Basalirwa and Mohammed Kibirige to Luzira Prison and are expected back at Nabweru Court
Posted by williamkituuka.com at 11:58 PM