WHY DOESN'T KAIHURA GIVE HUMAN RIGHTS A CHANCE? 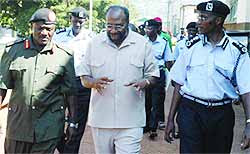 Major General Kale Kaihura 1st right
POLICE TO BLOCK DEMO
By Henry Sekanjako and Violet Nabatanzi
POLICE chief Maj. Gen. Kale Kayihura has said the Police will block the planned demonstration by opposition leaders in protest of the high fuel prices.
He made the remarks at the handover over of 20 Hydraform machines worth sh88m to the Police at Kololo airstrip on Friday
Kayihura said the country is currently facing terror threats, noting that holding such protests may pave way for terrorists to attack the country again.
Opposition members under a new pressure group Activists for Change on Thursday announced that they would hold a national walk to work day on March 11. 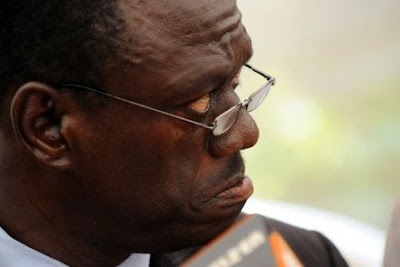 Ugandan police on Friday outlawed an anti-government protest called by opposition leader Kizza Besigye at the weekend, vowing that any demonstration will be "dealt with firmly."
But Besigye, who has warned that Uganda is ripe for an Egyptian-style revolution, said Saturday's demonstration would go on peacefully.
"I would like to caution any persons organising these illegal activities that as custodians of the public interest, the police shall not allow them to take place," police chief Kale Kayihura said in a statement.
"The police shall not allow selfish and egoistically inclined persons hiding under the guise of political activism to disrupt law and order or cause fear and despondency in the public and continually threaten the peace.
"Any person found engaging in such unlawful action will be dealt with firmly within the law," Kayihura said.
Uganda's opposition groups have repeatedly called for protests to denounce the February 18 polls in which President Yoweri Museveni was overwhelmingly re-elected.
The opposition claim the elections were riddled with irregularities, but the police have often outlawed their planned protests.
"These are going to be peaceful demonstrations and it is within our right as citizens to demonstrate so that our voice is heard," Besigye told AFP.
"We are not going to be intimidated. People have a cause to hold a peaceful demonstration. We are not going to be deterred."


PRESS STATEMENT ON INCREASING VIOLENCE DURING PUBLIC DEMONSTRATIONS
The Uganda Human Rights Commission is deeply concerned about the recent incidents of violence occasioned by a group of stick-wielding men commonly known as the ‘Kiboko Squad’ and between the Uganda Police and some members of the Inter-Party Coalition (IPC). The clashes which involved a group of women belonging to the Inter Party Coalition, the youth and other members of Inter Party Coalition, occurred in Kampala on June 14 and 9, respectively. These incidents were characterized by violence, assault, injury to persons, disrespect for the rule of law and subsequently abuse and violations of human rights.

The Uganda Human Rights Commission re-affirms that the freedom to assemble and to demonstrate together with others peacefully and unarmed and to petition is a fundamental human right enshrined in Article 20 (1) of the Universal Declaration of Human Rights (UDHR), Article 21 of the International Covenant on Civil and Political Rights (ICCPR) and Article 29 (1) (d) of the Constitution of the Republic of Uganda.
The idea that citizens should meet peaceably to consult one another about public affairs and to petition for redress of grievances is at the heart of democratic governance. The right to demonstrate and to protest on matters of public concern is a right ‘which is in the public interest that individuals should posses’ so long as it is NOT done to propagate violence or do anything unlawful.

Concerns of the UHRC
The Uganda Human Rights Commission is particularly concerned about the following developments:
i) Limitations on the right to demonstrate/assemble
Article 29(1) (d) of the Constitution provides for the right of every person to the freedom of assembly and demonstration together with others, peacefully and unarmed. Therefore, although the law allows the Police to limit the enjoyment of freedom of assembly and demonstration, the Police must have reasonable justification based on a prescribed ground and must be necessary.
Basing on Section 32 (2) of the Police Act CAP 305, on regulation of public assemblies, the notion of the breach of peace is central in justifying limitation of this right. However, the law provides that public alarm and excitement or noise alone does not consider a breach of the peace. Therefore in order to justify any preventive action to exercise the right, the possibility of a breach of the peace must be real. Imminence or immediacy of the threat to the peace should determine what action is reasonable. Therefore, curtailment of this core constitutional right requires clear and convincing evidence in absence of which the right should be exercised.
The Uganda Human Rights Commission reiterates the need for the Uganda Police to urgently integrate provisions of the Guidelines on Public Demonstrations in Uganda of 2009 which were developed by UHRC, with input of the Police and other stakeholders.
On the other hand, members of the public also have the duty to observe the law, and respect the rights and freedoms of others. As such, we strongly urge the members of the public to desist from violent and unlawful acts and respect the rule of law.

ii) Use of excessive force to curb violence
While the Commission acknowledges the difficulties faced by law enforcement officials while policing some violent situations and appreciates the enduring difficulties posed by balancing police powers and free expression when demonstrations turn riotous, it calls upon the police and all security personnel to use reasonable and proportional force in such circumstances. Although demonstrations might turn violent, as has been the case in some instances, it is still the responsibility of the police and other security personnel to act in a lawful and professional manner, using reasonable force as and when necessary in order to preserve law and order.

iii) Kiboko Squad
The Commission also noted with deep concern that during the recent scuffles involving demonstrators, some persons in civilian clothes were seen wielding sticks and beating up people at the Clock Tower. A similar incident occurred in April 2007 Kampala, when stick-wielding men appeared on the streets of Kampala and beat up demonstrators. The Commission carried out an investigation to establish who the ‘Kiboko Squad’ was, but the group was disowned by the Uganda Police. The report of the Commission made a number of recommendations among which was that government urgently investigates the ‘Kiboko Squad’ to establish its activities, membership and source of mandate. The Commission also undertook to educate the public on their rights, duties and responsibilities with regard to freedom of assembly and peaceful demonstrations. The Commission with support from the European Union carried out a number of dissemination workshops and radio programmes on Guidelines to Public Demonstrations in various districts.

RECOMMENDATIONS
1. The Commission commends the decision of the Uganda Police to launch a thorough investigation into the ‘Kiboko Squad’ and urge that the exercise is done expeditiously so as to bring the culprits to book. We condemn the presence of unknown stick-wielding groups and urge Police to restore law and order in the country, to avoid anarchy.
2. We strongly urge the Police to jealously guard its constitutional mandate as the sole institution charged with keeping law and order. As such the Commission calls upon the Government of Uganda to adequately equip the Police with the requisite manpower to carry out its functions efficiently and to always use legally recognised institutions to reinforce the Police, whenever need arises.
3. The Commission calls upon all members of the opposition to always express their grievances through channels that are within the confines of the law, such as dialogue, courts of law etc.
4. The Police in controlling assemblies have a duty to ensure that as far as possible non-violent means are applied before resorting to the use of force. Law enforcement officials should use force only as a last resort, in proportion to the threat posed, and in a way to minimize damage or injury.
5. The Police should acquire non-lethal incapacitating weapons for use in appropriate situations, with a view to increasingly restrain the application of means capable of causing death or injury to persons, such as live bullets and ensure that tear gas is used sparingly.
6. The commission should be supported to carry out continuous programmes of civic education among the public in order to disseminate the guidelines to public demonstration. We therefore appeal to government and development partners to fund the UHRC civic education programme.
The Uganda Human Rights Commission, therefore, strongly condemns and regrets the recent acts of violence and injury occasioned on some individuals as a result of the clashes between the Police, ‘Kiboko Squad’ and members of the public. The Commission also calls upon all leaders and the general public to remain calm and to avoid sentiments that may promote violence and disorder in the country.
Posted by williamkituuka.com at 9:49 PM