GOVERNMENT CREATED THE INFLATION; THEN THEY SAY IT IS BEYOND THEIR CONTROL!

When we go to school, we don't go there to waste time. Some people in government cannot understand simple economics. They thought that they would pour billions in the economy and it doesn't show! Now the situation has caught up with them. We went to school to learn and practice what we learnt, for some of these fellows, they thought this would not show. Money was seen been put into circulation and we are now reaping.

HIGH INFLATION BEYOND OUR CONTROL 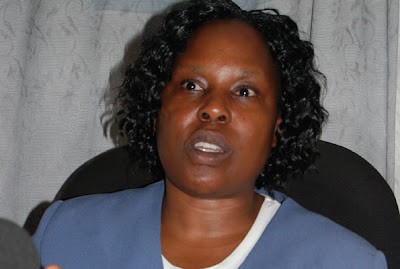 s Kabakumba Masiko addresses journalists in Kampala on Friday. PHOTO BY ISAAC KASAMANI.
By Gerald Bareebe
Posted Sunday, April 10 2011 at 00:00
The government has said it does not have the capacity to control the current high inflation rate which hit double digits last month despite pressure from the public that policymakers must intervene to curb the rising prices.
Information Minister Kabakumba Masiko told journalists at the government media centre on Friday that the current inflation, which is driven by surging food costs, is largely generated by external factors which government cannot control.
What the government will do, Ms Kabakumba said, is to hope that factors in the international system that are responsible for the current inflation change soon, while the Bank of Uganda “will continue with a cautious monetary stance to tame the second round effects of inflation without compromising governments growth”.

Why changes
“As you are aware, we have been experiencing persistent price increases, especially for food and fuel for some months now,” Ms Kabakumba said. “The increase in fuel prices is primarily attributed to the ongoing conflicts and political uncertainty in the Middle East….While these conflicts have not yet significantly affected production, they have nevertheless led to instability in the international markets and speculation, especially in the oil sector.”
She added that these political upheavals have caused domestic prices to increase to about Shs3,500 and Shs3,200 per litre of petrol and diesel respectively and that this has led to increase in domestic costs of production.
Ms Kabakumba, however, revealed that the government does not plan to intervene in the skyrocketing food prices because “the primary responsibility of feeding a family rests with the head of the family not the government”.
The high prices of commodities, including food and fuel, in the country have seen a rise in inflation since January. Last week, the Uganda Bureau of Statistics (UBOS) announced that the annual headline inflation rate for the year ending March 2011 rose to 11.1 per cent from 6.4 per cent, indicating a highest inflation rate since November 2009 when it was recorded at 11.9 per cent.
She attributed the increase in food prices to prolonged dry season in most parts of the country, in addition to the prices of petrol, diesel and paraffin that went up due to rising price of oil on the international market.
She said the government will provide food to the two regions of Karamoja and northern Uganda which were hit by drought early last year, while Ugandans in the other regions should buy their own food because Uganda “is not a welfare state that is obliged to look after every hungry person”.
Asked if government would prefer stopping the exportation of the scarce food items to offset local shortages, Ms Kabakumba who looked muddled and irresolute amid inquisitive journalists, said “Uganda is a liberalised economy where farmers are free to sell their products to wherever they will find higher prices.” “One thing the government has not decided to do is to control prices,” Ms Kabakumba said.
She maintains that the government will not even reduce taxes on fuel and other food items as a measure to reduce high prices because people who are clamoring for tax cuts are the same Ugandans who want drugs in the hospitals.

Hastily convened
Ms Kabakumba’s press conference was hastily convened in less than 24-hours after the country’s largest opposition party, the Forum for Democratic Change, launched a non-partisan pressure group to champion a non-violent campaign against the spiraling cost of basic needs, government opulence and hunger in many parts of the country.
Among the activities the group will engage in, starting soon, include a “walk to work” and a “walk to campaign”.
Already, the Uganda shilling fell through a series of all-time lows earlier this year, hurt by declining export earnings, speculative trading by offshore players and soaring greenback demand.
Makerere University economist Prof. Augustus Nuwagaba told Sunday Monitor yesterday that the current inflation has been made worse by the government’s poor economic policies, saying the government needs to broaden the tax base
Posted by williamkituuka.com at 2:14 AM