The issue now is not President Museveni talking to the opposition, it should be that time is now for him to change the mentality of I know it all and accept to take advice as well as listen to the views of the opposition. Museveni is sitting on a time bomb which he should have relized by now. The campaign time showed how desperate he was to get to power. Those of us who understand what is at stake in Uganda still wonder what miracle the NRM or Museveni used to get his over 60% which through any reasoning was not possible, but miraculously happened. Museveni is exploiting the poverty created by his Government to hold many poor people hostage, but he should realize that while he seems to see himself having all the power in his hands, like those before him, the mistakes made by his administration are so many that time is ripe to reconcile and forget about the mighty he assumes he is.
Meanwhile, the opposition by this time should have realized the strength of Museveni and his administration. There is need to get a solution to the divisions so that a united front is got to help not to fight the ills of Museveni administration, but to be used to deliver better services to the people. When the people see sense prevail among the opposition, they will see sense and possibly vote wisely next time. The people of Uganda MUST understand the pillars of Good Governance, and not be taken by Museveni's promises. His time long expired and that is why the country has to evolve new leadership which is in line with democratic principles, not Museveni dictatorship. For, his role in the manipulation of the Uganda Constitution which led to the removal of term limits qualifies him a dictator.
William Kituuka Kiwanuka
PRESIDENT TO TALK TO OPPOSITION 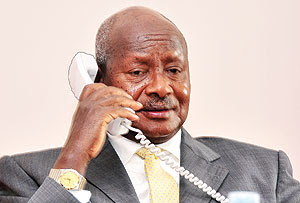 President Museveni takes a call during the interview at State House, Entebbe

By Cyprian Musoke and Barbara Among
PRESIDENT Yoweri Museveni has said he is ready to meet with the opposition to discuss issues of concern to them under the auspices of the Inter-party Forum for Dialogue.
In an exclusive interview with Sunday Vision at State House Entebbe on Friday, the President regretted that the opposition had failed to use the forum and have issues they are raising resolved amicably other than resorting to demonstration.
“We have the inter-party forum which has been there all the time, but most of these people have not used it. They have dialogue with anybody else, but not the inter-party forum. We are ready to have dialogue with anybody on anything,” he said.
He, however, added that since there was an election in which the National Resistance Movement won, it (NRM) had the responsibility of accounting to the electorate for any of the decisions it takes.
“Even if we have dialogue, the final responsibility of running the country lies with the NRM. We shall not under any circumstances give up our manifesto. We cannot say for example, that we are going to leave the construction of roads and dams to facilitate people driving cars because in five years’ time, we shall have to account to our population who elected us,” he said.
The opposition has for the last two weeks staged ‘walk-to-work’ demonstrations against high fuel prices and other commodity prices, which the President explained are due to international and regional factors, but are subsiding with time.
“They (opposition) have made their point; they should leave it to us to consider. If we don’t agree, we shall account in five years for them (opposition) to say that we (NRM) made a mistake, and should be voted out”. So why riot? Is rioting elections? There is no other route for them to attain power other than elections unless the Parliament impeaches me,” he said.
Museveni encouraged the opposition to go to radio stations and make their point like him since the radios are free, or go for rallies agreed on with Police. “Why do they get youths to go on taking people’s property?” he asked.
Posted by williamkituuka.com at 11:33 PM