THE NRM LEADERSHIP EXPIRED LONG AGO BUT GOD HAS KEPT THEM IN OFFICE! 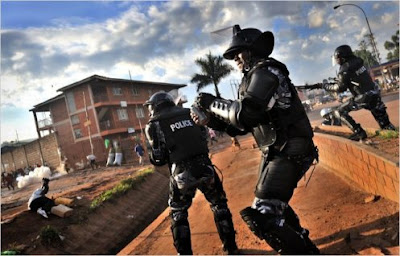 The firing of a Police Officer who did escort Otuunu is simply another blunder as expected of an expired Government. This Officer would instead be promoted. He promoted peace. Was there any body bothered, people were not disturbed on work and life went on normal. We in Uganda are unfortunate, that what is expected of civilized leadership is not what we get. The people of Uganda must have sinned so much to warrant the punishment we are getting from God of the continued leadership of the country by the misguided NRM leadership. Not long ago, an innocent child lost her dear life to trigger happy police personnel and thereafter, the IDP comes to tell the police not to use live bullets, but when the death has already occurred. We are aware of a child awaiting surgery after a bullet got logged into the skull. When can we have common sense prevail? The Police always give an excuse that those to demonstrate don't go to seek permission, now, what went wrong when Otuunu was escorted; that is the sensible thing to do more so when the government of the day is to blame for people's ills.
William Kituuka Kiwanuka

POLICE BOSS FIRED FOR ESCORTING OTUNNU
Andrew Bagala and Tabu Butagira
25 April 2011
The police leadership was last night under test after it emerged they suspended a senior officer for escorting UPC party leader Olara Otunnu during last Thursday's 'Walk-to-Walk' campaign.
Sources said Maj. Gen. Kale Kayihura, the inspector general of police, ordered Jinja Road Police operations commander, Alphonse Mutabazi's interdiction, accusing him of guarding the politician instead of halting his trek.
It is understood Mr Mutabazi has been indicted for disobeying lawful orders contrary to Section 18(1) of the police disciplinary Code of Conduct.
In his suspension letter, the IGP, who last Thursday reportedly placed a personal telephone call to commend Mr Mutabazi for avoiding potential chaos, said his junior officer was culpable for "escorting Mr Otunnu to work".
Elsewhere on that day, trigger-happy security forces allegedly shot dead a two-year-old baby in Masaka; clobbered as well as tear-gassed peaceful demonstrators and violently arrested FDC president Kizza Besigye who was charged and remanded to Nakasongola Prison.
Whereas other officers chose confrontation, Mr Mutabazi walked beside Mr Otunnu from Nakawa Market, a Kampala suburb, to UPC party headquarters at Uganda House in the city centre, placating opposition supporters used to police brutality.
Mr Otunnu, a former UN diplomat, after the march exalted the officer for his professionalism and readers have, in newspaper articles, praised his conduct, urging for his promotion.
It is understood the positive rating instead fuelled Mr Mutabazi predicaments, compelling his supervisors to dump him
"Police's work is not to escort walk-to-work protestors," Gen. Kayihura reportedly said in a U-turn, echoing a similar terse statement by President Museveni.
The suspension presents a headache for ground commanders whom Gen. Kayihura is quick to humiliate by punishing in public if they go wrong, a manoeuvre observers say is face-saving by a man accused of militarising the institution.
For instance, Gen. Kayihura dashed to Masaka on Saturday to visit a family grieving the brutal death of toddler Juliana Nalwanga who was shot in the head, offering Shs1 million and parading the suspected killer.
He subsequently moved RPC Fred Ssekiwere to an unspecified deployment at the Directorate of Operations in Kampala, replacing him with Mbarara DPC Simon Wafana.
Police Spokesperson Judith Nabakooba says also transferred is Kampala Metropolitan East regional commander Amos Gumisiriza, who now becomes Kyambogo University Chief Security Officer.
Ssembabule DPC Stephen Tanui takes over from him. Ssembabule police station chief, Abdallah Kitimbo, has been promoted as the DPC and so is his Mbarara counterpart Nicholas Ngozi.

2 - 3 YEAR OLD CHILD KILLED IN MASAKA CLASHES.
Written by Administrator
Thursday, 21 April 2011 16:51
A three - year -old girl was shot and killed in deadly clashes between protesters and security personel in Masaka
Six other people have been injured and are admitted at Masaka referral hospital.
David Nuwamanya, the Masaka Hospital Principle administrator, says the girl identified as Abby Narwanga, died shortly after she was admitted at Masaka hospital. She was shot in the head and died just as the doctors were trying to dress the wound.
Doctors say the Girl died of excessive bleeding. According to Nuwamanya, six other people who were allegedly shot during the protests in Nyendo.
Angel, a mother of the deceased baby was in total shock. she however managed an interview with the TUganda Radio Network reporter there.
Angel explains that she was preparing breakfast at her home, located in Kitaka Zone in Nyendo-Ssenyange division when soldiers opened fire at protesters near her home. Her baby was shot by a stray bullet.
But Aloysius Walusimbi, the father of the killed child says he witnessed soldiers open fire and kill his child. Walusimbi alleges that the bullet blew off her child’s head and opened the brains.
Walusimbi says they had locked themselves inside their house following the protesters when they soldiers shot rapidly at their house to scare away protesters.
Noah Sserunjogi, the Southern Region police Spokesperson, also says several policemen were injured in the protests but denies earlier allegations that some two cops have been killed.
Currently, Nyendo Township remains tense with UPDF soldiers patrolling the area.
Fr. Charles Ssebalamu, Bishop John Baptist Kaggwa’s private Secretary, says soldiers fired near Bishop’s residence during protests and disrupted prayers and business at Kitovu Cathedral.
Ssebalamu says the action by soldiers to shot at protesters who were hiding in the church and at Bishop Kaggwa’s residence has caused tension among religious leaders.
Last evening, Masaka Diocesan Bishop John Baptist Kaggwa, condemned the shooting and injuring of peaceful protesters.
In his Easter message, Bishop Kaggwa asked government to talk peace with protesters, because they have genuine grounds for their cause.
Bishop Kaggwa also asked protesters to join him during the Good Friday’s Way of the Cross to express their solidarity for all those injured and killed during protests.
Currently, soldiers have forcefully opened the roads blocked earlier on by protesters.

WALK TO WORK CAMPAIGN DAY 4: Live updates
Posted by Daily Monitor Reporter
on Thursday, April 21 2011 at 13:15
14:50 EAT: Police have confirmed the death of a two-year-old girl hit by a stray bullet after walk to work demonstrators and security forces clashed this morning in Nyendo, Masaka district. “The child was hit by a stray bullet and died at hospital,” said Noah Sserunjogi, Southern Region police spokesperson. Sserunjogi said the child, who he identified as Julian Nalwanga, was shot after police tried to dispel the angry demonstrators by shooting warning bullets into the air. "We also tried to use a bit of tear gas, but it was in vain," he said.
According to Sserunjogi, the two police officers who were set upon by the crowd are recovering at Masaka hospital. They are currently recieving treatment.
14: 20 EAT: FDC Party president Dr. Kizza Besigye has been transferred to Nakasongola civil prison after being charged with unlawful assembly. Dr. Besigye will next appear in court to answer to this charge on Wednesday April 27. DP President Norbert Mao was transferred earlier to the same prison this morning. Mao's court date is for May 2nd.
13:16 EAT: At least seven people have sustained serious gunshot wounds this morning in Masaka where police opened fired with live rounds to disperse protestors during the walk-to-work camapign. Several others suffered injuries in the clamp-down which also left a 4-year-old dead. The child died after being shot in the head and ribs. Reports also say two policemen were badly beaten and, according to eye witness accounts, may have died from the injuries sustained although police sources are denying that they have lost any personnel. The police say the officers were taken to hospital but could not tell journalists which hospital.
12:10 EAT: Columns of soldiers have filed into Masaka town centre as an uneasy calm returns. The Nyendo area of Masaka where two police officers were attacked and badly beaten – possibly leading to their death – is also returning to an uneasy calm. The morning’s running battles between the police and protestors participating in the walk to work campaign claimed the life of a four-year-old child who was shot in the head and ribs after police opened fire with live rounds into a crowd of civilians. Two adults were injured in this same shooting incident. Other reports say civilians mobbed two police officers and badly beat them up leading to their suspected death, although the area police spokesman, Noah Serunjonjji, disputes the suggestion that his colleagues have been killed.
11:45 EAT: Kampala City centre is reported to under fire as police battle opposition supporters who are protesting the arrest of their leaders, Nobert Mao and Kizza Besigye. Former DP parliamentary candidate Eddie Yawe has been intercepted at Post Office. He had a crowd of supporters moving along Kampala Road reportedly headed to Luzira Maximum Prisons to demand the immediate release of Mao and his co-accused. People are clearing out of town as the protestors carrying placards complaining about the rising food prices engage the police. Teargas is being fired.
11:30 EAT: Dr Besigye has just been produced in a fully packed Nabweru Court. Journalists, members of his Forum for Democratic Change party and security operatives all crowd into the courtroom. Daily Monitor’s John Njoroge says the situation outside the court premises is tense as a growing crowd faces-off with police, army and other security individuals.
10:35 EAT: UPC Party leader Ambassador Olara Otunnu successfully walks to work escorted by Police. Otunnu was met by a police force led by Afande Alphonsi Mutabazi from Jinja road police station just outside Nakawa Main Market at around 9:10am. After a brief argument, Otunnu was allowed to walk to Uganda House where the UPC party headquarters are located. Mutabazi was subsequently congratulated by his boss IGP General Kale Kayihura.
10:25 EAT: Heavy military and police deployment outside Nabweru Court in Bwaise, a Kampala suburb, where Dr Besigye is most likely going to appear. Journalists have been barred from getting anywhere near the court building. A crowd is gathering alongside the roadside as the army patrols in two armoured vehicles and a light infantry vehicle. Daily Monitor journalists on the scene indicate that the court authorities may be waiting for the file from the DPP’s office before they proceed. It is not clear what crime he is going to be charged with.
9:30 EAT: IPC spokesperson and Kyadondo North MP-elect Ibrahim Ssemuju Nganda has been arrested at Kireka as during his walk to work protest
8:50 EAT: The Uganda prisons spokesperson Mr Frank Beine has told Daily Monitor that Democratic Party leader Mr Nobert Mao and his co accused were taken overnight and some on Thursday morning to Nakasongola prison because of the threats of some of their supporters to walk and camp at Luzira prison in protest. “For the security of other prisoners and himself, we took him far from here but we shall produce him later when the time to return court is due,” Mr Beine said.
7:30 EAT: A Daily Monitor journalist reports that Police have arrested FDC leader Dr Kizza Besigye for the third time this month and fired tear gas to disperse hundreds of Besigye’s supporters marching beside him after he disembarked from his car near Kalerwe Market to continue the walk-to-work demonstration. Dr. Besigye was charged earlier this week with inciting violence in protests over price rises and released on bail.
Posted by williamkituuka.com at 11:22 PM