TO MAKE A 1,017% IN THE AMOUNT FOR THE SHARING OF THE PRESIDENT IS SHAMEFUL 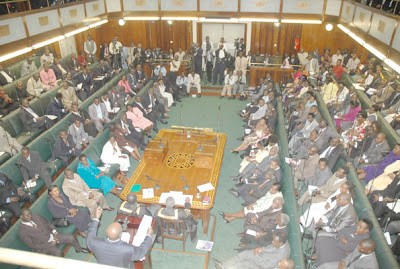 Is this Parliament fr the people or against the people of Uganda?
There is information that shs 295million had been budgeted for the swearing in ceremony of the President and the amount had been duly approved. To-day as has always been the case with the NRM, when campaigns are complete, they take Ugandans for granted. The military expenditures have greatly contributed to the appalling situation majority of Ugandans enjoy. How on earth does Government shamelessly wish to spend over shs 3 bn given that a few months ago shs 295m had been budgeted and approved for the same function? Does the NRM Government see sense in budgeting or is it a ritual? There is need to have the feeling of shame. When you are on Ben Kiwanuka Street and have to wait for hours for vehicles to move a few meters, you wonder whether a serious Government has reason to celebrate in such a city. There is need for those in Government to get to understand that the people they led are not a bunch of fools. The money misused is hard earned by the people of Uganda who expect better. Can the President have courage to address the people of Kampala at the old or new parks shortly after some heavy rain? We need to identify priorities and leave non-issues. The campaigns may have been what they were, but the people of Uganda want services; and it is as simple as that.

PARLIAMENT TO BLOCK SHS 3BN SUPPLEMENTARY BUDGET SET TO WEAR IN M7 IN MAY
SOURCE: http://redpepper.co.ug/welcome/?p=4159
By Our Online Team.

Parliament may block Shs. 3bn supplementary budget set to swear in President Museveni in May and Mps say the budget is a luxury and defies set procedures for a supplementary budget.
Last week, government requested parliament to approve a supplementary budget of shillings 151.6 billion for the recurrent, statutory and development expenditures.
Under the same supplementary budget the office of the president requested for shillings 3 billion to cater for the presidential swearing in ceremony. This amount is over and above the original provision for the swearing in the budget which stood at 295 million shillings.
Members of the budget committee say that the amount is unrealistic and undermines the budget process. It also dents government’s commitment to strengthen financial management and accountability.
Barnabas Tinkasimire, Buyaga County MP warns government not to ignore the problems affecting the country. ‘’At the moment the country is faced by high food prices, and double digit inflation rate’’.
Tinkasimire says that passing such budgets is not the reason why people voted legislators in office.
Lulume Bayiga, Buikwe South is equally angered by the move by government. He says there is no need for an extra budget for the swearing in cermoney. He says they will block the budget and only allow the amount budgeted for.
The Committee meeting which was chaired by Nathan Byanyima, resolved to call the Minister of Finance and the State House Comptroller to explain the need for such an amount of money. They are expected to explain the luxurious expenditure. Nathan Byanyima, Bukanga MP notes that there is no unforeseen nature as required by law.
The Public Finance Management laws and regulations allow government to incur supplementary expenditures but they emphasize that such expenditures should be of unforeseen nature. This is not the case with the 3 billion shillings set for a one-day event.
The supplementary budget comes barely two months after another supplementary budget of over 600 billion shillings was approved by parliament amidst protests from opposition MPs.
Posted by williamkituuka.com at 10:40 PM