BESIGYE ARRESTED WHILE NOT ON FOOT! 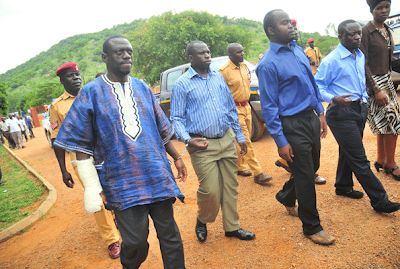 bESIGYE AT NAKASONGOLA ON WEDNESDAY
By Monitor Reporters
Posted Thursday, April 28 2011 at 11:09

Opposition leader Dr Kizza Besigye has been violently arrested again. This is the fourth time he is being detained in relation to the walk-to-work campaign against high fuel prices.

Soldiers, police and military intelligence personnel used sledge hammers, batons, gun butts and all sorts of implements to vandalise the opposition leader’s car. He was dragged out of his badly damaged vehicle at approximately 10.46 a.m. and slammed into a waiting police transport which sped off to an unknown destination. It is not clear why Dr Besigye who was not walking was accosted by the armed men. Security personnel are fighting running battles with civilians in the Mulago-Wandegeya area. Scores have been injured.

Dr Besigye appears to have sustained injuries in the melee which also left one of his aides bleeding profusely from a head wound. International media and observers from foreign missions on the scene were seen capturing the events as they unfolded.
Posted by williamkituuka.com at 1:15 AM