DID I HEAR MUSEVENI CELEBRATION TO COST SHS 30BN

How can Museveni swearing cost the tax payer shs 30bn? That is madness. We all swa the monies Museveni put in the campaign much of which is undoubted tax payer money, he bought T-shirts for people whose Government has passed a judgment that they put on used clothings and these T-shirts must have been so many millions, that even today though the election is long finished, the poverty and in many instances still put on the T-shirts. We the democrats have no way to see Museveni out of power. Looks like he is waiting for a military solution by those who believe in killing people as the way to get state power and there after steal tax payer money for own comfort. It does not many the slightest sense given the state of the economy in Uganda to waste shs 30bn celebrating for the coming again of Museveni for another 5 years for he misery of majority of Ugandans. Can you imagine the capital city? No, we cannot have hopelessness go on. Fix the things which need tx payer money to be spent on. How well has the 2010/2011 Budget faired? Was it for fun? Let us be serious. Though we cannot get Museveni out of power, we want service delivery. The NRM machinery shouls stop day robbery of tax payer money and let us have value for money. Keep in power, have your guns every where, but let the machinery stop stealing money anlet us service delivery. No need to celebrate victory for some one who should have gone in 2006 nd is using the machinery he has created to stay in power. It disgusts.
William Kituuka Kiwanuka 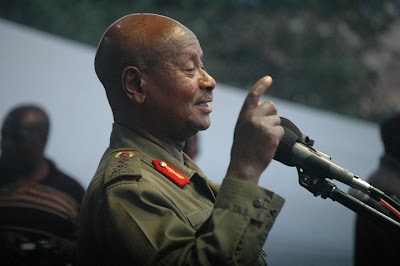 PRESIDENTIAL SWEARING-IN TO COST AT LEAST SHS 30BN!
Source: http://www.ekimeeza.com/?p=2094
The May 12 Presidential swearing-in ceremony will cost taxpayers at least Shs30 billion, according to a supplementary budget tabled in Parliament.
The money for the one-day event is part of the Shs151.6 billion needed by the government in both recurrent, statutory and development expenditures to meet unexpected spending pressures.
The budget
Tabled by the State Minister for Finance, Ms Ruth Nankabirwa, the supplementary budget will cater for the office of the President (Shs3 billion), the Ministry of Public Service (Shs56.5 billion) and the Ministry of Energy and Mineral Development (Shs92 billion).
A total supplementary of Shs56.5 billion will cater for pension payments of teachers, general civil service and military service staff.
Another Shs92 billion is an additional funding for the construction of Mutundwe Thermal Power plant.
Ms Nankabirwa said the funds provided by the World Bank for the construction of the plant were not enough.
The construction of the 50MW power plant is expected to cost Shs251 billion.
The tabled supplementary budget comes only two months after the Parliament passed a Shs600 billion budget which opposition politicians suspected was for funding the NRM campaigns.
It also comes ahead of another awaited supplementary budget for financing the purchase of fighter jets and other military hardware estimated at $740 million (about Shs1.7trillion).
The new Shs151.6 billion supplementary budget comes after Parliament controversially approved a Shs602.5 billion budget in the middle of preparations for the February 18 general elections.
The opposition and civil society condemned the act, alleging that the money would be used to campaign for President Museveni and bribe voters. The ruling NRM party has since denied the allegations. 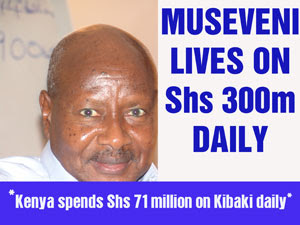 Written by Edris Kiggundu
[EKIMEEZA]-Government spent at least Shs 300 million per day to maintain President Museveni on official duty and his immediate family between July 2009 and December 2009, according to the National Budget Framework Paper (NBFP) for 2010/2011-2014/2015.
According to the NBPF, which looks at government’s expenditure over the past financial year and forecasts future spending, government spent Shs 54 billion in those six months and this includes providing for the President’s security detail, that of his family as well as his undisclosed welfare and logistical services.
And State House anticipates this figure to shoot to Shs 72 billion in the first six months of next financial year. Of the Shs 54 billion, Shs 11.6 billion was spent on logistical support and the President’s security, while Museveni’s countrywide tours to promote the Bonna Bagaggawale (Prosperity for All) programme in 33 districts cost the taxpayers Shs 7.7 billion.
State House, the figures indicate, spent Shs 10 billion to service the new presidential jet debt and to procure one principal and two support vehicles for the President.
This new jet, Gulf Stream 550, whose purchase generated public debate last year, was bought at a cost of $48.2million ( about Shs 88 billion).
During the six months, Shs 6.9 billion was spent on President Museveni’s visits to 17 countries, hosting of 10 heads of state, eight regional and international meetings, and hosting 17 foreign delegations.
The NBFP states that government also spent Shs 10 billion to enable Museveni attend 49 community functions and to facilitate State House payment of school fees for an undisclosed number of students. This is in addition to the Shs 1 billion used to renovate three state lodges and Shs 478 million to procure security, press and firefighting equipment.
Government’s expenditure on the presidency is likely to augment accusations that the President is living large at the expense of the taxpayer.
The Shs 300 million spent on the presidency a day is enough to pay salaries of about 150 Special Police Constables for a full year (with each earning about Shs 200,000 per month), or to build six decent classroom blocks at a cost of Shs 50 million each.
Yet it appears that this money is not enough. In January, State House lodged a supplementary budget request for Shs 18 billion, of which Shs 12 billion was to settle the outstanding debt arrears for the old presidential jet. Another Shs 350 million was required to pay allowances for staff on various duties.
The NBPF notes: “Within the available resources in the medium term 2010/11-2012/13, the sector through the Office of the President will continue to facilitate the presidency to enable it effectively execute its constitutional mandate and to manage the government policy and agenda…”
Compared with our richer neighbour, Kenya, according to their national budget of 2009/10, State House was allocated KShs 960 million (UShs 26 billion) for a full financial year to cater for President Mwai Kibaki’s household and other logistical support.
The Shs 26 billion includes money for maintaining the official residences of President Kibaki six State Lodges and State House Nairobi), for facilitating his 388 staff and the maintenance of 149 support cars.
This means that per day, the Kenyan government spent UShs 71 million to maintain Kibaki, four times less than the money Uganda spent to maintain its head of state a day.
Museveni’s Press Secretary, Tamale Mirundi declined to comment about the expenditure saying the budget is drafted by the Office of the President not Sate House.
President Museveni recently said in an interview with The Daily Monitor that his office deserves to be funded highly because he is the initiator and supervisor of major policies in the country.
“If you fund education but you do not fund this supervisor [Museveni], then what are you doing?” he retorted when asked about the large amount spent on maintaining him.
State House maintains a large security detail in addition to a large support staff. This expenditure on the presidency represents 24% of the total cost of public administration in Uganda, which at the moment stands at Shs 217 billion.
Next financial year, according to the NBPF, the cost is projected to increase to Shs 304 billion.
Budget priorities for 2010/2011
It is clear that the NBPF was drawn in tandem with the recently launched National Development Plan, which is supposed to be the key guide in the country’s pursuit of accelerated economic development. The five-year NDP is estimated to cost Shs 54 trillion.
According to the paper, Uganda is projected to spend Shs 6.3 trillion for the next financial year, Shs 300 million less than last year’s Shs 6.6 trillion.
The reduction is partly as a result of a decrease in allocation of resources to ministries such as that of Health, Works and Transport, Energy and Minerals, Tourism, Trade and Industry, and the legislature.
The Ministry of Works, which was allocated Shs 1.2 trillion last year, will get Shs 919 billion next year, while that of Trade which got Shs 47 billion, will now be given Shs 41 billion. The Ministry of Health allocated 737 billion in 2009/10, will get Shs 636 billion next financial year.
The Ministry of Education will be the highest funded entity next financial year, having been allocated Shs 1.1 trillion, a marginal increase from the Shs 1 trillion it received last year. The Ministry of Defence has been allocated Shs 488 billion, up from Shs 487 billion last year.
For the second year running, the Ministry of ICT has been allocated the least funds, Shs 11 billion, a nominal increase from Shs 9.5 billion it received last financial year.
The paper outlines five major areas of emphasis next financial year. They include infrastructure development (roads) and energy, promotion of science and technology, enhancing agricultural production, private sector development and improving public service delivery.
Posted by williamkituuka.com at 5:02 AM