AS THE SHILLING KEEPS LOSING VALUE, AN INSIGHT INTO THE EXCHANGE RATE IN UGANDA OVER YEARS

Article by Professor Erisa Ochieng
The exchange rate is the price of a currency in terms of another currency. It is the single most important price. It links the general price levels in the national economy with prices in other countries. It affects all other prices and touches the interests of all people. This makes it the centre of much controversy, with major changes in them attracting a lot of attention. Any arrangement that allows large and frequent changes in the exchange rate produces a range of disruptive and undesirable side effects. This is why no government will leave the exchange rate fluctuate wildly without intervention.

The exchange rate of a fully convertible currency is determined like any other prices by supply and demand conditions in the market in which it id traded. More fundamentally, such supply and demand conditions are derived in the short run from the demand of imports and supply of exports of a given country. In the long run, however, the purchasing power parity theory implies that changes in the exchange rates depend primarily on the relative changes in the purchasing power of domestic and foreign money. But the underlying assumptions of the purchasing power parity and the law of one price were shattered by the experience in the world during the period of generalized floating (1971 – 1982).

Exchange rate variations are expected to change the relative prices of importables and exportables and thereby induce shifts in production and consumption mixes. These changes in turn are expected to restore or maintain equilibrium in the balance of payments. Devaluation for example when it works properly can act as:
i.An instrument of monetary adjustment
ii.A device to tax some sectors and subsidize others
iii.An instrument to induce long term shifts of resources from some sectors to others.

The expected salutary effects of exchange rate adjustments can only occur if they are fully or partially reflected in the prices of traded goods rather than being offset by mere proportional changes in domestic prices.
The Less Developed Countries (LDCs) are price takers on the international market, therefore, an exchange rate change will only induce price changes for both exports and imports in local currency, but will not affect their prices in the foreign currencies. Also, the currencies of these countries are not freely convertible and their financial markets are rudimentary and so capital flows to and from LDcs are probably less responsive to conventional yield considerations. In the final analysis therefore, most LDCs can only use the exchange rate instrument to influence the internal working of their own economies and not the international economy. 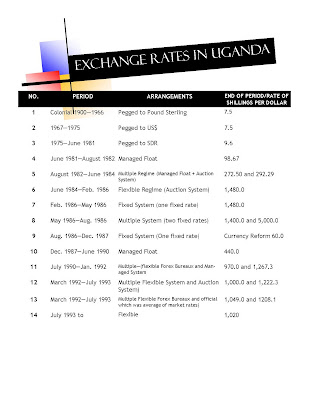 Posted by williamkituuka.com at 5:43 AM