Soon or later, Museveni may regret why his Government ever taught people the use of the AK 47. People are ready to challenge his administration, and the security personnel know that the people they are dealing with know how to handle the gun. In the circumstances, the President needs to move very carefully otherwise, the people are not the type who may not challenge him.
William Kituuka Kiwanuka 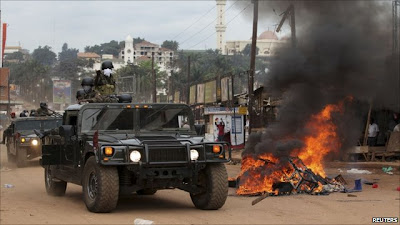 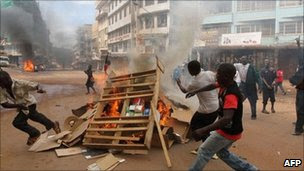 UGANDA RIOTS OVER KIZZA BESIGYE'S ARREST
BBC Story
Security forces try to quell the riots that broke out on the streets of Kampala
At least two people have died in riots in Uganda's capital over the treatment of opposition leader Kizza Besigye.
Security forces fired live ammunition, rubber bullets and tear gas to disperse protesters burning tyres.
Dr Besigye sought medical treatment after being tear-gassed in his car and bundled roughly into a truck when he was arrested on Thursday.
He later left Uganda for treatment in Kenya, and witnesses said he had to be supported as he boarded a plane.
It was Dr Besigye's fourth detention this month for his participation in a "walk-to-work" protest over high prices.
President Yoweri Museveni has said the walking campaign over the rise in the cost of living is illegal.

End Quote Brown Ndese protester
Ugandan Information Minister Kabakumba Matsiko told the BBC the situation was now "under control" and the unrest would not be allowed to carry on.
"I would like to reassure the world that the government is in charge, and we are going to improve the security situation. We're not going to encourage worthless demonstrations which don't have clear and genuine objectives to continue," Mr Matsiko said.
Pepper spray
After his arrest on Thursday Dr Besigye was charged with inciting violence but was released on medical grounds until 2 May.
The BBC's Joshua Mmali in the capital, Kampala, says Dr Besigye was taken to hospital from the court because he had been temporarily blinded.
On Friday evening, he was allowed by the authorities to fly to Kenya.
Our reporter says footage of the arrest was broadcast on Ugandan television and the video-sharing website YouTube.
It showed plain-clothed policemen beating up Dr Besigye's supporters, smashing the window of his car and dousing the inside with pepper spray and tear gas before manhandling him into a vehicle and driving off.
Rumours spread
According to Uganda's Red Cross, two people died in the trouble and 120 others were taken to hospital with injuries.
Internal Affairs Minister Kirunda Kivejinja said 360 people had been arrested and those injured had mainly been hurt by "stones, sticks and bottles".
Advertisement
Police fought with Kizza Besigye and his supporters during his arrest on Thursday
The police force was "within its constitutional mandate to restore law and order" by removing road blocks and "disengaging crowds", he told journalists in the capital.
Our correspondent says transport was paralysed and shops closed because of the widespread rioting and chaotic scenes.
Earlier on Friday morning, gunshots could be heard from different parts of the city and live ammunition was shot into the air in some areas.
The trouble started in Kisseka market, sparked by the anger over the manner of Dr Besigye's arrest and rumours that the FDC leader might have died.
The speculation about his death spread via Twitter and in Ugandan chatrooms.
"They arrested him like a chicken thief. We cannot allow such things to continue. Museveni must go," Brown Ndese, one of the protesters, told the Associated Press news agency.
The security forces were out in strength as the trouble spread across the city, our reporter says.
In some areas, the military beat up people who had resorted to walking to work because there was no transport, and forced them to clear the roads of debris from the burnt barricades, he says.
Rioters fuel a burning barricade during riots in Kampala, Uganda, on 29 April 2011 Dr Besigye has considerable support in the capital where many people were enraged by his treatment
The BBC's Ignatius Bahizi in the suburb of Kasubi said earlier on Friday morning that people were fleeing the area and vehicles were heading out of town to save them from damage.
He said when he tried to take a photo of the protesters burning tyres they turned on him and tried to attack him.
April's walk-to-work campaign, organised by several opposition parties over rising fuel and food prices, has been marked by clashes between protesters and the police and the arrest of opposition politicians.
Dr Besigye, who was shot in the hand during a similar recent protest, lost to President Museveni in a February election he says was rigged.
Before the polls, Dr Besigye had called for Egypt-style uprisings in the event of fraud.
Posted by williamkituuka.com at 6:20 AM