THOUGH WAKISO DISTRICT IS KYEYUNE’S BABY, HE WANTS IT SUB-DIVIDED 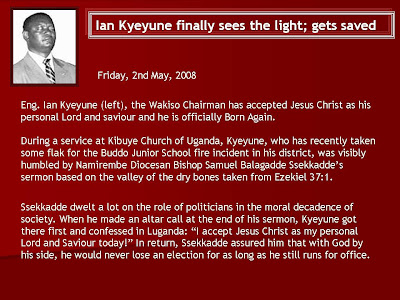 Ian Kyeyune lost in the NRM preliminaries, he decided not to contest as an Independent candidate; however, he is now an advocate of sub-dividing Wakiso district into three. Some of the councilors who are opposed to the sub-dividing of the district see it as Kyeyune’s greed. Kyeyune spearheaded the sub-dividing of Mpigi district into what came to be Wakiso district. He spearheaded a number of developments in the district, but looks like he does not see a future in life when not a Chairperson of a district!
This is where the likes of Kyeyune go wrong. Kyeyune knows very well that during his time in order to be able to make ends meet in revenue collection, he decided to effect the collection of revenue from people carrying sand and crops who have to pay before passing road blocks which are on a number of roads within the district; it is true these road blocks were abolished long ago when Hon. Mayanja Nkangi was Minister of Finance; in such circumstances, knowing very well that constructing a district headquarters is not an easy undertaking, Kyeyune’s desire to remain a district chairman is inducing him to look to all possible options.
The likes of Kyeyune are the people who would be boosting the construction industry in Uganda. They would take on the contracts which are currently taken by foreign registered companies. A district Chairman gets no money compared to what a person in such a line can generate. It is not clear why the likes of Kyeyune cannot eye taking on challenges and instead see themselves as glued to political positions for life.
William kituuka Kiwanuka 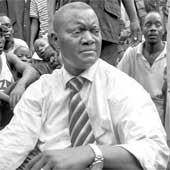 Wakiso district chairman Ian Kyeyune escaped with his life when he was rescued by Police from an irate mob, which showered him with soil and made him seat in the road.
The mob was protesting the state of the potholed and dusty Busabala Road.
Barely a day later, on a visit to try and resolve a land dispute between a Kampala businessman and the villagers of Mpeggwe in Kakiri sub-county, the Vice- President Gilbert Bukenya’s aides left a dust storm in their wake as they fled the scene chased by panga and axe wielding villagers.
And last week, a land agent in Kayunga was burnt to death when he had gone to show prospective buyers around a piece of land.
We should not mistake these for isolated cases of unruliness that get out of hand. We should see them as the precursors of a class struggle that has been nurtured by unbalanced economic growth, fuelled by endemic corruption and triggered by an increasingly hostile natural environment.
On one side of this struggle are the peasants and urban poor, who see no chance of elevation to a higher station in society for them or their children.
The focus of their ire are the middle and upper classes who wheeze around in four wheel drives, work in air-conditioned offices and wind down their days on the cocktail circuit washing down fish fingers and chicken wings with imported beers and wines.
You may look at this caricature of ostentatious living and console yourself that you do not belong, but from the worm eye view of the lesser privileged, who don’t speak English or live in a house powered by electricity or drink bottled beers, there is little distinction between you and the urban rich.
Posted by williamkituuka.com at 8:26 PM