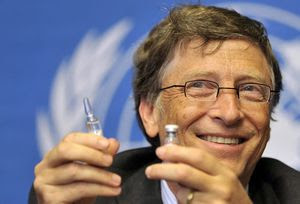 By Jeremy Laurance, Health Editor
Polio could be eradicated in the next two to four years, the billionaire philanthropist Bill Gates predicted yesterday as he appealed to world leaders attending a global vaccine summit in London to commit extra funding to protect the world's poorest children.

If achieved, one of the most dreaded diseases of the 20th century, which crippled thousands of children in Britain and worldwide, could become the second to be consigned to the history books, after smallpox was eradicated in 1979.

Mr Gates was answering questions from the public in a phone-in organised by Save the Children in advance of today's summit meeting of the Global Alliance for Vaccines and Immunisation (GAVI) which is seeking to raise an extra £2.3 billion to save four million lives over the next five years.
The extra cash is needed to fund two new vaccines which provide protection against pneumonia and diarrhoeal disease and have the potential to save one million lives a year.

David Cameron, who will host the summit, yesterday pledged to raise the UK's contribution to the alliance and defended the decision against critics within his own party, including Liam Fox, the Defence Secretary, who have argued that to raise overseas aid spending at a time of domestic austerity could lead to legal challenges.

Even sceptics about the value of aid admit that vaccination is one of the best and most cost-effective ways of protecting children. It is estimated that the lives of 20 million children have been saved over the past two decades. Mr Gates, who will address today's summit, has pledged $10bn (£6.3 bn) of his personal fortune to what he has termed the "decade of vaccines." But he knows that persuading parents of the benefits of vaccination is difficult in the face of cultural opposition, scares about vaccine safety and when the only "gain" is the absence of disease.

The polio virus was identified in 1840. Major epidemics began to occur in Europe in the 1880s, spreading later to the US and the rest of the world, sparking a race to develop a vaccine. Success came in the 1950s and polio started to decline. Three decades later the World Health Organisation, emboldened by its victory over smallpox, announced a global effort to eradicate the disease in 1988. By 2000 only a few hundred cases were occurring each year worldwide and today the disease is endemic in just four countries – India, Pakistan, Afghanistan and Nigeria. But the virus has so far defied all attempts to eradicate it. Mr Gates described how in India an "unbelievable effort" had been made to reach out to the poorest families to ensure they were protected. "There has been only one case [of polio] in India this year – and that looked like the most difficult country to overcome the disease," he said

Nigeria had been on the brink of eradication in 2003, he said, when a rumour spread that the vaccination caused sterility in women and was part of a plot to eliminate Muslims. "Leaders spoke out and we got a turn around – but [a scare like] this is a problem we are always worried about," he said.

After polio, malaria could be the next disease in the global vaccine community's sights. A vaccine providing 60 per cent protection is in final trials and there was a "realistic" prospect of its being available within three years.

"Then we will have to raise more money to make sure every kid gets it," Mr Gates added, signalling another challenge for GAVI.

GAVI is a vaccine-buying alliance representing governments, the pharmaceutical industry and organisations such as Unicef. It is estimated to have enabled the vaccination of 288 million children in the decade since it was established, and averted five million deaths, by speeding access to the jabs and persuading drugs companies to lower prices for poor countries.

Countries with most unvaccinated children