COULD BUKENYA HAVE GONE FAR WITH CHOGM DEALS WITHOUT OTHER PARTIES INVOLVEMENT? 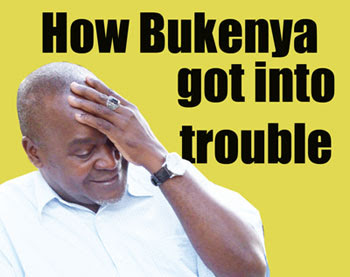 Written by Gaaki Kigambo & Hussein Bogere
Immense donor pressures on government and a confluence of miscalculation, misfortune, political intrigue, and plain thievery on the part of Prof Gilbert Bukenya have worked in concert to expose this former vice president as the first target in the firing line over the misappropriation of money that was voted to organise the meeting of the commonwealth heads of government in Uganda in 2007.
Since 2008, Uganda’s ‘development partners’ have been pressurising government to act on people implicated in what has come to be known as the CHOGM scandal. Repeatedly, the government asked for patience, claiming it was conducting investigations and that culprits would soon be charged.
This patience, strained by tough austerity measures in their own countries, run out sometime last year when a number of donors cut back on their budget support, in part because the government was not demonstrating willingness to check people who wantonly wasted public funds. Someone privy to high-level meetings in which foreign diplomats have been severally involved has told The Observer that CHOGM became some kind of obsession, with every other annual national review since 2008 mentioning it.
Foreign missions like the UK were under pressure from their own governments and people to explain why they were cutting back expenditure in frontline services like education in their own countries, yet in others where their taxpayers’ money went, there was continuous abuse of public funds that remained unchecked.
Our sources tell us the donors made it clear to President Museveni and the Inspector General of Government that they wanted to see evidence of fighting corruption. Both Museveni and Raphael Baku separately gave them their word.
Museveni’s March 11, 2010 letter to former Prime Minister Apolo Nsibambi, instructing him “to cause disciplinary and other action against officials who were found not to have followed financial and procurement rules and regulations as provided for in the Public Service Standing Order,” was inspired by his meeting with donors.
Museveni argued in the letter that the success of CHOGM notwithstanding, public officials who abused procurement procedures and mismanaged any resources allocated to them for the event should be punished.
“Government’s lack of action on the report is being perceived as if we are accomplices to the misdeeds. I have looked at the Auditor General’s report and a matrix showing the actions that can be taken and I find no problem with it.”
In the same letter, Museveni requested the Inspector General of Government and the Director of Public Prosecutions to carry out more investigations and bring the culprits to book not later than end of April 2010.
But Museveni did not stop there. He, in fact, made corruption a major theme of his campaign, vowing to come down strong on whoever was involved in misappropriating public funds. Understandably, few people believed him. So when it was reported that the IGG had referred the matter to the Anti-Corruption Court and that criminal summons had been issued against Bukenya, it was a surprise.
However, what was more surprising than the move itself was its timing, coming less than a week after he was dropped from office and three days after a report in New Vision in which he appeared to criticise some top government officials.
Another surprising aspect was that he was the lone suspect summoned, leaving out several other ministers implicated by the Auditor General’s report on CHOGM.
Indeed from Tuesday, Grade One Magistrate Sarah Langa having issued criminal summons against Prof Bukenya on charges of abuse of office and engaging in fraudulent practice, a number of people have expressed feelings that he is being targeted in what has been termed ‘selective prosecution’.
That Bukenya is selectively being prosecuted, as free-speaking Lwemiyaga MP Theodore Ssekikubo claimed on Tuesday, might well be true even if the IGG insists otherwise. In their hardly convincing explanation, his is one of nine files they have been investigating and, as the Inspectorate’s spokesperson, Ali Munira, told journalists on Tuesday, “it just so happened that” it was completed well ahead of all others that should be concluded in the middle of this month.
A reliable source in the IGG’s office told this newspaper on Wednesday that it’s true some other ministers will have their day in court too, but he cautioned that the public might be disappointed because certain prominent names have somehow extricated themselves from the net.
Interestingly, all these cases have been investigated concurrently, and until the rest come in, publicly or privately, the Inspectorate will remain on the defensive. What’s more, it remains tight lipped on who, other than Bukenya, is under investigations for fear of jeopardising the cases in any way.
Bukenya is accused of ignoring public procurement procedures in order to favour Motorcare (U) Ltd which emerged as the supplier of executive vehicles and motor bikes used to facilitate the summit.
Bukenya insists that time constraints dictated the decisions the sub-committee he chaired made and that he, personally, was not involved. Guilty or innocent, June 16 when he is expected to appear before the magistrate will be a watershed moment of a man who has shown a unique ability to stir controversy and who has come close to prosecution a few times in his otherwise stellar career.
Many will recall his outburst in 2005 that the IGG was not only investigating him behind his back but also unfairly because other ministers were not being followed.
Earlier on, while dean of Makerere University Medical School, Bukenya was accused of misappropriating funds in a matter investigated by the IGG. He was also accused of causing financial loss to NSSF by buying a house in Muyenga without formally bidding for it.
gaaki@observer.ug
hbogere@observer.ug
Posted by williamkituuka.com at 8:22 AM