HOW FAR WILL SSEBAGALA GO?

Ssebagala needs to get to his senses and do things the right way. He is a laughing stock. He has the money, but fails to get right legal advice.
Kituuka 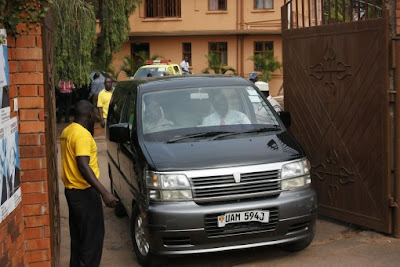 Former Kampala Mayor Nasser Ssebagala has been evicted from the residence of the Town Clerk along Ssezibwa Road amidst tight security. He has been claiming that he acquired the house with the blessings of President Museveni, and many pundits believed that Museveni had given the house to the former mayor as a “gift” after “seeing the political light.” Shortly before the recently concluded elections, Sebagala abandoned the opposition and “gave his behind” to Museveni. He moved around the country with the President campaigning for the ruling NRM.
Ssebagala’s eviction follows court orders after the Kampala City Council Authority Executive Director Jennifer Musis asked the former Mayor to vacate the premises on grounds that he acquired the house illegally.
Ssebagala who was locked up in an over a one hour meeting with Kampala Metropolitan Police Chief Grace Turyagumanawe argued that Kampala City Council resolution allowed him to buy the house.
However after the meeting he was convinced to leave the premises leaving behind his sons to negotiate with the Court Bailiffs amidst confusion as some of his supporters threatened to beat journalists that were covering the eviction.
During the second last council which Ssebagala chaired as Mayor, the councillors passed a unanimous resolution giving the house to Ssebagala which the current city administration refused, insisting that he took over the house illegally.
Part of his property has been transported on a truck reg. No. LG 0330-01 after he was driven away in a Black Toyota UAM 594J amidst tight security.
Anti-riot Police reamined heavily deployed at the premises. 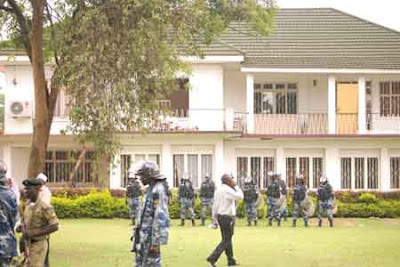 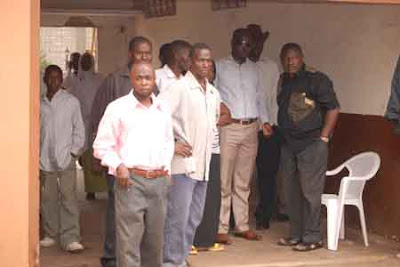 SSEBAGALA FINALLY EVICTED
A combined force of police and the Kampala City law enforcement officers have today Monday used force to break into the town clerk’s residence to evict former mayor, Nasser Ssebagala.
According to police, over 50 supporters of Ssebagala gathered at the residence armed with nails, hammers, stones and three 5-litre jerricans of petrol. The angry supporters were reportedly threatening to attack whoever tried to evict Ssebagala. On Friday, Police deployed heavily at the house located on Plot 1 Ssezibwa as Ssebagala was being evicted.
Kampala executive director, Jennifer Semakula Musisi later told the Kampala Capital City Authority (KCCA) council that the former mayor had indeed been evicted and the keys to the house were with Grace Turyagumanawe, the Kampala Metropolitan police commander.
But it turned out that Turyagumanawe was given old keys as Ssebagala had already replaced all the doors and padlocks in the house, as part of renovations.
Turyagumanawe, who led the eviction exercise this morning, told reporters that police disarmed Ssebagala’s supporters before locking the former mayor in a garage with instructions not to communicate with anyone outside.
At around 11:30am the KCCA law enforcement officers led by Vincent Katungi began to carry files, computers and other office items out of the house into the compound in the middle of a heavy downpour. The items were later transported to City Hall.
George Agaba, the deputy director of physical planning at KCCA, says the furniture from the house will be taken to the city stores until new directives are given.
Ssebagala insists he is the rightful owner of the property at the heart of conflict between him and the new KCCA leadership.
He says he has spent up to 175 million shillings on renovations and that this money has accumulated to over 400 million shillings. The former mayor says the house was valued at 4.6 billion shillings by Kampala City Council officials and that he paid cash deposit of 30 million shillings.

Police Surrounds Ssebagala’s Home As KCCA Moves To Evict Him!
By Our Online Team.

Kampala Capital City Authority (KCCA) law enforcement officers have moved-in to evict the former Kampala mayor from the property.
Ssebaggala has been living in the house located on Plot One Ssezibwa Road in Nakasero, which was the official residence for the town clerk of Kampala. The property has been at the centre of a dispute between Kampala Capital City Authority and Ssebaggala.
Kampala Metropolitan Police chiefs, Grace Turyagumanawe and Moses Kafeero are reportedly locked up in a meeting with Ssebagala inside the house.
Some supporters of Ssebagala are also camped at the house with some saying that the former mayor should not be evicted from “his property.”
Ssebagala says between April 2008 and January 2010 he wrote to local government minister Adolf Mwesige and his predecessor, Maj. Gen. Kahinda Otafiire and that the two ministers gave him a go ahead to possess the property.
He adds that on August 20th 2010 he wrote to President Yoweri Museveni over the issue and that the president responded in the same month authorizing him to take over the house.
While Ssebagala admits that Museveni raised concerns about the illegal sale of KCCA property, the president reportedly said the Sezibwa house was an exception.
Ssebagala early this month handed over office to his successor Erias Lukwago but refused to surrender Ssezibiwa house saying that he legally acquired it when KCC decided to dispose off some of its properties.
This didn’t go down well with Lukwago who asked Ssebagala to surrender Ssezibwa house and make a fresh application expressing his interest to buy the house.
Jennifer Musisi, the KCCA Executive director said that Ssebagala does not qualify to be a sitting tenant of Ssezibwa house because he was receiving a monthly housing allowances of shillings 2.5 million from KCC.
Posted by williamkituuka.com at 2:02 AM