SSEBAGALA'S PROBLEMS ARE A RESULT OF HIS POOR FORMAL EDUCATION

Ssebagala's problems and shame is all a result of not having had proper formal education and eventually falling into things.
William Kituuka 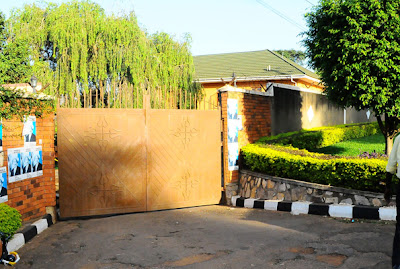 The Town Clerk house which Ssebagala wants to acquire. PHOTO BY ISAAC KASAMANI.
By Robert Mwanje

Outgoing Kampala Mayor Nasser Sebaggala yesterday rejected calls that he relinquishes ownership of the town clerk’s residence, arguing that the previous council offered him the property.

Talking to journalists after handing over office, Mr Sebaggala said it is only court that can compel him to leave the controversial house. He advised Kampala Capital City Authority officials to seek legal redress if they wish. “I have got a clear council resolution allocating me this house and I am ready to follow the procedure and pay the required amount of money. The good thing is that Lukwago (Lord Mayor) is a lawyer, let them go to court,” said Mr Sebaggala.

Mr Sebaggala, who was last week blocked by the Parliament’s Appointments Committee from taking up a Cabinet position over moral grounds, yesterday hastily handed over files, a computer, a vehicle and a motorcycle and stormed out of the meeting before signing the handover forms.

Incomplete process
Ms Jennifer Semakula Musisi, the KCCA executive director, said Mr Sebaggala’s handover was incomplete, adding that council will use “human and legal approaches” to rescue the town clerk’s residence. “He (Sebaggala) has no document to back up his ownership. If it was given to him as a gift, he would have had a certificate or a land title or a lease offer from KCC,” Ms Semakula said.

Lord Mayor Erias Lukwago advised Mr Sebaggala to re-apply for the lease of the house, insisting that it’s still a KCCA property. “It would be proper that you hand over the same to us, then you put in your request. And from here, I would request that we go there (to the house) because it’s still a city authority property,” Mr Lukwago said.

The second last council meeting that closed Sebaggala’s era as Kampala mayor unanimously backed the then deputy mayor’s submission offering the multi-billion residence to the outgoing mayor. The resolution said Mr Sebaggala should pay at least a Sh4.6 billion premium before owning the property seated on two acres of land.

Mr Sebaggala occupied the property alleging that the city administration failed to renovate his dilapidated office. He said the house is no longer KCC property. The former mayor intends to construct a five-storey structure on the approximately two acres land.
Posted by williamkituuka.com at 12:10 AM