PRESIDENT MUSEVENI SHOULD AVOID THE TEMPTATION OF RUNNING MINISTRY OF FINANCE 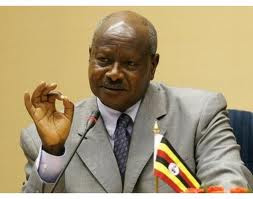 We were told the Primary Teachers' Colleges (PTC's) were closing due to lack of funds from government. This means that those concerned with Treasury matters could not readily have funds to release to see these Colleges run. If the President comes up and instructs the Ministry of Finance to pay the fear is that the officers may do because of his instruction but when the money is not there, the final position will be continued depreciation of the Uganda shilling. Leaders of Museveni type who have military background and at the same time don't want to leave office more often than not find themselves in situations where they misuse the power at their disposal and that which they assume and the final position is to lead their countries into worst financial situations.
MUTEBILE QUESTIONS GOVERNMENT EXPENDITURE
Sunday, 19th June, 2011

By David Mugabe
CENTRAL Bank governor prof. Tumusiime Mutebile has questioned the logic of continued public expenditure which does not focus on reducing poverty, saying it will not have an impact on livelihoods.
Mutebile said there is need for deeper debate on the country’s sound macro-economic stability and its failure to impact on reducing poverty in the country.
“It is not public expenditure that reduces poverty per se. It is sensible public expenditure designed to reduce poverty,” said Mutebile.
He made the remarks during a public dialogue at the Serena Hotel in Kampala where he was a panelist alongside former German president Prof. Horst Kohler.
Discussing the dialogue’s theme: “The role of the state and market for sustainable development in Africa”, Mutebile said the Government should intervene when the public sector fails.
Kohler cited Germany’s economic model called social market economy which encourages freedom, individualism and order resulting in strong institutions and reducing social tensions.
He said the model helped Germany reconstruct its economy after the Second World War. However, he added that Uganda must find a model appropriate for her.
“Every nation has a right to find out what is good for it. We don’t have a blue print or a lecture of what is good for Uganda,” said Kohler.
A book entitled: Economic Policies in Uganda and the principles of social market economy written by United Nations Development Programme economics adviser Evarist Twimukye was launched at the event.
Twimukye agreed with Mutebile on the weaknesses of public expenditure. “Spending badly is worse than not spending at all because if you spend sh800b (allocation to Karuma dam) badly, you can hurt everything, including your currency,” he said.
International Monetary Fund senior resident representative to Uganda Thomas Richardson recently shared the same view about how the Karuma dam project would be a real test for the Government.
He said it would serve as a yard stick for attracting future funds.
Other panelists who included entrepreneur Gordon Wavamunno, Uganda Investment Authority chief Maggie Kigozi and state minister for economic monitoring Henry Banyenzaki commented on the wastefulness and unnecessary spending in civil service.
Questions were also raised about the paradox of Uganda recording high economic growth yet unemployment is rising.
Kohler said the most important mechanism to social safety is jobs and decent incomes. 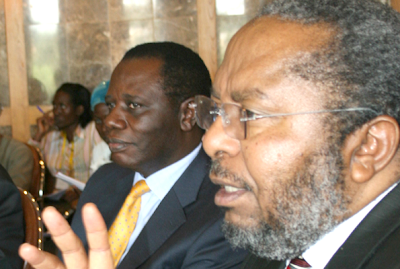 Posted Sunday, June 19 2011 at 00:00
What a week it has been! On the scale of survivability, one man stood out, even though Mr Daniel Kalinaki said in his weekly column that it was a “case of better late than never”, Bank of Uganda Governor Emmanuel Mutebile, outweighed the crowd by condemning government interference of what should be an independent institution.
Mutebile chose to speak to the Financial Times – a global leader in business and financial reporting. He outlined his frustrations and fears which underscore the otherwise wider belief among technocrats that the executive has overstepped its mandate as far as the operation of Bank of Uganda is concerned.
Mutebile’s better-late-than-never stance returned on Saturday during a public meeting with former President of the Germany and former head of International Monetary Fund Horst Kohler attended by other dignitaries. He described the current rampant poverty, widespread unemployment and lack of skills among graduates as a factor of the death of vocational schools and the emergence of “useless universities”.
Mutebile’s tenure ends in 2016, so is President Museveni’s – ‘when’ he decides not to seek a ‘fifth’ elective term that could effectively take him to 35 years in power ‘when’ he wins the election.
Professional direction
By saying what he is saying publicly, Mutebile is doing what all autonomous government organs ought to do – telling the Executive where to stop and providing professional direction to them.
Mutebile’s current outbursts can be likened to the actions of a certain saint in church history – Saint Maximilian Kolbe. He was a Franciscan monk who volunteered to die in place of a stranger in the Nazi-controlled concentration camp of Auschwitz. When Nazi guards came on a routine roll call calling on who would be the tenth person on the queue to die on the day he offered himself for a younger man whom the guards had picked on.
For now, he may not be a saint, but Mutebile is not known to say his thoughts openly even though he is quite candid when he chooses to speak his mind. He is aware that if left by itself, the Executive is capable of scampering all the economic gains made in the last years, but in choosing to speak to the FT, he was speaking to those who aid Uganda’s development.
The question though is why Mutebile’s is a lone voice amid miffed outcries of institutional suffocation by the Executive.
Over the years, the Executive has succeeded to stem off any protests from institutions making them mere rubberstamp organs of government. These institutions, including the judiciary, have been infiltrated by intelligence agents, who covertly collect personal information on technocrats, especially those who don’t seem to speak in government ululations.
Indeed to answer Kalinaki’s dilemma on our collective problem of not having enough people who are willing to “sacrifice their personal comfort by saying unpopular but correct things”, we have to go back and examine the extent of “Executive infiltration” of institutions which is by and large the evil force gagging these voices.
In the early days of the NRM/A, Mr Museveni promised to build institutions that would live beyond the stay of the head of State.
Until recently, it looked like he had succeeded to do just that, even though he is still in power after 25 years, with bodies like the Uganda Revenue Authority, Bank of Uganda, National Forest Authority, and others showing that they can deliver on their mandate without referring to the appointing authority.
The future gets cloudier for these institutions learning from Mutebile that he “is still fighting with him [Museveni]” over the independence of the institution that he heads.
Any head of a public institution will have to be as stone-faced and ‘arrogant’ as Mutebile to speak to the President about the excesses of the President’s Office. It is a sacrifice that politicians and technocrats need to live up to, especially in times like this when we are tethering our democratic ropes.
fmasiga@ug.nationmedia.ug
Posted by williamkituuka.com at 11:37 PM