MUSEVENI SHOULD CHANGE HIS MANAGEMENT STYLE

I find it a big joke that Museveni was upset by Malnutrition. How can he be upset when the policies of his Government are in actual fact causing major problems for the people of Uganda. Just before he was sworn in, he was there ensuring that the Parliament which was just days to leave endorsed his purchase of planes which to many of us are a waste of resources. We need these planes because of dictators like himself. When he got to power by the use of the gun, some people thought that there was to be a fundamental change. It is sad that the fundamental change we see is his not willing to leave office, yet other people would deliver better for the country instead of wasting resources in useless expenditures to the extent that now he wants to have people who are unethical in positions all in the name of their roles in seeing that he remains in office. During Amin's time in 1974 as an S.1 student at St. Mary's College Kisubi, i remember i was admitted to Entebbe Hospital, the food was there, the workers were doing a good job and on recovery I was seen off without having paid a penny to anybody, my parents did not need to know about my sickness, and there was decent food. What happened to all these infrastructure? This is the evil of men who come in uniform putting dirt to those they replace only to have them more corrupt. Who ever thought that during Museveni's time our children would go without lunch at school? Who ever thought that a balanced diet would be luxury for majority of Ugandans during Museveni's time? How can our children take sugarless porridge at school because it is expensive.
I for one no longer believe that leaders come from Gos, surely what we have to endure in Uganda is not God sent.
For the president having a motorcade which disturbs people's peace as well as very expensive to maintain, why doesn't he do most of the work from State House? With modern technology, he can surely talk to people on line and establish development or even get videos for developments around the country. When I look around, I wounder why our countries only embrace the donor policies and they fail to come up with methods to see everybody doing some work for which he/she would get some pay. It is sad to see the poor UPE now feeding into free HSC education when the children at that level are to drop out without any employable skills. Why is everything wrong? Uganda is reaping the fruits of embracing a dictator disguised as a democrat and people have either to be corrupt/thieves look for work out of the country or wait to die. i say, cry the beloved Uganda for you seem not to have a future!
William Kituuka kiwanuka 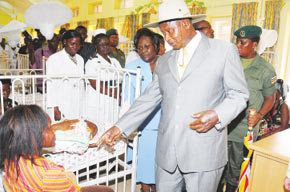 PRESIDENT Yoweri Museveni is upset about children suffering from malnutrition and has ordered the health ministry to address the problem.
He ordered the ministry to initiate awareness programmes on radio stations, targeting families on proper feeding of children.
Museveni was on Thursday visiting the Mwanamugimu Nutrition Unit at Mulago Hospital in Kampala. The unit, with a 70-bed capacity, admits 5-10 children with severe acute malnutrition complications daily.
The President said because of Uganda’s turbulent past, some programmes had not received the due attention they deserved.
The Mwanamugimu Clinic, which was established in the 1960s, operates under Mulago Hospital.
The President launched the unit as a government centre to champion teaching and research in child nutrition.
During his tour of the ward, Museveni interacted with the children’s mothers.
Museveni also said a mother from Matugga who had food in her home did not know what to feed her child on.
“It is good that I came here. We are going to eliminate this shame on our children.”
Dr. Elizabeth Kiboneka, the head of the unit, said since refurbishment, they have reduced the mortality rates of admitted children from 40% to 10.7% by March.
“The mother herself is over-nourished and she is healthy. But when I asked her, she told me the child had refused to suckle the breast milk because she first fed the child on sugary drinks and the child has now refused the milk,” Museveni revealed.
“We are going to work with the Ministry of Health to ensure that this stops. The place to stop malnutrition is the home and the seven million households in the country should be made the Mwanamugimu,” Museveni said.
Dr Isaac Ezzati, the Ministry of Health director for planning and development said that 38 per cent of children in Uganda are stunted due to poor feeding. Also a further 16 per cent of children are underweight while 6 per cent are wasted.
“Malnutrition is still a big problem in Uganda, affecting women and children. Malnutrition affects the learning capacity of children. When children get malnourished, they have problems in learning, immunity and they don’t develop well. As a result, the economic performance of the country can be affected,” Dr Ezzati said.
Dr Ezzati who resented the minister of primary health James Kakooza added, “Investing in child nutrition programmes makes sense because it reaps economic and health benefits for the country in the future.”
Museveni said that he would address the problem and would meet with the Assistant Commissioner in charge of nutrition in the Ministry of Health as well as other officials, to design programmes on local radios to reach out to mothers.
He said that radio stations in the country need to dedicate a few hours per week, of programmes that are of value to the local communities which they serve, in line with meeting the minimum broadcasting standards.
Museveni said, “This is a simple thing. Those radios which are abusing Museveni all the time, why can’t they in addition to abusing Museveni, dedicate two hours to tell mothers what to do? They (radios) will be directed to do it. If you don’t we close you. That is finished.”
Museveni said that the local communities need to access information in their local dialects about proper feeding habits and types of nutritious food, and the radios stations are better positioned to provide such information.
Posted by williamkituuka.com at 1:53 AM