THE GOVERNMENT OF UGANDA MUST ENCOURAGE WATER HARVESTING AT ALL LEVELS

It is all clear that the sensible thing the Government of Uganda should do is to seriously invest in water harvesting. Uganda has a lot that can be done to feed the people including the school children who are used to sugarless porridge at lunch time and many going without anything to eat. The problem is that President Museveni is concentrating on consolidating his power and stay in office as the population welfare deteriorates. This is clear in most parts of the country. The resources wasted on useless administration would in a case of another Government be put on improving the welfare of the people, unfortunately, on this, the Government of Uganda under Museveni scores badly.
William Kituuka Kiwanuka 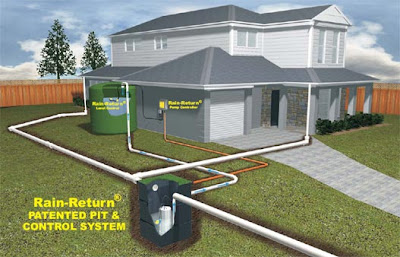 CAPTURE 100% OF YOUR RAIN WATER!
With less rain fall predicted now at last you can capture all the water from the roof.
Now with Rain-Return you can turn a typical rain water tank system into a complete rainwater harvesting system.
Rain-Return is a cost effective pre-packaged system ready to be installed. Typical domestic rain water systems collect less than 10% of the roof area while 90% of the rain water disappears down the drain. 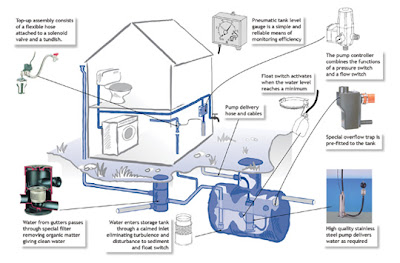 Water Harvesting means capturing rain where it falls or capturing the run off in your own village or town. And taking measures to keep that water clean by not allowing polluting activities to take place in the catchment.
Therefore, water harvesting can be undertaken through a variety of ways

In general, water harvesting is the activity of direct collection of rainwater. The rainwater collected can be stored for direct use or can be recharged into the groundwater. Rain is the first form of water that we know in the hydrological cycle, hence is a primary source of water for us. Rivers, lakes and groundwater are all secondary sources of water. In present times, we depend entirely on such secondary sources of water. In the process, it is forgotten that rain is the ultimate source that feeds all these secondary sources and remain ignorant of its value. Water harvesting means to understand the value of rain, and to make optimum use of the rainwater at the place where it falls. 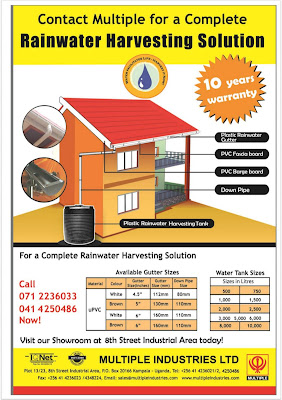 TRADITIONAL WATER HARVESTING
John Palmbach palmbajp@uwec.edu
Water harvesting can be traced back through human history almost as far as the origins of agriculture. Water harvesting is defined as the redirection and productive use of rainfall. In some incarnations it resembles a primitive type of irrigation. Unlike conventional irrigation, however, rainwater harvesting does not depend on a constant flow of water; it is totally dependent on rain. Basically, harvesting involves a variety of methods used to get as much water as possible out of each rainfall. Uses were nearly limitless when rain could assumed to be clean. These ancient practices sustained ancient people when conditions would have otherwise totally prevented agriculture. Many peoples in the world have continued to rely on water harvesting practices. Others have returned to it in order to relieve pressure on overburdened undergroundwater tables or municipal water systems. Some Western groups are discovering ways that rainwater harvesting can be used in our society to relieve stress on the environment, save money, and recharge groundwater tables.
Drinking Water: Traditionally rain water has been one of the few water sources known to usually be clean and safe to drink. Today water harvesters must be wary of pesticide contamination, high mineral levels, bacteria and other impurities in their runoff water. Filtering technologies have been used in the past and today to purify it by passing it through a series of rocks, gravels, and sands to scrub out contaminants. These methods have proven to be very effective.
Irrigation: Rainwater is the primary source of irrigation for crops around the world. Water harvesting techniques have been employed for thousands of years to get more water to the fields in order to improve crop production. This is the primary traditional use of rainwater harvesting. 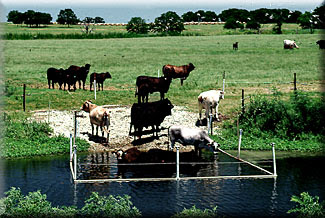 Sustaining Animals: Because of animals’ higher tolerance for bacteria and other impurities, harvested rainwater is often used as the primary source of water for livestock. Since cattle and sheep are well adapted to drinking rainwater, safer groundwater is often saved for human drinking.
Groundwater Recharge: This is one of the more modern applications for water harvesting. Rain runoff from buildings, parking lots and other man-made structures is funneled into seepage ponds or deep wells in order to directly recharge aquifers. 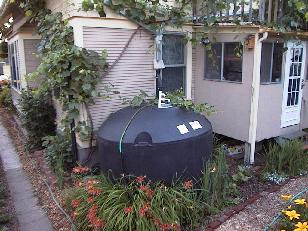 Modernized versions of water harvesting are making a comeback in North America with some environmentally conscious individuals and businesses. Small companies are popping up, especially in the Pacific Northwest, which offers to install water harvesting system in your own home. These rainwater storage systems modify the rain gutters that are already on many homes. The gutters are led to a large storage tank where water is held for future use. Water from the tank is filtered first for large objects such as twigs, leaves, shingle dirt, and insects. Next it passes through two micron filters witch eliminate tiny contaminants down to the size of many bacteria. Finally it passes under an intense ultraviolet light to finish sterilizing it. Then the water is ready for almost any home use. The Ersson family in Portland, Oregon installed the water harvesting system shown above. They use reclaimed water for nearly all of their domestic needs. Showering, laundry, dishes, and cooking all use reclaimed water. They do not yet use it for drinking water, but speculate that they easily could in the near future. 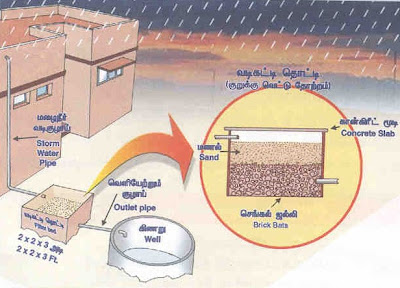 A second interesting modern use of water harvesting is known as harvesting for groundwater recharge. This system is similar to the previous system in that it gathers the water that would otherwise simply run off of your roof. It is different, however, in that instead of saving the water in a container it redirects back into the aquifer. This may sound overly simple or useless, but this is not just putting the water back onto the ground. Water that falls to the ground may make it into the undergroundwater reserves, but it will very likely be redirected downstream to a river or pond or (more likely in urban areas) enter the sewer system and be transported far away. Surface water is also much more likely to cause erosion as well as pick up runoff contaminants such as fertilizer and chemicals. The recharge process actually puts the water through a dirt and gravel filter with biological components to clean it and then directs the water down a deep well. This directly recharges the clean cool aquifers without the long delay it otherwise takes water to reach these depths. Water customers in arid and semi-arid climates are already being encouraged to use this technology. The Town of Panchayats Tennessee, for example, has provided the diagram above and encourages its citizens to use this technology.

The Future of Water Harvesting

Many communities in the past and present have effectively employed water harvesting to meet many of their water needs. Ancient technologies have shown themselves to be useful today, and modern water harvesting technologies are improving in leaps and bounds. If we are facing a future of increasing water demand, and possible water conflict, it may prove to be very wise to look to the past for a solution. All the water we need is out there. We simply need to cherish every drop, as our ancestors did.

Food And Agriculture Organization Of The United Nations