IF YOU ARE CLEAN, IT IS POSSIBLE TO LEAVE A NON TAINTED IN NRM GOVERNMENT

If anybody is corrupt in Government, this is no excuse doing what is unlawful. Ugandans in office ought to know that they are accountable to the people of Uganda for what they do while in office.
William Kituuka kiwanuka
Former VP Bukenya charged on two counts 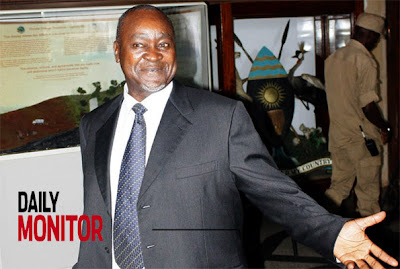 he Vice President Gilbert Bukenya leaves Parliament on Thursday soon after a walkout by Opposition MPs because they claimed the suspects in the Chogm scandal have been left to go scot-free. Photo by Nelson Wesonga.
Posted Thursday, June 16 2011 at 11:19
Former VP Prof Gilbert Bukenya has been charged this morning before Grade one Magistrate Sarah Langa in the Anti Corruption court with abuse of office and fraudulent practice and conspiracy. To obtain bail, a cash bail of shs50m is demanded from the Busiro North MP Prof. Bukenya as well as depositing his passport with the court. Prof. Bukenya is present in the court. Prof Bukenya's lawyers, Macdusman Kabega and Enos Tumusiime however strongly objected to the second charge claiming it was defective. They claim their client cannot be charged with that case and instead it should be the company directors of Motor Care Uganda Ltd to be appear in court to answer to that charge.
Prof. Bukenya is reportedly in the process of fulfilling all the bail conditions.
Prof Bukenya's two sureties, Mukwaya Jessy and Henry Kawesa were also required to hand over a 200million non cash bond. Mukwaya is listed as 36, a resident of Naalya and by profession a business consultant. Kawesa, 45, is a resident of Kakiri.
There was drama in the packed court room when 45 minutes into the plea hearing that began at 9:00pm Prof Bukenya interrupted to request permission for a bathroom break. This was rejected by the magistrate who instructed the reading to go on. A request for more stiffer bail conditions by the IGG Prosecutor Sydney Asubo that Prof Bukenya be restricted to a movement of not more than 100km was also ignored by the magistrate in setting the bail conditions.
Former Vice President Prof. Gilbert Bukenya faces charges of alleged abuse of office, in relation to the procurement of the executive cars for the 2007 Commonwealth Heads of Government Meeting in Kampala.
Posted by williamkituuka.com at 2:56 AM