Some relief groups such as Doctors Without Borders and Oxfam are urging the international vaccine agency to negotiate harder with drug companies for lower prices on vaccines to immunize the world's poor. 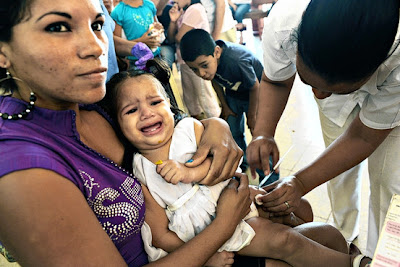 Agence France-Presse/Getty Images
In Nicaragua, which got a key supply of pneumococcal vaccines from GAVI, a child is shown earlier this year being inoculated against pneumonia.
They also want the cash-strapped GAVI Alliance, which will hold a fund-raising summit in London Monday, to kick drug companies off its board, fearing it has too friendly a relationship with the companies that sell it hundreds of millions of dollars of inoculations every year.
The pressure comes as the agency, which defends its relationship with the drug companies and the prices it pays for vaccines, says it needs an extra $3.7 billion if it is to carry out all its programs over the next five years and "avert four million future deaths by 2015." It has been pushing Western countries to contribute more money to its efforts.
Geneva-based GAVI relies on donations from governments, the Bill & Melinda Gates Foundation and other sources to buy vaccines. It often buys the medicines through Unicef, which oversees the bidding by potential suppliers.
As one of the world's biggest buyers of vaccines, GAVI has serious purchasing power, which some outsiders think it should be wielding more vigorously. Its "funding crisis was caused by many factors, including in some cases an inability of GAVI to negotiate low prices for key vaccines and to encourage competition through transparent pricing," Rohit Malpani, a senior policy adviser at Oxfam, said in an interview. "Many more children could be vaccinated due to GAVI's work if it was even more forceful in pushing for lower prices."
Daniel Berman, an official at Doctors Without Borders, said GAVI is hobbled by a sometimes "cozy" relationship with large drug companies. When GAVI was founded in 2000, few companies wanted to make vaccines because the business had low profit margins. GAVI felt a need to work closely with vaccine makers to ensure stable supplies, and "looked for win-win situations for industry and donors," Mr. Berman said in an interview.
He and other critics pointed to a 10-year deal GAVI signed with GlaxoSmithKline PLC of Britain and Pfizer Inc. of the U.S. for vaccine against pneumococcal diseases, such as pneumonia and meningitis, which kill roughly a million children every year. Under the 2007 deal, the companies receive $7 a shot for the first 20% of the inoculations they provide and $3.50 a shot for the remainder. A child needs three shots of the vaccine to be fully immunized.
The prices GAVI pays are much lower than the $70 or more a dose the companies get in Western markets, but are still a large drain on GAVI funds, critics say. Other childhood vaccines cost GAVI about $2 a dose.
The $7-a-shot price was designed to give the companies extra revenue to build new factories to make the vaccine, but critics question whether they needed the subsidy when they already are making healthy profits selling pneumococcal vaccine in Western markets.
A Glaxo spokesman said the company's price for the vaccine is "as low as we can go." A Pfizer spokesman called the company's price "deeply discounted."
Nina Schwalbe, GAVI's managing director for policy and performance, said in an interview that the agency feels it got a "pretty good deal" on the pneumococcal shots. She added that GAVI is encouraged by the number of lower-cost Indian producers entering the market, which will be able to offer a greater variety of inoculations in future years. "GAVI in the meantime can't afford to let kids die," she said.
GAVI cited price cuts it won from a range of companies on other vaccines. India's Panacea Biotec agreed earlier this month to lower its price by as much as 15% for a pediatric vaccine that protects against five diseases. Glaxo said it would cut the price of its rotavirus vaccine 67% to $5 for a complete course of shots.
Earlier this year, GAVI's newly elected chairman, former Norwegian health minister Dagfinn Hoybraten, said publicly that he wanted companies to take "substantial" steps to lower their prices.
GAVI, however, dismisses another demand of critics—that it take away the two seats drug makers hold on its 27-member board. The seats are currently filled by Glaxo and the Serum Institute of India Ltd.
GAVI says it needs to hear drug makers' views, and that it has strict policies requiring them to recuse themselves from decisions affecting their bottom line.
Rajeev Venkayya, director of global health delivery at the Bill & Melinda Gates Foundation—one of GAVI's biggest donors—has sat on GAVI's board and says he thinks the conflict-of-interest policy works well.
The Gates Foundation plans to announce a "substantial" new donation to GAVI on Monday, he said, adding that both GAVI and the foundation have been focused "on driving down prices of vaccines for a very long time."
Posted by williamkituuka.com at 2:44 AM