TIME FOR GOVERNMENT TO WAKE UP GIVEN LOW INCENTIVES 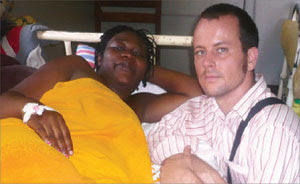 These parents are unfortunate to have lost a child at birth at Jinja Main Hospital due to negligence of duty of staff.A lot is said about the staff in health establishments in Government set ups,however, time is now for those in authority mostly so Mr.Museveni,to give priority to the lives of Ugandans. The cost of living is so high but the government assumes that these people will work on an empty stomach.there is need to address the issues surrounding the ever increasing cost of goods and services,more so that part of this is due to Government indiscipline. We want the health service providers to deliver but these in the first instance should be paid what is worth then we shall be able to demand that they deliver the services as expected.the firing of staff may not be the solution. We need to reward the efforts of these people and Government should have that as a priority, that way we shall safeguard the lives of Ugandans who use the health facilities.
William Kituuka Kiwanuka

Two health workers in Mitooma District have been interdicted by the Chief Administrative Officer over alleged neglect of duty and stealing government drugs.

Ms Rose Nabwire, an enrolled midwife at Kabira Health Centre III, allegedly refused to attend to an expectant mother, Ms Monica Kyomuhendo, on May 2, forcing her to deliver in the hospital compound without any expert attention.

A source, speaking on condition of anonymity said: “Police and residents pleaded with the midwife who was at the centre to wake up and help the woman who was in labour but she refused.” Also interdicted is Mr Joseph Akankwatsa, an enrolled nurse at Kyeibare Health Centre II, who was allegedly found selling government drugs at his clinic.

The deputy CAO, Mr Robert Abenaitwe, confirmed to Daily Monitor that the duo was interdicted on June 1. “They will be getting half pay until their matters are resolved. They will either be reinstated or dismissed,” he said.

Ms Nabwire was on May 6 arraigned before Bushenyi Grade Two magistrate and charged with neglect of duty and released on bail. The district chairman, Mr Benon Kalyeija, said the intervention was done to promote health service delivery in the district “where people have lost hope in the health sector.”
Posted by williamkituuka.com at 1:44 AM