WE ARE LOSING ENOUGH PEOPLE ON ROADS, CAN GOVT. TAKE ON ITS DUTY?

The Government of Uganda has privatized virtually everything and its regulatory hand not performing as would be expected. We need expired/tired buses off the roads. Government should once again own buses and only get managers who are not just NRM politicians. You can imagine how many people keep dying simply because Government has divested itself of the roles it should be performing yet the bus owners are in a tight situation to recover borrowed monies.
William Kituuka Kiwanuka
WEAK LAWS CAUSE OF ROAD CRASHES - POLICE TRAFFIC CHIEF
Bob Roberts Katende

6 January 2010
Kampala — In light of the increasing road carnage, The Independent's Bob Roberts Katende interviewed Police Commissioner for Traffic and Road Safety, Bazil Mugisha about the causes and the way forward.
What explains the increasing accidents?
Our situation has been bad for some time. I don't remember anytime when it was good. There are several factors which have led to road crashes because sometimes when we call them accidents is like we could not avoid them. These days the technical term is road crashes.
According to experts, 80 percent of road crashes are caused by human error- what a human being decides what to do or not to do. For example over-speeding; it's you who regulates the speed, it's you who decides to drive recklessly, it's you the driver who decides to drink, and it's you who decides to overtake recklessly and several other factors. All that is a result of other factors like training. How do we train our drivers, for how long, what do we train them in, do we have good schools, what is the curriculum, do we give them exams, who regulates the exams and after you have been given a permit who keeps monitoring how you drive? For example if you commit an offence many times what happens? Are measures punitive enough? Can we cancel a licence, are the fines enough to deter? For example if I earn Shs10m a month and I am fined not more than Shs200,000, do I feel a pinch? Some of these countries where you admire their driving it's not that they were naturally born good. It's the effects and consequences of bad driving. In some countries like Sweden, fines are calculated according to your income.
Why do accidents still happen at black spots yet the essence to mark them was to stop them?
These account for 10 % because of roads and engineering. These spots are prone to accidents like on Jinja Road, like at Mbalala, Kitega, Bulyantete. That's a result of road engineering. Everybody knows including the Ministry of Works that it's not good enough to have a smooth road. In fact we are increasingly getting more deaths on good roads. Of course what we are used to here are road signs but do our drivers follow those signs. Do they read or understand them?

Which goes back to you; aren't involved in their training?
We don't train drivers. Actually the curriculum and driving schools are under the Ministry of Works. It is supposed to establish, put regulations for driving schools, license and regulate them. Ours is enforcement.
Okay, your work is to implement. But you have also failed this because of corruption in form of kitu kidogo where offenders are let off the hook.
I can't rule that out. But it's not our policy. We are not failing because of giving us kitu kidogo. For example, we give out fines through EPS- Express Penalty System or take you to court. Every month we give over 10,000 tickets and that's not little money. It should be in the range of about 400m in fines collected. We are building a system, we acquired 14 computers and we have a computer lab, we are entering all the EPS information. We have computerised permits so our purpose is to make sure that when that information is entered in the computers we can be able to analyse how many offences you have committed. We shall request the Minister of Works to make a regulation so that if you accumulate a certain number of currency points automatically your licence is revoked. Of course we have a problem of equipment. Outside Kampala you may find I don't have more than ten motorcycles in the whole country. We also have few Breathalyzers.

What do you do to corrupt officers?
Last week we got three in Old Kampala. Almost a week doesn't pass, we got one in Fort Portal who was receiving a bribe, there's one in Gulu who was taken to court. There are many.

Despite those efforts the status quo has remained.
The problem of corruption is not for the police only. The moment you stop someone and tell them you are driving badly, they give you Shs5000 even before you say anything. Because they think it's cheaper if you are going to give them a ticket of Shs60,000. If you don't have a driving permit that is Shs100,000. He considers; "you give me a ticket and I am going to the bank to pay, that's extra time and it will be reflected on my driving permit." He says let me give this officer Shs30,000 whom I am told earns little even if he has not asked for anything. So people are actually enticing officers to receive bribes. To be sincere we are a corrupt community.
Cars in bad mechanical condition have also led to deaths
They could be contributing like five percent. First of all we work closely with the Ministry of Works and Transport. All the transport regulation measures are supposed to be made by the ministry.

How often do inspect these vehicles?
That's the work of Ministry of Works and Transport and I am not their spokesman. But I understand the contract has been given to a company to do pre-shipment verification in the countries of origin. We are in the process of enacting regulations for regular inspections. But for us as police we inspect vehicles that have been involved in accidents and also those we suspect are DMCs.

How often do you do that?
We have inspectors of vehicles and each region has one. We have eleven regions but Kampala could be having half a dozen. When we find a vehicle has problems, we tow it and deregister it. The Inspector of Vehicles lists down things you have to work on; it's not a matter of just doing repairs when you bring it back, he inspects it and see if the defects were put right and he clears you and you get back your number plate.

What measures are you taking to reduce accidents?
We shall increase visibility. We are getting our people on the road day and night and telling them that especially where there are broken down vehicles they should be removed. Every road going out of Kampala, we are putting at least three check points. We are emphasising on buses because they carry many passengers and they tend to move at night. We are checking them for speed and route charts because the route chart gives you the time you are supposed to be at certain point. We also make sure that if it's one way they don't make return trip. We expect to have more motorcycles, motor vehicles breathalyzers before the end of the year. 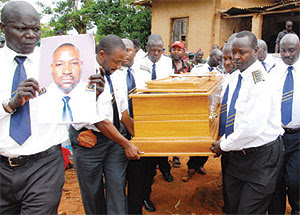 PRELIMINARY findings of a joint investigation into last week’s accident in Southern Sudan involving two Ugandan buses which left 28 people dead and about 70 others injured blame the crash on human error.
Uganda traffic boss Basil Mugisha, who visited the scene of the crash together with a contingent of both Ugandan and Southern Sudan police officers said the accident was caused by overspeedind and careless driving.
He said the Uganda Police will jointly investigate the accident with the Southern Sudan police.
“We went to the scene with our inspector of vehicles together with police officers from Southern Sudan and interviewed eye witnesses, recorded statement and drew sketches. Actually we did everything that we would have done if the accident had occurred here,” he said.
He said though the Sudan police will take the leading role, the Uganda police will complement their efforts given that Southern Sudan is still in the process of building its police.
Mugisha said though both buses were speeding, the head-on-collision occurred after Baby Coach veered into the lane of Bakulu coach which was heading in the opposite direction. Baby coach was heading to Kampala from Juba while Bakulu coach travelling in the opposite direction.
Twenty eight people, 17 of them Ugandans died when the two buses, Bakulu and Baby coaches collided head-on near Pajili village in Nimule, 40km from the border on Friday.
Bodies of 17 victims were transported over night from Gulu to Kampala while many of the survivors with various injuries were either transferred by ambulance or airlifted from both Nimule and Gulu to Mulago National Referral Hospital on Saturday.
Mulago hospital working together with the Police yesterday began handing over the bodies of the victims to their relatives.
Police spokesperson Judith Nabakooba yesterday said the bodies were handed over after being identified and a postmortem examination carried out by a team of police doctors.
Posted by williamkituuka.com at 12:41 AM