HOW COULD THE DRIVER FROM UGANDA SIDE HAVE FORGOTTEN THAT HE WAS ON THE WRONG SIDE? 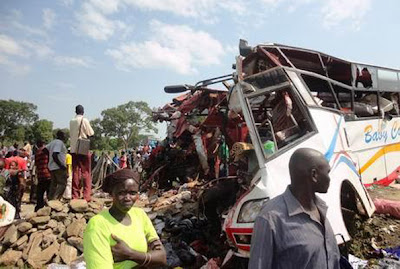 Shocked onlookers who had come to help victims gathered around the buses that collided killing 29 people.
By Monitor Team (email the author)

At least 20 Ugandans were among the 29 people killed in a head-on collision of Ugandan owned buses at at Arapi village, Pageri in Payam, 28 kilometres in Southern Sudan from the Uganda border.

By Friday evening (6pm), only 15 bodies had been identified; nine of them of Ugandan nationality, five from Southern Sudan and one Kenyan, Uganda Police spokesperson, Judith Nabakooba said. But some eyewitnesses put the number of dead above 40.

Police spokesperson, Judith Nabakooba couldn’t immediately tell the cause of the accident or the identities of the dead because they were waiting for a formal report from their counterparts from Southern Sudan.

“Even if we get the report, we have to inform that relatives of the victims first before passing them to the press,” Ms Nabakooba said yesterday.

According to a Ugandan Missionary worker in Nimule, Mr Denis Akena, 40 people died on spot and two died at the hospital. “Actually as we removed the dead bodies from the wreckage, there were several others who were still not in good condition. There are so many broken born scattered on the road and others trapped in the wreckage,” Mr Akena said.

Uganda Bus Drivers chairman, Mr Hannington Kiwanuka yesterday confirmed that two of their members, Godfrey Mukiibi and Nyanzi Kabanda, the drivers of both buses who had died in the collision.

“The bodies have been taken to morgue in a hospital in Nimule but we haven’t got more information about other people who have died because of poor telephone network,” Mr Kiwanuka said yesterday.

According to Mr Kiwanuka, the incident happened at around 9am when Nyanzi who was driving a bus belonging to Baby Coaches from Kampala to Juba used wrong lane thus colliding head-on with another bus of Bakulu Coaches that was being driven by Mukiibi. Mukiibi was driving to Juba to Kampala.

“Our members there are telling us that Nyanzi could have used the left side and in bend which is used by the Uganda traffic yet he was in Sudan where they use the right side,” he said.

One driver who was at the scene, Mr Willy Katende said that many passengers died but they have been blocked from accessing the morgue in the hospital.

“I found a few bodies at the scene and took some photographs. But I can’t tell the exact number of dead since no one is allowed in the hospital,” Mr Katende said.

A good number of Ugandan businesspeople trade in Southern Sudan and use buses as the means of transport. In May more than ten people died after a vehicle they were travelling was swept away by flood after it got stuck in sand on River Kaya in Southern Sudan.

And in 2009, at least 20 Ugandan traders were killed in an accident in Southern Sudan.

Motor accidents kill at least 3000 people a year in Uganda minus those who die abroad. The number of people who died in road accidents has increased from 2,734 in 2009 to 2,954 in 2010, which represents an eight per cent rise.

A total of 14,148 people (75 per cent) were hospitalized after they suffered serious injuries after they were involved in road accidents while 1,742 people suffered minor injuries.