The Government of Uganda has to get serious with agricultural exports. The country is at a moment in time when the currency is badly depreciated and many are not sure whether the shilling will recover. The NRM Government has taken private enterprise too far to the extent of badly hurting the economy. There is news that the Coffee Sub – sector is promising, however, some farmers don’t have the slightest sense of quality and as such end up mixing mature coffee beans with those that are yet to mature and because individuals move around buying from these farmers, the quality of Uganda Coffee is badly compromised. The way Cooperative Stores built during the Obote II administration that have been diverted to other uses is one of those strategies that are regrettable. The Cooperatives infrastructure which was in place worked as a positive vehicle in the marketing of Coffee, but the privatization has simply messed up the situation.
The way forward is for the Government of Uganda to wake up to the challenges of promotion of Coffee quality and that of other agricultural exports. Where Coffee is concerned, there is need to ensure that the farmers don’t harvest Coffee beans which are not mature. This is not easy and the 2nd challenge is how many farmers have no facilities for handling the drying of the Coffee beans. What Government can do is to get involved in collecting the Coffee shortly after harvesting. This can be done at collecting centres where the Coffee farmers could take the Coffee and it is examined to make sure that it does not have unripe beans. The Coffee would then be left at that centre from where it would be collected and taken to a drying centre. This being done to ensure that quality of Coffee is ensured. In this undertaking, the farmers previously complained about delayed payments, however, I am of the opinion that we are better placed to for example have Government put in place a mechanism where the farmers can get payment after delivery of the Coffee. This should all be done in the spirit that private players have played a big role in the devaluation of Uganda Coffee yet Coffee remains a key foreign exchange earner which Government needs to safe guard more so after the bitter experience the country has gone through of exporting devalued Coffee as a result of the negative role of the private players in the market.
THE KAWERI PLANTATION AND THE ECONOMIC STRATEGY OF THE UGANDAN GOVERNMENT
By Written by Gertrud Falk and Wolfgang Sterk
Edited by FIAN International
March 2004

The Kaweri Plantation is the first large scale coffee plantation ever established in Uganda. So far, coffee has exclusively been produced by small farmers. Thus, the project has a high symbolic value, expressing itself for example in the fact that president Museveni personally commissioned the plantation on 24 August 2001, together with Michael Neumann, the head of the Neumann Kaffee Gruppe. n 2002, the plantation won the Uganda Investment Authority’s (UIA) “Silver Investor Award”.1 The plantation does in fact fit perfectly into the government’s strategy to promote export oriented economic growth with the help of foreign investors.
The coffee sector is the mainstay of the formal Ugandan economy, accounting for about 70 per cent of its export earnings. In 2003, the country was the seventh largest coffee exporter in the world and the biggest in Africa. Other important export products are fish, tea, cotton and tobacco. The whole agricultural sector has a share of about 46 per cent of the gross national product (GNP) and feeds about 90 per cent of the population, most of them through subsistence farming.2
Since the beginning of the 1990s, Uganda government pursued a strategy of neoliberal economic restructuring and privatisation according to the tenets of the “Washington Consensus” and in close co-operation with the International Monetary Fund (IMF) and the World Bank. In 1991, the Investment Code was passed and the UIA was founded in order to attract foreign direct investors to the country.
In 2000, the “Plan for Modernisation of Agriculture” (PMA) was established as sectoral strategy of the
“Poverty Eradication Action Plan” (PEAP), forming the basis of the state’s agricultural policy. The aim of the PMA is “poverty eradication through a profitable, competitive, sustainable and dynamic agricultural and agro-industrial sector”, which is to be achieved primarily through the conversion of subsistence into commercial agriculture. The government considers the Kaweri plantation to be a key project in this plan.

UGANDA'S COFFEE BEAN EXPORTS MAY RISE 13% IN JUNE, GOVERNMENT BOARD SAYS
By Fred Ojambo - Jun 14, 2011 2:06 PM GMT+0300
Coffee exports from Uganda, Africa’s second-largest producer of the crop, may this month climb 13 percent from last year to 265,000 60-kilogram (132-pound) bags, according to the Uganda Coffee Development Authority.
The forecast is 4.6 percent higher than the 253,270 bags exported last month, the authority official, who declined to be named because he isn’t authorized to speak to the press, wrote in an e-mail today.
A secondary harvesting in the central and eastern regions, as well as the main crop in the western and southwestern regions has picked up momentum earlier than usual, according to the agency.
Shipments in the 12 months through September may decline to 2.6 million 60-kilogram bags, from a Sept. 20 forecast of 3.1 million bags, the authority said on April 13.
The revised forecast is 2.6 percent lower than 2.67 million bags exported last season, according to the authority. Exports from the start of the season on Oct. 1 through May declined to 1.75 million bags, from 1.78 million bags a year earlier, according to a tally of the agency figures by Bloomberg News.
Draught
East Africa’s third-largest economy had a draught from December to April, which the government blamed on climate change. More than 95 percent of Uganda’s crop is grown by small- scale farmers whose crop is predominantly rain-fed, according to the authority.
Uganda earned $243.6 million from the sales of the beans last season, down from $291.3 million a year earlier. Robusta beans, used in instant coffee, account for about 85 percent of the country’s annual coffee output.
The country consumes less than 3 percent of its annual output, according to the Eastern African Fine Coffee Association.
The East African nation plans to increase production to 4.5 million bags a season by 2015 through an ongoing replanting program, according to the agency. 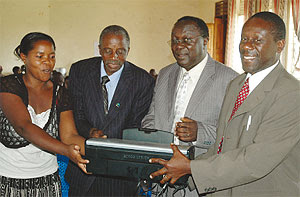 COFFEE farmers have called for government’s intervention to address the deteriorating coffee quality.
The farmers, under their umbrella group, the Ankole Coffee Producers Co-operative Union, accused coffee dealers of tampering with quality through poor handling.
They noted that Uganda’s coffee could lose value on the international market as a result, unless the Government enforces quality standards in the industry.
The farmers accused dealers of using crude methods, especially during drying. They claim that some businessmen mix coffee with stones.
The coffee farmers raised the concern at their 4th annual general meeting at Katungu Mothers Union hall in Bushenyi district on Friday.
They (dealers) are not farmers. Therefore, their interest is only in making profits. We appeal to the Government to intervene because when Uganda’s coffee loses market, it is the farmers to suffer,” appealed Eliab Ngambe, the union’s chairperson.
Ngambe said despite their efforts to organise farmers through reinstating co-operative societies, they were facing competition from the coffee dealers.
He said the dealers use wreckless means to gain an upper hand in the coffee business.
“Since our coffee is competing with other countries in the coffee business on the international market, the Government must enforce quality,” John Nuwagaba, the union’s general manager, said.
The commissioner for co-operatives development, Fred Mwesigye, advised the farmers to mobilise themselves to increase production to have a firm foundation to negotiate for good prices globally.
He said more farmers’ co-operative unions were needed as a measure to out-compete the coffee dealers.
“Uganda’s coffee used to be top-rated compared to other countries’ coffee, but it is sometimes also rejected because its quality has declined,” Mwesigye noted.
Nuwagaba pointed out that last season, the co-operative exported 700 tonnes of coffee, adding that they were targeting about 1,000 tonnes this season.
Out of the 13 societies subscribing to the Ankole Coffee Producers Co-operative Union, Abateganda Co-operative Society in Ntungamo district, emerged the top contributor to the union, supplying over 73 tonnes of coffee last season.
Meanwhile, Roselynn Karatsi reports that six factories have been closed in Kinoni in Masaka district for compromising coffee quality, according to the Uganda Coffee Development Authority (UCDA).
The closed factories are Mbuga Coffee Factory, which was operating illegally and had no husk chamber. Namugera Coffee Millers and Kabayo Coffee Factory had dirty premises and were found drying coffee on bare ground.
Others closed are Kiyemba House Coffee Factory, which was drying coffee on roadsides. Yamwe Coffee Factory had no husk chamber and was unhygienic, with an uncemented floor, while Kyabakuza Young Coffee Factory also had no husk chamber, according to UCDA field staff.
The action has led to loss of millions of shillings, since a single factory processes approximately 3,000kg daily, according to Anthony Sembatya, the chairman of the Masaka Coffee Processors.
He said, apart from hurting their businesses, it has affected workers.
Sembatya argued that instead of closing the factories, UCDA should sensitise the farmers in villages about proper coffee handling and quality.
According to UCDA regulations, buyers and dealers are prohibited from drying coffee on bare ground as it affects coffee quality.
Exporting poor quality coffee affects Uganda’s coffee earnings
Posted by williamkituuka.com at 1:21 AM