THE DEATH OF PROF. LULE'S WIDOW REMINDS US OF MISSED OPPORTUNITIES

Today, Wednesday, 1 June, 2011, the widow of the Late prof. Yusuf Kironde Lule will be buried at Kasenge along Nakawuka road. The death of the widow reminds Uganda of a missed opportunity of having the Late Prof. Lule who had been endorsed by the people of Uganda and was removed by opportunists who are after exploiting the country and its riches. Lule was welcome by Ugandans when the UNLF appointed him as Head of State and was in office for 68 days. Ever since Ugandans are surely in a vacuume because he is a leader in whom they had a lot of hope. may the soul of Hannah Lule rest in eternal peace.
William Kituuka kiwanuka 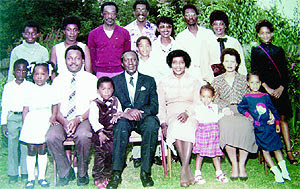 The family of the Late Prof. Lule.

The wife of the late President of Uganda, Yusuf Lule died peacefully on 28/5/11 in Kampala. Much loved mother, grandmother and a great grandmother. Thanksgiving Service at Namirembe Cathedral, 1/6/11 at 10 am and will be laid to rest at Kasenge at 4 pm

Burial arrangements
According to the announcement, there will be a funeral service at Namirembe Cathedral today at 10am followed by burial at 2pm in Kikajjo/Kasenge in Wakiso District.
Prof. Lule (1912 – January 21, 1985) was provisional President between April 13 and June 20, 1979 after the overthrow of Idi Amin. By last evening, family members were still locked in various meetings over arrangements for her funeral. The vigil was held at Lungujja in Rubaga Division.

WIFE OF FORMER PRESIDENT LULE PASSES ON
Posted by williamkituuka.com at 12:19 AM